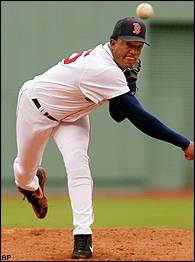 In the worst conditions he ever recalls pitching in, Martinez
improved to 10-0 with a 0.94 ERA in 10 starts against the Mariners
as the Boston Red Sox won 4-1 Saturday.

"The guy can pitch," Seattle manager Lou Piniella said.
"Whether it's the Mojave Desert or an igloo in Alaska, what's the
difference?"

There was nothing different about the outcome, but Martinez
couldn't explain his perfect record against the team with the
second best record in the majors, 29-13. Boston (28-11) is first.

"I just go out there and try my best," he said. "I always had
the support of my teammates who always seem to be right on top of
their game at the time we've played them and I'm pitching."

Martinez (6-0) struck out nine in eight innings and allowed six
hits and no walks as he lowered his ERA from 3.09 to 2.80. Of his
99 pitches, 74 were strikes. He went to a three-ball count only
three times on 29 batters.

And, in the first, he struck out the side on just nine pitches,
the first Red Sox pitcher to do that and the 35th in major league
history.

"Coming out of the bullpen, you're pretty warmed up and you
just want to let it go right away," he said. "I knew it would
take them a little while before they got loose. So I took advantage
of that."

Ugueth Urbina pitched the ninth for his 13th save in 14 chances.

The game was played despite a downpour that started before dawn
and ended about an hour after the scheduled start. The delay lasted
2 hours, 5 minutes, as both teams wanted to get the game in since
Seattle's last regular season game in Fenway Park is scheduled for
Sunday.

"I felt comfortable on the mound, but the conditions were
terrible, awfully cold," Martinez said.

When the game started, the temperature was 41 degrees and winds
were from the northwest at 23 mph. The grass had puddles but the
mound was dry. Boston manager Grady Little decided to go with
Martinez once he knew the game wouldn't be delayed after it
started.

"It's hard to get loose and to stay loose," Boston catcher
Jason Varitek said. "Both pitchers pitched very well in those
conditions."

The Red Sox took a 3-0 lead for the second straight day, but
this time they held it. One night after Seattle's 6-3 win, Martinez
made sure the Red Sox kept the best record in the majors.

The Red Sox scored twice in the first off James Baldwin (3-4) on
doubles by Jose Offerman and Nomar Garciaparra and a single by
Brian Daubach.

"If you give up a couple of runs," said Baldwin, who lost to
Martinez six days earlier in Seattle, "that's a lot of runs
against a pitcher like Pedro."

Trot Nixon, in his first at-bat since serving a four-game
suspension, hit his fifth homer of the season on the second pitch
of the second. He was suspended for releasing his bat in the
direction of Tampa Bay pitcher Ryan Rupe on May 5 after Rupe hit
two batters with pitches.

"A kid that plays that hard, a lot of his energy transfers to a
lot of other people," Little said.

Ruben Sierra's leadoff homer in the fourth made it 3-1. Boston
added a run in the fifth on a walk to Garciaparra and singles by
Shea Hillenbrand and Carlos Baerga.

After striking out the side in the first, Martinez set down the
side in order in the second without allowing a ball out of the
infield.

"Look, he's the best pitcher in baseball. What can you say?"
Piniella said.

Martinez allowed singles to Carlos Guillen and Ichiro Suzuki in
the third but got Mark McLemore to end the threat with a flyout to
center. After Sierra's homer in the fourth, Martinez retired the
next three batters.

In the fifth, he allowed a single to Ben Davis and struck out
two.

In the next two innings, Martinez was helped by double plays.
Sierra hit into one in the sixth after McLemore's single. In the
seventh, Mike Cameron was hit by a pitch but was doubled off second after first baseman Offerman caught a liner.

So Martinez remained unbeaten against the Mariners.

Game notes
Hillenbrand has a 12-game hitting streak. ... Martinez is
6-0 for the second straight year. Last season he didn't win after
May and, troubled by shoulder problems, was 7-3. ... Every Red Sox
batter got a hit except 2B Rey Sanchez.