BOSTON (AP) -- Derek Lowe doesn't give up many hits. In fact,
teams rarely get the ball out of the infield against him. 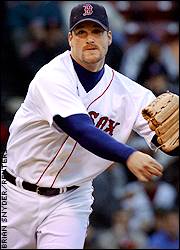 Only four balls went that far as he allowed two hits in eight
innings Monday night, leading the Boston Red Sox over the Chicago
White Sox 9-0.

"You want to get the guys out and I don't think any less of a
fly ball out than I do a ground ball out," he said.

His sinkerball is the best of his four pitches and has
contributed to some eye-popping numbers for the converted closer,
who failed in that role last year. In his previous start, he
allowed five balls to the outfield in eight innings.

But he's not letting it go to his head.

"It would be totally different if you saw somebody else doing
it. You'd say, `That guy's having a pretty good year,' " Lowe
said. "But it's me and I don't think about it. I'm just going out
trying to win a game."

He's already set a career high for wins. Boston's 30-11 record
is the best in the majors and the team's second best 41-game mark
in history.

"This team's consistent," third baseman Shea Hillenbrand said.
"You can't slack off" against any hitters.

The Red Sox got the runs they needed in a five-run fifth against
Todd Ritchie (3-5). Hillenbrand's three-run homer, his ninth of the
year, landed in the first row of the right-field seats just to the
left of the foul pole. It traveled just 303 feet.

Ritchie allowed more than three earned runs for the first time
in his 10 starts this season.

"I made mistakes up in the zone and they took advantage," he
said.

Lowe gave up a leadoff infield single to Kenny Lofton in the
first inning and a two-out single to Jeff Liefer in the eighth. He
faced two batters over the minimum, striking out seven and walking
two.

"As a closer he was a power pitcher," Chicago's Jose Valentin
said. "Now he's learned to pitch. You're always off-balance and
he's got great movement on the ball."

Rich Garces pitched the ninth and finished the combined
three-hitter.

Jason Varitek added a two-run homer, his fourth, against Kelly
Wunsch in the eighth.

But the story was Lowe as he pitched at least seven innings for
the eighth time in nine starts.

He pitched the first no-hitter at Fenway Park since 1965 in his
fifth start of the season, beating Tampa Bay 10-0.

In his first start, he took a no-hit bid into the eighth before
Baltimore's Tony Batista reached on a leadoff single to
Hillenbrand.

"I have confidence, but not to the point where I think I'm
invincible," Lowe said.

The suspense ended early Monday as Hillenbrand fielded Lofton's
high hopper but couldn't throw out the speedy leadoff hitter. Lowe
then got Ray Durham to ground into a double play and Magglio
Ordonez to strike out.

Lowe helped himself in the seventh with an outstanding fielding
play. Lofton led off with a walk, stole second and took third on
Durham's groundout. Ordonez then hit a bouncer in front of the
plate. Lowe rushed in to field it and flipped to Varitek, who
tagged Lofton out.

Varitek started the five-run fifth when he was hit by a pitch.
He took second on a wild pitch, third on Johnny Damon's one-out
single and scored on Jose Offerman's sacrifice fly.

Nomar Garciaparra singled Damon to third and Brian Daubach sent
him home with another single. Then Hillenbrand homered.

The Red Sox made it 6-0 in the fourth on doubles by Varitek and
Damon. They added a run in the fifth on a double by Daubach and a
single by Clark.

Game notes
Daubach extended his streak to seven games with at least
one RBI. ... Five Boston batters had at least two hits each through
five innings. ... Durham is in an 0-for-14 slump. ... Lofton has
led off 20 of his 42 games with a hit or walk. ... Boston leads the
majors with seven shutouts.