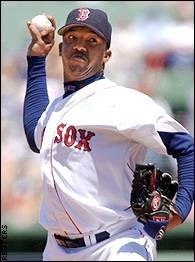 ''Both guys really battled,'' Diamondbacks manager Bob Brenly
said. ''I'd venture to guess that neither one of them felt that he
had his best stuff. But that just shows you the caliber of pitchers
they are.''

The Red Sox lost their fourth consecutive home game and are only
15-13 at Fenway -- no match for their 25-6 road record but still
better than the 0-2 mark with a 7.50 ERA that Schilling had posted
in his previous five games at Fenway with the Orioles and Phillies.

''I've never pitched well here. They've always had a good
lineup,'' Schilling said. ''I had good stuff. Good enough. But I
don't feel like I was ever in a groove today.''

Byung-Hyun Kim got the final four outs to earn his 16th save,
striking out Lou Merloni with a runner on third to end it.

Kim has saved both games in Arizona's first-ever visit to Fenway
Park, where Schilling took the loss when he faced Martinez in the
1999 All-Star game.

Martinez (7-1) struck out the first four batters in that game
and was picked as MVP, but he overextended himself in the effort
and went on the disabled list before returning to win his first of
two AL Cy Young Awards.

Saturday's performance wasn't nearly so dominant, raising
questions again about the health of the one-time stopper who didn't
win a game after May last year because of a frayed rotator cuff.

Martinez retired nine in a row at one point -- five of them on
strikeouts -- but he struggled at other times and needed 115 pitches
to get through six innings. His previous high this season was 116
pitches, but that took him through eight innings on May 12 at
Seattle.

In all, he gave up three runs on seven hits and two walks and
struck out 10 as Boston fell to 40-19 -- still the best record in
baseball.

''The biggest adjustment I have to make is realizing I'll have
to deal with this the rest of my career, or at least the end of the
year. I don't even know if I'm going to get through the end of the
year,'' Martinez said. ''I'm learning how to pace myself. ... This
is all new to me.''

Schilling allowed a first-inning homer to Carlos Baerga and a
smattering of singles before running into trouble in the eighth.

Merloni led off with a single off third baseman Craig Counsell's
glove, then Schilling, who hadn't walked anyone in 165 batters and
44 innings, walked Johnny Damon. After Baerga's sacrifice bunt,
Nomar Garciaparra walked and Mike Myers relieved.

Shortstop Tony Womack mishandled Tony Clark's grounder before
grabbing the ball to make the throw to second. Garciaparra appeared
to beat the throw in a very close play, but he was ruled out by
umpire Brian O'Nora. Merloni scored on the play to make it 3-2.

Jose Guillen answered Baerga's homer in the second to make it
1-0, then Junior Spivey hit an RBI double in the third to give the
Diamondbacks the lead. Arizona made it 3-1 in the sixth when
Erubiel Durazo walked and scored on Damian Miller's single.

Game notes
Jose Offerman singled in the second -- just his second hit
in 13 at-bats off Schilling. Offerman entered the game in a
10-for-72 slump. ... Brenly came out to complain when a fan swiped
Baerga's foul pop before Counsell could reach it in the third. A
replay appeared to show Counsell would not have caught it. ...
Boston's Grady Little came out to complain about the force out of
Garciaparra in the decisive eighth inning, also to no avail. ...
Baerga's homer was his first since Aug. 17, 1999. ... Offerman was
charged with an error when his dropped Spivey's foul pop in the
first. Spivey ended up striking out. ... Martinez posted
double-digits in strikeouts for the 82nd time in his career, the
55th time with the Red Sox and the fourth time this season. ...
Womack and Miller struck out three times each.