BOSTON (AP) -- Nomar Garciaparra found a unique way to celebrate
his 29th birthday: with three home runs in one game. 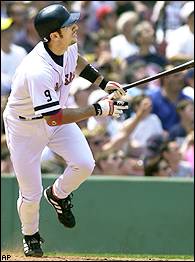 Garciaparra connected three times -- giving him a record-tying
five home runs in two games -- and had eight RBI to lead the Boston
Red Sox over the Tampa Bay Devil Rays 22-4 Tuesday in the opener of
a day-night doubleheader.

The Devil Rays salvaged the day by rallying for five runs in the
ninth inning and a 5-4 victory in the nightcap. Jared Sandberg hit a three-run
homer off Ugueth Urbina (0-6) to spoil a strong outing by Boston
starter Derek Lowe.

Victor Zambrano (4-4) got the victory. Esteban Yan finished for
his 13th save, giving up a two-out single to Garciaparra before
striking out Manny Ramirez with two on.

Ramirez, who homered twice in the first game, went 1-for-5 with
four strikeouts in Game 2 as the Red Sox wasted a great chance to
gain 1½ games on the first-place Yankees in the AL East.

But it was Garciaparra's performance in the opener that
highlighted the day.

``You don't see days like this coming,'' Garciaparra said after
the opener. ``You never say, 'I feel good. I'm going to hit
three.'''

Garciaparra, 29, became the first major leaguer to have a three
home-run game on his birthday, according to the Elias Sports
Bureau, baseball's statistician.

``On birthdays, I'm usually pretty low key,'' said Garciaparra,
who was 1-for-5 in the nightcap. ``It was just good timing.''

Garciaparra homered off Tanyon Sturtze (1-10) and Brandon Backe
in a 10-run third inning, then hit a grand slam in the fourth off
Backe. Garciaparra also homered twice Sunday at New York -- it was
26th time a player has hit five homers in two games.

Boston, 9-1 against Tampa Bay this season, hit seven homers in
the opener. It was the second three-homer game for Garciaparra, who
also did it against Seattle on May 10, 1999.

Tim Wakefield (4-3) allowed four runs and five hits in five
innings, and Willie Banks finished the six-hitter for his second
career save.

Boston trailed 4-0 after two innings in the opener before
scoring 10 in the third -- the 28th time the Red Sox reached double
digits in runs in an inning, the most in the major leagues.

Damon led off the third with a home run. Lou Merloni singled and
Garciaparra homered over the Green Monster, connecting on a 3-0
pitch.

Ramirez homered just inside the right-field foul pole, Trot
Nixon hit a two-run double for a 6-4 lead, Doug Mirabelli hit an
RBI double and Damon chased Sturtze with a run-scoring single that
made it 8-4.

Backe retired Merloni on a popup. Garciaparra followed with
another two-run homer over the Green Monster, hitting the first
pitch.

Garciaparra added his fourth career grand slam in the fourth,
hitting a 2-2 pitch over the Green Monster. It gave him 16 home
runs this season.

Garciaparra walked against Steve Kent in the sixth, on a 3-1
pitch as the crowd booed. He flied out on the first pitch he saw
from Travis Phelps in the eighth.

In the nightcap, Lowe continued his year-long dominance of Tampa
Bay, allowing five hits over seven shutout innings while walking
one and striking out five. Lowe has allowed just 13 hits in 31
innings against the Devil Rays this season, including a no-hitter
against them on April 27.

Sandberg said Tampa Bay got a big lift when Lowe came out of the
game.

``He's such a good pitcher and a dominant pitcher,'' Sandberg
said. ``Any boost you can get, you take.''

Urbina blew his third save in his last five appearances.

The Red Sox got runs in the first inning when Rickey Henderson
and Johnny Damon led off with hits and Ramirez drove them in with a
single.

Boston extended the lead to 4-0 lead in the fourth on an RBI
single by Nixon and a sacrifice fly by Rey Sanchez.

Nixon went 6-for-8 with a homer and three doubles in the
doubleheader.

Game notes
The nine home runs in consecutive games by Garciaparra and
Ramirez is a major league record. ... Boston RHP Dustin Hermanson
was unavailable to pitch after a tiny cut on his left elbow caused
his arm to swell up. Hermanson said he banged the elbow Thursday
after he slipped while washing dishes in his bare feet. He was
given antibiotics intravenously after the elbow swelled up on
Sunday, and was hospitalized for another IV on Tuesday. He came off
the disabled list Saturday after injuring his groin in his first
appearance for Boston in April. ... Garciaparra became the third
Red Sox player to homer twice in one inning, the first since Ellis
Burks against Cleveland on Aug. 27, 1990. Bill Regan also
accomplished the feat, against Chicago on June 16, 1928. ... Little
said reliever Alan Embree will come off the disabled list on
Monday. Embree suffered a left elbow inflammation.