MILWAUKEE (AP) -- Another no-decision for Kirk Rueter, another
big win for the San Francisco Giants. 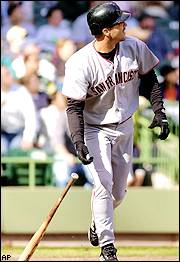 Jeff Kent and Benito Santiago hit solo home runs in the ninth
inning and the Giants kept pushing toward the NL wild-card slot,
beating the Milwaukee Brewers 3-1 on Sunday.

San Francisco began the day with a two-game lead over Los
Angeles, which played at San Diego, for the wild card.

The Giants swept the three-game series at Miller Park. They have
won five of six and 24 of 34.

Rueter limited Milwaukee to one run and three hits in seven
innings.

Rueter's record remained 13-8 -- but the Giants are 11-0 in games
in which he starts and gets no-decision.

Felix Rodriguez (8-6) got one out for the victory. Robb Nen
pitched the ninth for his 41st save in 49 chances.

"He just keeps us in games, big time, until something happens
dramatic, like it did in the top of the ninth,'' Giants manager
Dusty Baker said.

San Francisco now returns to Pacific Bell Park for five games,
beginning Tuesday against San Diego. If necessary, the Giants will
play a makeup game at Atlanta on Sept. 30.

Kent's 37th homer came with one out against Luis Vizcaino (5-2)
and broke a 1-all tie. After Barry Bonds grounded out, Santiago hit
a 420-foot drive to center field.

"They hit two homers off one of our best pitchers,'' said
Milwaukee manager Jerry Royster. "That's exactly how our season
has gone.''

Santiago's homer was the 200th of his 16-year major league
career.

The Giants needed those dramatics after Milwaukee starter Ben
Sheets dueled Rueter to a draw.

Sheets held the Giants to three hits and one run in eight
innings, walking two and striking out six. Rueter had three walks
and three strikeouts in his outing.

Sheets, who avoiding tying the club's NL record for losses with
17, again got poor run support. The Brewers have scored just 26
runs in his 16 losses, with three shutouts.

"I just go out and keep battling,'' Sheets said. "I'd like to
get runs and get wins, but I'm not going to point fingers. We go
down as a team. Hopefully, we'll win more games next year.''

Bonds doubled to lead off the Giants second, and scored on
consecutive groundouts by Santiago and J.T. Snow.

Milwaukee scored in the third when Sheets drew a walk and scored
on a double by Ryan Christenson.

The Brewers got a leadoff double in the eighth from pinch-hitter
Lenny Harris, but pinch-runner Eric Young was stranded at second
after two lineouts and a flyout.

In the series, Milwaukee scored three runs on 14 hits.

Game notes
The Brewers' exaggerated shift on Bonds paid off with a
4-5-3 double play in the fourth inning. With Rich Aurilia on first,
Bonds grounded sharply between first and second. Second baseman
Ronnie Belliard fielded and threw to third baseman Keith Ginter,
who had shifted into the shortstop position. Ginter threw to Richie
Sexson at first to complete the double play. ... Five of the nine
hitters in Milwaukee's lineup were batting under .200. ... Sexson
has been stuck at 99 RBI for 13 games.