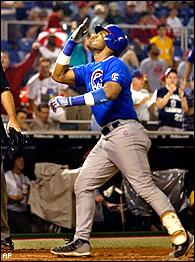 Sosa homered on the first pitch of the ninth inning and four
Chicago pitchers combined on a one-hitter as the Cubs snapped the
Philadelphia Phillies' seven-game winning streak with a 1-0 victory
Wednesday night.

"That's how the big sluggers do it," Cubs manager Dusty Baker
said. "He had a rough three at-bats and then wins the game. It was
huge."

Chicago is 6-11 in its last 17 games with seven of the losses
coming in the opposition's last at-bat. The Cubs last four losses
were by one run.

"This win was great for the ballclub," Sosa said. "We're
always positive but these last couple of games have been tough."

Baker added: "It doesn't get any better than that. It's great
for us to win a game like that. We were trying to forget about
those one-run losses and this goes a long way."

Sosa, who was 0-for-3 with three strikeouts going into the
ninth, hit a hanging slider from Turk Wendell (1-2) for his 510th
home run, 11th this season.

The homer was the first surrendered by Wendell in 29 innings
this season and snapped his 14-inning scoreless streak.

"It was a mediocre hit-me slider," Wendell said. "You can't
let a guy like that beat you. You can't let their best player, a
slugger-type, beat you."

Clement struck out five and walked a season-high six over seven
innings.

"It's the first time all year that I feel I'm getting to where
I want to be," said Clement, who is 7-2 lifetime against
Philadelphia. "I used a lot of sliders and stayed away from my
sinker because it just wasn't working."

Guthrie got two outs in the eighth inning, Farnsworth (3-0)
threw one pitch -- Bobby Abreu was caught stealing -- to end the
eighth. Borowski pitched the ninth for his 16th save.

Clement took a no-hitter into the fifth when Bell singled off
first baseman Eric Karros' glove and caromed into right field. The
official scorer took several minutes and looked at the replay on
the television before making the call for a single.

Both sides agreed with the scoring.

"It was a really tough play especially on the wet turf, it was
a hit," Clement said.

The Phillies managed to get the leadoff man on base in three of
the first five innings but each failed to reach second.

"Clement has nasty stuff and nothing is straight," Phillies
manager Larry Bowa said.

Clement's lone trouble came in the seventh when he issued
back-to-back walks to Pat Burrell and Marlon Byrd with one out.
Clement struck out pinch-hitter Tomas Perez and got Placido Polanco
to ground out to third.

The Cubs had their best chance for a run off Duckworth in the
sixth inning. Clement led off with a double and one out later Alex
Gonzalez drew a walk. Corey Patterson lined out sharply to center
field for the second out before Sosa, who worked a full count, got
caught looking on a nifty curveball.

In the seventh against reliever Carlos Silva, Jose Hernandez
singled with two outs and moved to third on Paul Bako's ground-rule
double. Silva then got Clement on a slow dribbler back to the
mound.

Philadelphia's loss saved Bowa from a new hairstyle. Before the
season, Bowa promised to let his players either shave his head or
dye his hair blond if the team won 10 in a row.

"We'll just have to start another streak tomorrow," Bowa
said.