NEW YORK -- Aaron Boone swung at the first pitch thrown to him in the 11th inning, 16 minutes past midnight Friday morning, and as soon as he hit the ball, his teammates launched themselves out of the Yankees' dugout, certain of where the ball would land -- the first moment in this game anybody had any right to be certain of anything.

Mariano Rivera raced to the mound and lay near the pitching rubber and thanked God, at the same spot where, three innings before, Boston manager Grady Little had asked Pedro Martinez if he could continue pitching.

That was when the Red Sox led, 5-3, when they were five outs from slaying the Yankees and moving on to the World Series, five outs from escaping 85 years of imprisonment in their own fated history. Five more outs, and the Red Sox could leave Babe Ruth and Bucky Dent and maybe even Bill Buckner behind them. But now the 2003 Red Sox are condemned to join those ghosts.

Little left Martinez in and the Yankees tied the game with three runs in the eighth, and in the 11th, Boone's long drive off Tim Wakefield landed in the left field stands to beat the Red Sox, 6-5, and decided the seven-game American League Championship Series.

The Yankees and Red Sox had played 19 times during the regular season, seven more times in the postseason, and they still needed extra innings to determine the league champion.

"This is the best," said Yankees manager Joe Torre. "To come here and play against the Red Sox, and play them 26 times and beat our rival like we did, it couldn't be more satisfying. This has to be the sweetest taste of all for me."

The Yankees of Torre, typically understated in their pennant celebrations, went crazy. Boone rounded third and threw himself into teammates waiting at home plate. First base coach Lee Mazzilli hoisted a moist-eyed Rivera from the mound, and Rivera -- who pitched three innings of relief, all scoreless, for the first time since 1996 -- was then lifted on the shoulders of teammates, the Most Valuable Player of the series.

Pedro Martinez, hooded in a gray sweatshirt, retreated to the Boston clubhouse, and after trying to relieve Little of some of the criticism that will follow him for the rest of his life, the Boston ace sat alone in front of his locker, the ends of his thin moustache mournfully aimed at the floor.

He had been so good, pitching in a hostile Yankee Stadium and under enormous pressure which had been building since Martinez instigated the nasty Game 3 incidents with a pitch behind the head of Karim Garcia.

Roger Clemens started for the Yankees, in the last season of his career, and gave up four runs in three-plus innings, and when he walked off in the midst of the fourth, the fans stood and cheered for Clemens, unsure of whether they would ever see him pitch again.

Mike Mussina would follow Clemens, and so would Felix Heredia, Jeff Nelson and David Wells, each trying to keep the Yankees in the game and give the offense a chance to come back against Martinez.

But Martinez was extraordinary, his velocity increasing from inning to inning, his fastball starting at 88 mph and eventually reaching 94 mph. Martinez had appeared to be struggling with his arm in recent weeks, but he changed speeds on the Yankees in Game 7, changed locations, moved the ball around.

Giambi, dropped to seventh in the lineup for this game, homered in the fifth, and again in the bottom of the seventh to cut the Boston lead to 4-2. Derek Jeter stepped in front of the Yankees' dugout and pumped his fist, as he has in so many Octobers.

Martinez then accelerated his fastball to 94 mph at the end of the seventh, finishing off Alfonso Soriano; and then teammate Nomar Garciaparra met Martinez with a hug. 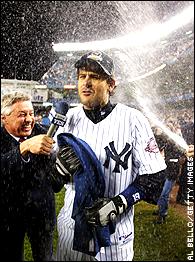 His pitch count was over 100, there had been some doubt about his physical condition, and with relievers Mike Timlin and Scott Williamson in line to throw the last two innings, it seemed the seventh might have been the last inning for Martinez.

But Little sent him back out for the bottom of the eighth, after David Ortiz homered to give Boston a 5-2 lead. Nick Johnson popped out to lead off the inning, and Boston was five outs from reaching the World Series -- just as the Cubs had been five outs away on Tuesday.

Derek Jeter smashed a line drive toward right field, where there is relatively little space and where hits rarely land behind the right fielder. But Jeter's liner eluded Trot Nixon, landing and then caroming against the fence -- for a double.

Bernie Williams lashed a single over shortstop, driving home Jeter, cutting Boston's lead to 5-3. It was the 115th pitch thrown by Martinez and Little emerged from the Red Sox dugout, the right-hander Timlin and the left-hander Alan Embree were warmed up and ready to come in.

Several of the Yankees said afterward that it appeared Martinez was becoming more vulnerable.

Hideki Matsui, the next hitter for the Yankees, had good swings against Martinez in this series, hitting a ground-rule double off the Red Sox ace in Game 3, smashing another double in the fourth inning of Game 7.

An easy decision for Little, it seemed.

Little went to the mound, spoke to Martinez and patted him with encouragement, but then turned and stepped back to the dugout, not knowing that he was about to join Bill Buckner in Red Sox lore.

"Pedro wanted to stay in there," Little said after the game. "He wanted to get the job done just as he has many times for us all season long and he's the man we all wanted on the mound.

"Pedro Martinez has been our man all year long and in situations like that, he's the one we want on the mound over anybody we can bring in out of that bullpen."

Martinez threw two quick strikes to Matsui, and then fired a fastball inside -- and Matsui turned on it, pulling the ball down the right field line, just fair; it skipped into the stands for a ground-rule double. Williams was at third, Matsui at second, the tying runs on base.

Timlin and Embree were ready, and Jorge Posada was coming to bat for the Yankees, still wearing a large chip on his shoulder from his screaming confrontations with Martinez in Game 3.

Martinez had thrown 118 pitches. Little remained in his dugout seat; he was sticking with Martinez.

"He had enough left in his tank to finish off Posada," said Little.

Torre sat impassively in the dugout. Jeff Nelson clasped his hands together. Jeter stood at the top step of the dugout, screaming encouragement at Posada when he swung through a curve to make the count 2 balls and 2 strikes.

Stay back, Jeter was screaming, gesturing with his hand, wait for your pitch, wait.

Martinez threw a fastball inside and Posada's bat seemed to crumble under its weight; he had not hit it very hard. But the ball rose over second base, shortstop Nomar Garciaparra and second baseman Todd Walker racing for it, reaching for it, in vain.

Williams scored, and Matsui sprinted around third and ran for home, and a handful of Yankees came out of the dugout to meet them at the plate. The score was tied. Little came out of the Boston dugout, to replace Martinez.

"He made some good pitches," said Little. "(Posada) squeezed his ball out over the infield and there's nothing we can do about it now."

The Yankees loaded the bases against Mike Timlin but could not score any more runs in the eighth, or the ninth, or the 10th. Rivera had taken over to pitch the ninth, blowing away the Red Sox hitters with his fastball, but then Torre had needed him in the 10th, and the top of the 11th -- the longest he had pitched in seven seasons.

We have to get this game, Rivera thought, and as he came off the mound after the 11th, he glanced over his shoulder, checking the scoreboard.

Wakefield, the Boston knuckleballer who beat the Yankees twice in this series, pitched the 10th, and came out to pitch the 11th, as well. Boone was to lead off in the 11th, for his first at-bat of the game. He had been benched at the outset of Game 7, when Enrique Wilson started because of his good career numbers against Martinez.

But Wilson also started, in part, because Boone had been terrible in this series -- terrible, really, since joining the Yankees. Wakefield just wanted to get ahead in the count, and Boone just didn't want to be overmatched. He felt uncomfortable against Wakefield in this series, felt like he really didn't have anything to hit.

Wakefield threw his first pitch of the 11th inning, and there it was, inside, below Boone's hands, about the only spot where he has been hitting pitches lately.

Boone saw the ball, hit it squarely, changing history for baseball's greatest rivals, and keeping it intact, as well.