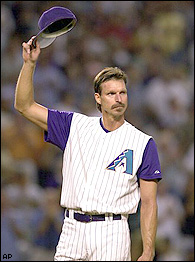 His intense single-mindedness paid off Wednesday night, when
Johnson fanned 11 and led the Arizona Diamondbacks past the
Colorado Rockies 3-2.

Johnson pitched eight strong innings and finished with 4,139
strikeouts, passing Carlton (4,136) for third overall on the career
list behind only Nolan Ryan (5,714) and Roger Clemens (4,287).

"I went about it pretty much the same way as I've gone about
every game that I've pitched this year," Johnson said. "You know,
strikeouts aren't easy. It's not something that you can go out and
do. If it was, a lot of people would be striking out a lot more
batters.

"Once again, it's a longevity thing, and I've been fortunate
and blessed that I've been healthy the majority of my career."

Manager Al Pedrique thought his ace was soft-peddling the feat.

"If we look back when he was with Seattle, (there were) a lot
of rumors that probably he wasn't going to pitch again because of
back problems," manager Al Pedrique said. "He's got to work real
hard to get back in the game and show people that he has a lot left
in him, and he's done it."

The Big Unit tied Carlton in the fifth when he struck out Brad
Hawpe, then got Vinny Castilla in the seventh for No. 4,137.

"I'm not the only one, that's for sure," Castilla joked. "How
many has he got? He's a great pitcher."

Play was interrupted momentarily while the scoreboard flashed
the statistics and the crowd cheered the workhorse of their
struggling team. Despite Johnson's big night, the paid attendance
was announced as 22,598 -- the second-lowest ever at Bank One
Ballpark.

"I knew before the game he was going to get it," said awed
catcher Chris Snyder, who was with Double-A El Paso until
mid-August. "I mean, just one of those feelings."

Johnson had his 12th double-digit strikeout game this year and
203rd overall -- moving within 12 of Ryan's big league record.
Johnson has a major league-best 268 strikeouts this season and
leads the majors with a 2.74 ERA and .190 batting average by
opponents.

Luis Terrero hit a leadoff homer and Shea Hillenbrand drove in a
run for the Diamondbacks, who won their second straight after
losing 10 of 11.

It was the first time in eight starts that the Diamondbacks
scored more than two runs for Johnson (14-13), and he needed them
after giving up a leadoff triple to Choo Freeman and a two-run
homer to Aaron Miles in the eighth inning.

"It didn't vibrate, and I figured he's providing most of the
power," Miles said. "You know, it was the right angle, and I
figured if any ball's going to make it out, it should be the one
from Randy Johnson that I don't feel."

Greg Aquino pitched the ninth for his 12th save in 13 chances.

"He's the closer and he comes in and gets the save," said
Johnson, unperturbed at being lifted with three outs to go.
"That's the way it's supposed to work. I've really enjoyed
watching him."

Johnson, a five-time Cy Young Award winner, struck out every
player in the Rockies' starting lineup except pitcher Shawn Estes.

Estes (14-7), who gave up three runs on nine hits and four walks
in seven innings, grounded out and had a single against Johnson.

The Rockies got their first hit in the fourth inning, a grounder
up the middle by Garrett Atkins, a rookie who made his first start
at first base in place of lefty Todd Helton.

Terrero hit an opposite-field shot into the swimming pool in
right-center on Estes' third pitch of the game -- the 13th leadoff
homer for Arizona and fifth this year.

The Diamondbacks made it 2-0 in the third when Estes gave up
two-out singles to Danny Bautista and Hillenbrand, then walked
Chris Snyder and Alex Cintron.

Hillenbrand added a sacrifice fly in the fifth.

Game notes
Inning-ending double plays by the Rockies in the fourth and
fifth helped them stay close. ... Johnson tied Estes for most wins
by an NL left-hander this season. ... Arizona RHP Andrew Good had
arthroscopic surgery to remove debris and scar tissue from his sore
pitching elbow before the game. The club said Good would begin
throwing in December but should be fine before spring training.