PHOENIX (AP) -- Rich Aurilia drew a crowd at his locker after the game, the type of crowd usually reserved for Barry Bonds. 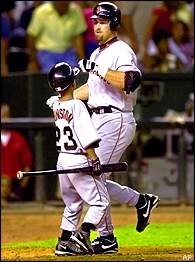 Aurilia lived the life of a slugger Saturday night, homering
twice and tying his career-high with five RBI as the Giants routed
the Arizona Diamondbacks for the third straight game, 11-4.

"I don't know where the home runs are coming from," Aurilia
said after hitting four in the past three games to reach 20 for the
third straight season -- a franchise record for a shortstop. Alvin
Dark is the only other Giants shortstop to hit 20 twice, getting 23
in 1953 and 20 in 1954.

"It's nice to get mentioned in the same sentence as the guys
you get mentioned with when it comes to something like that,"
Aurilia said. "I don't know where I'll end up, but it's nice to
hit 20 again."

Bonds went 2-for-3 with two walks and a triple after hitting three homers in the first two games of the series. He has matched Mark McGwire's record homer pace from 1998, hitting 45 in his team's first 105 games.

Aurilia hit a two-run shot in the fifth inning off Albie Lopez
(0-1), who was making his first National League start after being
acquired Wednesday from Tampa Bay. Aurilia keyed a six-run sixth
with a three-run blast off Greg Swindell.

It was the second straight night the Giants scored six times in
one inning.

"That's how it usually goes in baseball when a team scores more
runs in one inning than the other team does in the rest of the
game," manager Dusty Baker said. "One inning like that takes the
pressure off the pitcher and puts the pressure on them."

Marvin Benard had five hits and Armando Rios also homered for
the Giants, who won their fourth straight to remain 4½ games behind
Los Angeles in the NL West.

The Diamondbacks, who led the division for 62 days until their
9-5 loss to the Giants on Friday, dropped 1½ games behind the
Dodgers.

"This Giants club is swinging the bats the way we swung the bats last weekend," Arizona manager Bob Brenly said. "And we haven't made many good pitches on them, and when we have they've hit those anyway."

Lopez held Bonds without a homer by walking him two of the three
times he faced him. But Bonds tripled and scored on one of Andres
Galarraga's two RBIs. Lopez allowed seven runs and 10 hits in 5 1/3
innings.

"I was 1-0 and 2-0 behind a lot of hitters, and it showed,"
Lopez said. "When I got ahead in the count I got ground balls, but
it was just one of those nights. I couldn't get the first-pitch strike."

Russ Ortiz (12-6) won for the fourth time in his last five
starts, baffling everyone in Arizona's lineup except David
Dellucci.

Dellucci drove in four runs with a single and three-run homer,
tying his career-high. Ortiz gave up four runs and eight hits in
six innings.

Aurilia's first homer sent San Francisco to a 4-1 lead in the
fifth. In the sixth, Ramon Martinez and Marvin Benard both had RBI
before Aurilia homered into the swimming pool in right center.

Galarraga added a run-scoring double before Bret Prinz, the
second Arizona reliever, got the third out.

"Since Galarraga got here, it seems like it's been contagious," Rios said. "Everybody is swinging the bats, and we're doing what I call a Giant thing, which is get hot at one point and then keep rolling the rest of the year."

Game notes
The Giants have hit 11 homers in first three games of the
series and lead the majors with 39 in July. The Dodgers are next
with 37. ... Starting with a walk in his last at-bat Thursday,
Bonds reached base nine consecutive times -- four hits and five
walks -- until Swindell struck him out in the sixth inning. ...
Aurilia has three career multihomer games. ... The first 15,000
fans got a Luis Gonzalez bobblehead doll, and the gimmick helped
attract a season-high crowd of 47,570 to Bank One Ballpark. ... Lopez is the third Diamondbacks pitcher who attended high school in the Phoenix area, joining Curt Schilling and Prinz. ... Giants 2B Jeff Kent strained his right hamstring tagging out Craig Counsell in the fifth and left the game.