And the drumbeat of pressure began sounding for the Yankees, officially, at 7:24 a.m. Eastern time. That's the moment that Tampa Bay first baseman Tino Martinez blasted a long home run off reliever Felix Heredia in the Tokyo Dome to all but finish off his ex-team, and it was probably the instant when, somewhere, Yankees owner George Steinbrenner flung his television remote control.

The Devil Rays thumped the Yankees, 8-3, in the Major League Baseball season-opener that almost nobody in the U.S. saw, a single-game result that is virtually meaningless, considering that 161 games remain. But for the Team That Isn't Supposed To Ever Lose, of course, any defeat will weigh just a little bit more. 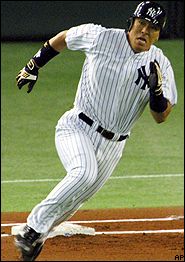 Steinbrenner has loaded his team with staggering talent, adding the game's best player, Alex Rodriguez, and perhaps the best right-handed hitter, in Gary Sheffield, to a team already graced by Mariano Rivera, Derek Jeter, Jorge Posada and Jason Giambi. They will win many, many games, sometimes posting weeks when they will pile up runs by the dozens. Half the teams in the American League would lose a majority of games against a Yankees' 'B' team.

But the Yankees' most daunting opponent this year won't be the Tampa Bay Devil Rays, of course, or the AL West teams or the Toronto Blue Jays, and perhaps not even the Boston Red Sox. What the Yankees will have to overcome is the enormous burden that comes with the daily expectation of success -- and they must do so without drawing much short-term satisfaction.

Their reality is that no matter how many games they win in the regular season, and no matter how well they fare in the playoffs, none of it will be validated without victory in the last game in October. The Red Sox will play under similar pressure this year; no other teams will.

Success was a new concept for the Yankees' players in Joe Torre's first year as manager in 1996, but since they beat Atlanta in the World Series that fall, a presumption of success has hovered over them. For years, the core of the Yankees, from Martinez to Paul O'Neill to Tim Raines to Joe Girardi to David Cone, protected one another, supported one another, and together they coped and thrived under that pressure, winning four titles in five years from '96-2000.

Maybe the Yankees of 2004 will develop that kind of infrastructure, but they will have to do it quickly. Sheffield, Kenny Lofton, Rodriguez, Javier Vazquez and Kevin Brown are all in their first season with the team. Giambi has his own personal battle to wage this year, as he fights the steroid perception (and he got off to a great start, smashing an opposite-field home run and a double).

Almost every new Yankees star has faced a period of adjustment when going to New York, from Chuck Knoblauch (who was eventually wrecked by the pressure) to Roger Clemens to Giambi to Hideki Matsui. Now the Yankees' roster is filled with newcomers, playing the same game but not in the same context.

Maybe they have enough All-Star talent to meet the expectations. Rodriguez looks like he's going to be an exceptional third baseman, Matsui could have a big year, and the middle relief has been upgraded immensely, with the addition of Paul Quantrill and Tom Gordon.

But there are cracks in this $182.3 million dreadnought. Giambi will be expected to play many games at first base, where he is a liability. Fly balls once caught by Bernie Williams and O'Neill have parachuted in front of Sheffield and Lofton in the Tokyo Dome. (In fairness to Sheffield and Lofton, the hits that fell in were during exhibition games, for which Yankees manager Joe Torre encourages his players to not take physical risks, but this is likely to be a recurring problem.)

The Yankees' starting rotation is aged; they're going to throw out their share of clunkers, as Mike Mussina did in the season-opener, allowing five runs in five-plus innings, including four straight extra-base hits in the sixth.

And the Yankees will have to play young and hungry and aggressive teams from Tampa Bay and Toronto that will occasionally make them look very slow. Aubrey Huff, Rocco Baldelli and the other Rays attacked with big swings on Opening Day; there is no pressure on them, just as their was virtually no pressure on the Florida Marlins going into the World Series last year. The Devil Rays play the games, they swing the bats, they run, they have fun.

If the Yankees lose -- well, that's another story, that's another headline, that's another reason for Steinbrenner to rant and question and doubt. Other teams can set their goals day by day. But for the Yankees, the only game that really matters won't be played for seven months, and that is a hard finish line to reach.