Bob Gibson once said, "A great catch is like watching the pretty girls go by -- the last one you see is always the prettiest."

Disagree with the list? Got a nomination? Something we missed? Send it in!

True enough. But ranking the best defensive plays of all time is an even dreamier affair. It's always easy to rattle off fantastic catches by outfielders -- Willie Mays in the '54 Series, Torii Hunter in the 2002 All-Star Game -- but how about the other positions? What were the best-ever plays among second basemen? How about pitchers? No love for their glove, at least by comparison.

So for the next four days, ESPN.com will present the three best plays in baseball history at each position on the diamond. (And just for fun, the single worst play, too.) The criteria are personal but plausible: Plays are rated by sheer difficulty as well as the pressure under which they were made, with some consideration for any folklore the play has inspired since. While we can never know about some great plays that were made before videotape, we tried not to be biased toward old-time players.

It wasn't easy. We aren't ranking the best defensive players, but the best specific plays, or defensive performances. And unearthing great plays by first basemen and catchers, for example, was much tougher than it sounds. To make sure I didn't miss anyone, I consulted with several prominent baseball historians, including John Thorn. Many thanks to members of the Society of American Baseball Research for their input as well.

Today's installment will present the corner infielders. Tuesday's will feature second basemen and shortstops, followed by pitchers and catchers, and then outfielders, whose great plays have become most memorable. Without further ado, let's begin:

Hooks Wiltse had once been the New York Giants' left-handed counterpart to Christy Mathewson, twice winning 20 games and once striking out four batters in an inning. But he loved to field as well. In Game 2 of the 1913 World Series, against the Philadelphia Athletics, he was pressed into service at first base in the bottom of the third after Fred Snodgrass was injured running the bases.

The game developed into a scoreless pitchers' duel between Mathewson and A's ace Eddie Plank. But in the bottom of the ninth inning, Wiltse's glove truly saved the game.
The A's put runners on second and third with none out, when Philadelphia's Jack Lapp smacked a hard grounder to Wiltse. The pitcher-turned-first baseman made what was called a "beautiful stop" to grab the ball and immediately fired home to nail the runner and keep the tie alive.

Then Wiltse did it again. On the next batter, Wiltse stopped a hot grounder and threw to the plate and get the second out. Two ground balls, two runners nailed at home. (Talk about good control.)

When the following batter was retired, the Giants were still alive. They immediately took advantage -- in the top of the next inning, and thanks in part to a nifty sacrifice bunt by Wiltse, the Giants scored three runs to win the game, 3-0.

The Philadelphia Phillies had never won a World Series, and the fans in Veterans Stadium knew it. Now they were two outs away. Game 6, ninth inning, one out, holding a 4-1 lead over the Royals. Then in true Philadelphia fashion, it all started falling apart.

Willie Aikens walked. John Wathan singled. Jose Cardenal singled. Suddenly, the Royals had the winning run at the plate in the form of Frank White. With 65,838 fans holding their collective breath, Tug McGraw induced White into a foul pop-up near the first-base dugout.

First baseman Pete Rose actually blew the play initially. He didn't call off catcher Bob Boone, who had to assume that Rose had lost the ball somewhere. Here's how Boone described matters years later: "I'm running with all this gear on and I'm thinking, 'Where the hell is Pete?' As a catcher with my back to the plate I'm catching the ball at a different angle, over my shoulder, like a wide receiver -- that's why it's supposed to be the first baseman's ball."

As the ball came down, Boone stuck his glove out, and it popped right out of the puffy leather. White had new life -- for a split second.

Rose, lurking nearby, watched the ball bounce out of Boone's mitt and immediately stuck out his own, plucking the ball out of midair. Instead of White batting again with the bases loaded and one out, the struggling Willie Wilson batted with two. McGraw struck out Wilson to end the Series, as well as decades of disaster for Philadelphia.

Rose's play went down as one of the headiest in modern Series history. "Yeah," Boone laughed. "But I still wanted to kill him."

On June 1, 1927, the Tigers were clinging to a 1-0 lead over the Indians when Cleveland came up in the top of the ninth. Glenn Myatt walked. Charlie Jamieson bunted and beat it out, leaving runners on first and second. Homer Summa then came to the plate, and smashed a line drive toward first base.

It immediately looked as if the hit would score a run to tie the game 1-1, and set the Indians up for more. But Johnny Neun, Detroit's backup first baseman, snared the ball for the first out and tagged Jamieson off first base for the second out. Then the footrace began.

Myatt had wandered so far off second base, Neun ran to that bag (rather than throw the ball) to try to retire him. When Neun got there first, he had completed just the second unassisted triple play by a first baseman in big league history -- and the Tigers walked off the field, instant 1-0 winners.

If you haven't seen this one, peer deep into the eyes of any Red Sox fan, past the iris and the retina, and you'll see the video burned straight onto his or her soul.

This wasn't just one play. In the 1970 World Series, Brooks Robinson made so many outstanding snare-and-throws, so many clutch maneuvers few had seen before, his performance became a week-long clinic on how to play third better than perhaps anyone in the history of the game.

With the score tied in the sixth inning of Game 1, Lee May led off with a one-hop shot down the line that hooked into foul territory after it passed the bag. Robinson lunged over the line to backhand the ball and in one smooth motion turned 180 degrees and heaved the ball toward first. (Robinson later called it "more like a turnaround jump shot.") The dead-on, one-hop throw nailed May at first. In the next inning, Robinson's home run gave the Orioles a 4-3 win.

In Game 2, Robinson backhanded another May grounder to start a double play. That set up several more outstanding stops in Game 3. With two on and none out in the first, he jumped to grab a high Tony Perez bouncer, tagged third base and fired to first for another double play. In the second, he charged for a squibber and nailed Tommy Helms at first. Four innings later Robinson laid out to snare a Johnny Bench line drive.

Then, in the ninth inning of Game 5, Robinson stole another hit from Bench when he lunged for a ball that was hit so close to the line, after catching it he landed in foul territory.
Fittingly, when Pat Corrales grounded to Robinson two batters later, the Series was over, the Orioles winning in five. Robinson hit .429 with two homers, but that isn't why he was named MVP. 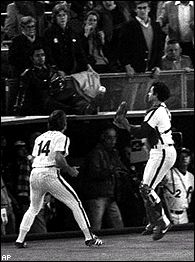 Like Robinson, it wasn't just one play that made Graig Nettles a legend. Several in Game 3 of the 1978 World Series became indelible images of third-base mastery.

In starting lights-out lefty Ron Guidry, who had gone 25-3 that season, the Yankees didn't think they would need much defensive help. But thanks to seven Guidry walks, the Dodgers were constantly threatening -- not just to score, but to take a 3-0 lead in the Series. Then Nettles came to the rescue.

In the third inning, with Los Angeles down 2-1 and rallying, Nettles made a great backhanded stop on Reggie Smith's grounder and threw to first for the third out.

In the fifth, with two outs and the bases loaded, Steve Garvey hit a high bouncer to Nettles, who corralled it, spun and threw to Brian Doyle at second, ending another inning.

Then, in the sixth, with the bases loaded and two outs again, Davey Lopes smashed a ball down the third-base line. Nettles flashed to his right to snare it, scrambled to his feet and threw to Doyle again for the third out.

All three plays preserved the Yankees' tenuous 2-1 lead, and they wound up winning, 5-1. The victory completely changed the momentum of that World Series -- the Yankees took the next three games to win their second straight championship. 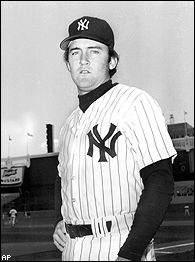 The Robinson and Nettles plays were probably better, but no third baseman's defense made more national news than Ken Keltner's on July 17, 1941.

The Yankees' Joe DiMaggio had hit in 56 straight games, already 12 more than the previous record. The press and public wondered if Joe D. would ever go hitless again. The more than 67,000 fans who packed Cleveland's Municipal Stadium that day figured that if anyone would stop him, it was pitcher Al Smith. As it turned out, a third baseman did.

Keltner, a fine all-around player for years, etched his name into history that afternoon. In the first inning, DiMaggio hit a shot down the line. Keltner, playing deep, zipped over to grab it, his momentum carrying him into foul territory. But he got off a strong throw and nipped DiMaggio at first.

DiMaggio walked in the fourth. In the seventh, he hit another ball down the line that looked like it would pass Keltner. But the Indians' third baseman executed almost the exact same play.

When DiMaggio was retired in the eighth, his streak came to an end. But Keltner's legend was cast forever.

HONORABLE MENTION: Ken Caminiti fielding a grounder down the line and doing a virtual somersault before falling over and firing the ball over to first for the out, circa 1999.

WORST PLAY: Yes, Bob Brenly once made four errors in one inning, but at least he later hit a home run to win the game. Tommy Glaviano, on May 18, 1950, had perhaps the worst day ever at the hot corner. In the ninth inning, with his Cardinals holding an 8-5 lead, Glaviano made three errors on three consecutive plays. His two wild throws and one booted grounder let in four runs to cost the Cardinals the game, 9-8.

Alan Schwarz is the Senior Writer of Baseball America and a regular contributor to ESPN.com. His first book, "The Numbers Game: Baseball's Lifelong Fascination With Statistics," will be published by St. Martin's Press in July.