FORT MYERS, Fla. -- As we wriggled in between 15 camera crews to listen to Pedro Martinez and Nomar Garciaparra deliver their renditions of the State of the Red Sox address Tuesday, it finally hit us why this is now, officially, The Most Entertaining Spring Training of All Time.

It's because for the Red Sox and their good pals, the Yankees, last fall's playoff series never ended.

Sure, the games stopped. But the plot lines never did. Not all winter. Not, apparently, all spring.

It is more than four months since Grady Little walked to the mound to visit Pedro as the drama and passion of an epic Game 7 throbbed around them. But somehow we remain as transfixed today by what happened on that mound as we were then.

So there was Pedro on Tuesday, sitting on a picnic bench in Fort Myers, still trying to explain what he said, what he thought, what he felt.

It is nearly two months, meanwhile, since Garciaparra plopped in front of his TV, waiting for a phone call from his bosses as he tried to digest the news that Alex Rodriguez was all but headed for the Red Sox, and he was headed to the South Side of Chicago. We can still recall thinking of George Steinbrenner, watching those same telecasts back then, and no doubt uttering words you'll never hear on the Rugrats.

Yet all their worlds, amazingly, wound up spinning in exactly opposite directions. So there was Nomar on Tuesday, still trying to comprehend that it was his first day of spring training, and A-Rod was up the road in Tampa, and Steinbrenner was cackling at the poor Red Sox, and somehow he was here.

"A couple of times there (this winter), I didn't know if I was supposed to be renting a place in Tucson or down in Vero Beach or wherever," Garciaparra joked. "I'm just glad I still had my connections in Fort Myers to get a place here."

Well, he's here, all right. They're both here. And the reverberations from their recent past remain as riveting as their hazy futures.

Each has one year left on contracts they seemed to sign back in some other lifetime. It once was hard to imagine the Red Sox without either of them, let alone both of them. But now that could happen. Easily.

So there was Pedro on Tuesday, saying: "If they don't want to sign me, that's fine. I'm pretty sure I'll find a job with somebody else."

And there was Nomar not even an hour later, talking about the prospect of not finishing his career in Boston, saying: "I'd definitely be hurt. I'd definitely be disappointed. ... But basically, I've dealt with that already. As far as I'm concerned, it was a done deal. I was shipped off to another team. So I don't know what the future holds."

The state of Garciaparra's psyche has been a topic dancing all over the New England winter. It will be just as hot a topic all spring, all summer, all fall. No one doubts how hard he will play. But will he feel the same allegiance to a franchise that he clearly believes showed no allegiance to him last winter?

"I probably feel how anyone would feel after playing his whole career in one organization and having to find out he was traded, or pretty much gone, over the television," Garciaparra said, bluntly. "How would you feel?"

Asked how he reacted when he heard statements from the Red Sox that signing him to an extension was still their first priority, Garciaparra couldn't have acted more skeptical if he'd burst into uproarious laughter.

"Everyone saw their actions (this winter)," he said, "pretty much on a daily basis. It was everywhere. You guys can answer that for yourself."

Nevertheless, if you have watched this man play baseball, there is no reason -- none -- to believe that when he puts on a uniform, he will no longer feel the same loyalty to play for this team with the fury he has always played with.

"That won't be hard at all," Garciaparra said. "That uniform represents so much more. It represents myself and my teammates and all of the other great ones who have worn it before. And that's a tremendous honor."

But having his life turned into one giant trade rumor -- uh, not such an honor. So who knows what baggage he and his fellow near-exile Manny Ramirez brought to this camp beside their suitcases and their equipment bags? And who knows how that baggage will play out on a team that majored in chemistry last summer?

"I know there's been a lot of talk regarding Nomar and Manny," Martinez said. "But Manny's in La La Land. I haven't talked to Manny in a month, month and a half. So I don't expect Manny to talk. Manny never talks. He doesn't even know where he's standing. But one thing he does know is how to hit, and how to play the game.

"And Nomar is very professional. He understands the business part of it. I'd be upset as well if I wasn't told that I was going to be in trade talks, because a player like Nomar deserves to know he's at least going to be talked about. But Nomar is not a person who's going to snap because of that."

Well, Garciaparra didn't snap Tuesday. We can report that, at least. And good old Manny apparently hadn't caught a flight out of La La Land, because he was the only Red Sox regular who didn't make an appearance, one day before the first full-squad workout. 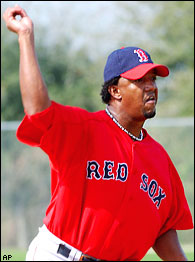 One guy who did make an appearance was first baseman Kevin Millar, the man who once said, right there on SportsCenter, that he'd rather play with A-Rod than Nomar. But if you were wondering what the after-effects of that pithy little remark would be, now you know:

One New York strip to be named later. And not much later, either.

OK, no we weren't. But then again, neither was Steinbrenner, Little, A-Rod, Magglio Ordonez, Don Zimmer, Jorge Posada, Roger Clemens, Andy Pettitte, Hideki Matsui or Tim McCarver. For some reason.

Yet they all seem to hover over the events of this spring, whether they're in the neighborhood or not.

There was Pedro on Tuesday, still talking about Zimmer, saying: "I don't need to call him, and he doesn't need to call me. I was trying to protect the guy. I was totally aware I didn't want to hurt him. ... But I had to let him go because he tried to hurt me. I don't feel I did anything wrong."

And there was Garciaparra, still talking about A-Rod -- in particular the theory that the failure of the Red Sox to deal for him actually enhances Garciaparra's bargaining power:

"It wasn't about him enhancing my position," he said. "I've done all I can to enhance my position."

And there was Pedro, talking about McCarver's misinterpretion of what he was mouthing to Posada last October when he pointed at his head before Wrestlemania busted loose in Fenway.

Oh, he'll remember, all right. And we'll remember. Everything. All of it. Yankees and Red Sox. Red Sox and Yankees.

Even as they assemble for this season, we are still trying to figure out what happened last season. Even as Terry Francona sits in the manager's office in February, we are still sorting out what was going on in the former manager's head when he marched out to speak with Pedro last October.

Asked whether he'd insisted to Little that he should stay in to pitch after allowing a pair of one-out hits in the eighth inning of Game 7, Martinez replied: "He just asked a question, whether I wanted to pitch to Matsui or not. I thought that would be my last batter."

Martinez revealed Tuesday that "I was actually shocked to pitch to those last two hitters." Yet he also admitted he "was a little bit scared to leave that game. But it really wasn't my decision."

Nope. Sure wasn't. It was Grady Little's decision. And while Martinez was still trying Tuesday to get Little a pardon from the governor for that decision ("We lost, and I'll face full responsibility"), it was sure as heck too late for that now.

How many lives have been changed by that decision? How has the outcome of that game and that series hovered over everything that has happened since?

Would A-Rod be a Yankee? Would Curt Schilling be in Boston? Would Terry Francona be managing in Boston -- or anywhere? Would Nomar and Pedro still be dissecting events that happened before most Americans had ever heard of John Edwards?

But most of all, would we be hanging on every twist in this particular spring-training road with this much anticipation? Would we be reading every darned word out of Tampa and Fort Myers this spring with more interest than we read our own bank statements?

Would this still be The Most Entertaining Spring Training of All Time? Heck, no. Our hearts are still thumping from last season -- and next thing we knew, it was this season. Does it get any better than that?