PEORIA, Ariz. -- Not many people have less incentive to be on the job than an Arizona Diamondbacks outfielder when Brandon Webb is pitching. But here are three who spring to mind:

• A surfing instructor in Siberia. 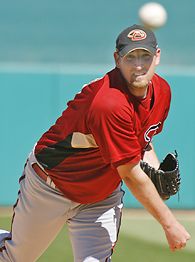 How boring does it get in the pasture when Webb's sinker is cooking? When Arizona outfielder Eric Byrnes stands out there watching scores of hitters fail to lift the pitch, he has to fight the temptation to daydream about non-baseball-related topics -- like global warming, or his favorite hair care products.

Only the occasional ground single up the middle breaks the monotony.

"There are times when you want to pull up a lawn chair, order up a drink from the bar and check out all the chicks at the pool,'' Byrnes said. "You feel like you can do that. But there always seems to be about one [fly ball] a game.''

Or at least, one a fortnight. Last spring Byrnes grew so accustomed to standing idle during Webb's Cactus League outings, he "panicked'' when the Rangers' Phil Nevin laid into a pitch and drove a fly ball to deep center field. Properly chastened, Byrnes vowed never to be caught off-guard again.

Webb's pitching repertoire is down to earth, so it's only fitting that his personality is, too. As any diehard Diamondbacks fan can attest, Webb is partial to jeans and T-shirts, breakfast at IHOP and playing his guitar in the clubhouse to unwind before games. He's just an unpretentious country boy with no clue that he's entitled to a major case of big league head.

After going 16-8 with a 3.10 ERA for the Diamondbacks last season, Webb loaded up a camper with his wife, Alicia, their infant daughter, Reagan, and the family's four dogs -- two miniature dachshunds, a black lab and an English mastiff -- and drove from Arizona to his home in Ashland, Ky.

Four months later Webb traveled to New York to receive the National League Cy Young Award at a baseball writers dinner, but it was just a brief interruption from his favorite offseason pastimes -- hunting white-tail deer, playing in charity golf tournaments and celebrating the holidays with friends and relatives.

Webb insists on returning to the Bluegrass State each winter to be close to his family, even though he knows he's meteorogically out of kilter.

Webb's pitching arsenal is as no-frills as his demeanor. Last September he threw a complete-game one-hitter to beat St. Louis 3-0, and he said the postgame charts revealed that 90 of his 96 pitches were sinking, two-seam fastballs.

It's the ultimate compliment: Hitters know what's in store and adjust their approaches in the name of groundball avoidance, but it makes zero difference. Last year Webb allowed a mere 115 fly balls in the 3,337 pitches he threw. With a 4.06 groundball to fly ball ratio, he beat out the Dodgers' Derek Lowe for the honor of baseball's resident Sinkmaster General.

There hasn't been a pitcher less reliant on outfielders since Eddie Feigner of the "King and his Court'' was in his heyday.

So what makes Webb's sinker so hellacious?

"Imagine somebody standing about 15 feet away from you and throwing a brick at you and trying to catch it,'' said Arizona catcher Chris Snyder. "It just disappears.''

"It's not like it's 87 miles an hour, either,'' said San Diego center fielder Mike Cameron. "It's got a little hair on it.''

"When his sinker is on, it looks like a major league pitcher throwing to little leaguers,'' Byrnes said. "It's like those wiffle ball games you used to play in your backyard, when your buddy knew how to throw the special pitch that nobody else had.''

Arizona pitching coach Bryan Price typically discourages his starters from relying so heavily on a single pitch, because if they need to haul out their secondary stuff in the late innings, it might be too late to develop the requisite feel. But Webb is a special case because his sinkers are so difficult for hitters to track. Some plummet straight to earth, while others bore in on a right-handed hitter or away from a lefty.

"When [Brandon Webb's] sinker is on, it looks like a major league pitcher throwing to little leaguers. It's like those wiffle ball games you used to play in your backyard, when your buddy knew how to throw the special pitch that nobody else had."
-- Diamondbacks OF Eric Byrnes

The better Webb's sinker gets, the more economically he works. In 2004 he threw an average of 16.5 pitches an inning; last year it was down to 14.2. Among major league starters, only Greg Maddux, Chien-Ming Wang and Roy Halladay were more efficient.

"Ever since we got into baseball, we've all heard about trying to keep the defense interested by working fast, putting the ball in play and having action early in the count,'' Price said. "Brandon lives by that philosophy.''

Webb, an eighth-round draft pick out of the University of Kentucky in 2000, can pinpoint exactly when the first day of the rest of his baseball life occurred. He was warming up in the bullpen for Class A South Bend when pitching coach Royal Clayton, Royce's brother, made some mental notes on his stuff and told him they should do some tinkering the following spring.

Here's what they discovered: Webb had been throwing across his body too much as a straight fastball-curveball pitcher. By opening up and clearing his hips, he was better able to repeat his delivery and get on top of the ball. In his words, the new approach "just let the ball do its natural thing.''

Former Cy Young Award winner Mark Davis, then a pitching coach in the Diamondbacks' system, provided encouragement when too many of those groundballs found holes in the minors. Webb earned a big league callup in 2003 and finished second to Dontrelle Willis in the NL Rookie of the Year race, and the Diamondbacks proceeded to ride him almost as hard as he rides his sinker.

This year, for the first time in a while, Webb has the luxury to exhale. The Diamondbacks traded for Livan Hernandez in August, acquired Doug Davis from Milwaukee in November, and picked up Randy Johnson from the Yankees in January.

Sure, Hernandez has looked terrible in spring training, Davis ranked second in the National League in walks for two straight years, and Johnson is 43 and coming off back surgery. But all four Arizona starters pitched on Opening Day for their teams last season, and they combined for 829 innings pitched.

While Webb remains the designated ace of the staff, history shows that he's mentally tough enough to handle the burden. Last August his close friend and former University of Kentucky teammate, Jon Hooker, died in a plane crash. The following day, a somber Webb went 7 1/3 innings to beat the Padres and dedicated the victory to his buddy "Hook.''

"It's tough, but you try to deal with it the best way you can,'' Webb said.

Spoken like an athlete who's determined, focused and driven to get the job done. And did we mention grounded?