SURPRISE, Ariz. -- Texas Rangers reliever C.J. Wilson is working on a novel and a gyroball this spring -- not necessarily in that order.

His novel, "Instructions for My Next Life,'' is written from the vantage point of a deceased minor league ballplayer whose personal journal is discovered by his family. Like Wilson, the book's protagonist is a Tommy John surgery guy. But any other similarities are purely coincidental.

Wilson describes the book, which is still a work in progress, as a "fictional memoir'' more akin to something from the Mitch Albom catalogue than, say, "Three Nights in August.'' Baseball is merely a backdrop for more  well  cosmic concerns. 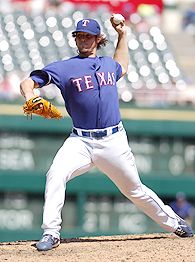 The gyroball is a toy that Wilson tinkers with during free moments in camp. He wants to master the pitch in hopes that it can complement his live fastball, hard sinker, slider and changeup. Wilson also plans to go to school picking Texas closer Eric Gagne's brain this season, and embrace the role of closer when the opportunity presents itself.

Maybe then Wilson can achieve his most ambitious goal of all -- marrying actress Charlize Theron. So what if she already has a husband? If a man sets his mind to something, there's no limit to what he can accomplish.

"I can cook. I can clean. I'm a baseball player,'' Wilson says, "and if I have some deficiency, I'll work on it. As a pitcher, if you couldn't throw a slider, you'd work on it. It's the same thing personally as athletically. That's what baseball has taught me.''

Left-of-center mind-set
Spend a week roaming the Cactus League, and you never know what kind of inspirational, offbeat story you might find. Former Marine Cooper Brannan, who lost a finger to an explosion in Iraq, is pitching in the San Diego system. Pitcher Juan Sandoval is back in Seattle's camp after losing an eye to a shotgun blast, and 40-year-old reliever David Veres is attempting a comeback with the Rockies after hip replacement surgery.

Then there's C.J. Wilson, who's battling a different affliction: He's an intellectual.

And a left-hander, to boot.

Wry and cerebral social observers haven't always meshed with the baseball establishment through the years. Think of Bill Lee finding new and innovative ways to irritate Don Zimmer in Boston, or Jim Bouton arousing suspicion in the Seattle Pilots clubhouse as he toted around a notebook jotting down observations for "Ball Four.''

Before the Giants gave Barry Zito a seven-year, $126 million contract, agent Scott Boras stressed that Zito was ready to downplay his extracurricular activities and devote himself to being a great pitcher. Never mind that Zito credits his love of music and photography for keeping him mentally fresh off the field and making him a better ballplayer.

Wilson, like Zito, has a touch of Southern California surfer dude in him, which leads to the other inevitable comparisons. He brings to mind Nuke LaLoosh with a 150 IQ, "Spaceman'' Lee without the self-promotion, and Sidd Finch with slightly less velocity.

During a recent 45-minute conversation at his locker, Wilson shared an encyclopedic knowledge of movies as well as insights into the philosophies that make him tick. He believes in Taoism, a Chinese faith that teaches its followers to become attuned to the flow of change. "Have you seen 'Star Wars'?'' he says. "The Jedis were Taoists.'' Wilson also adheres to the precepts of Straight Edge, an offshoot of the punk movement that discourages drug and alcohol use. He claims he has never had a beer.

Creativity is a family heirloom. Wilson's parents are both photographers, and his late grandfather was a mathematician. After two years of junior college, he entered the screenwriting program at Loyola Marymount University, where he submitted several heist and revenge type plots. Think less Quentin Tarantino's "Reservoir Dogs'' than French director Luc Besson's "The Professional.''

Wilson found an early mentor in former big leaguer Bud Black, whom he met through a family connection. One day during a visit, Black suggested they turn off the NFL game on television and have a catch in the yard.

"You could tell in about three throws that he had a good, live arm,'' says Black, now San Diego's manager. The Rangers recognized that potential when they signed Wilson as a fifth-round pick in 2001.

For years, Wilson discovered that fitting into the clubhouse dynamic was a challenge. At one point he was so withdrawn he would sit at his locker with headphones and shut himself off from his teammates. So he took a job at Nordstrom's department store, selling clothes to strangers and essentially willing himself not to be shy anymore.

Every year, he makes it a point to add a new skill to his repertoire. There was the cooking binge. And now he's learning to play the guitar, under the theory that it will make him a more rounded person and a better baseball player.

"If you pick up a guitar for the first time, it's a completely foreign instrument,'' Wilson says. "You have six strings and 23 frets, and there are a jillion different combinations of hand positions. You have no idea what's going on.

"If you can learn a couple of songs, it unlocks so many different things in your mind when you're on the mound. I'm always experimenting. It's a principle I live by.''

To truly know the sword, Musashi wrote in "The Book of Five Rings,'' you must also know the brush.

Baseball traditionalist
Of course, this stuff wouldn't have gone over with old-school "ball guys'' like Leo Durocher, but Wilson's coaches abide his quirks because he works so hard and is so devoted to his craft. He's familiar with the pitching theories of Tom House and Mike Marshall, and he's a student of baseball history. As a kid in Southern California, Wilson grew up collecting baseball cards and memorizing the arcane statistics and factoids on the back. In this respect, he had more in common with the dorks who would grow up to be sportswriters than the cool jocks at school.

Former Rangers pitching coach Orel Hershiser, now an analyst with ESPN, enjoyed the give-and-take with Wilson during their time together in Texas.

"He asked a lot of good questions,'' Hershiser says. "He's not the kind of guy you could say, 'Go do this,' and he automatically wants to go run through a wall. He wants good reasons behind it. It's part of his nature. He's not just questioning you out of orneriness. He questions you because that's the way his mind works.''

That innate curiosity extends to all facets of the game. Thad Levine, Texas' assistant general manager, can recall Wilson walking into his office one day and questioning him on how pre-arbitration salaries are determined.

"If you can learn a couple of songs [playing a guitar], it unlocks so many different things in your mind when you're on the mound. I'm always experimenting. It's a principle I live by."
-- C.J. Wilson

"He's a very dynamic individual,'' Levine says. "Once his career in baseball is over, his life will have just begun.''

These days, Wilson has no trouble fitting into the clubhouse culture. He's found a kindred spirit in teammate and roommate Kameron Loe, who owns a 7-foot boa constrictor named Angel and shares Wilson's passion for movie-going. After watching "Talladega Nights'' and "Reno: 911,'' the roomies pretty much had the dialogue memorized on their way to the parking lot.

The Rangers have shown a willingness to indulge Wilson's creativity, even though Wilson recently had to issue an apology after sending an offensive photo to teammate Brandon McCarthy's myspace page. Wilson is writing a blog for Major League Baseball's Web site, and he's conceived several promotional skits that will air on the Ameriquest Field scoreboard between innings this season.

Whether Wilson becomes a baseball footnote or a cult figure will no doubt hinge on his pitching. Last year he held left-handed hitters to a .155 average (11-for-71), a performance that pretty much assured him a spot on the Texas staff.

"He's got electric stuff, and he understands pitching,'' Loe says. "He's not just a thrower. And he has that fiery mentality [to be a closer]. I think he can do anything he wants.''

So far this spring, Wilson has pitched like a guy with too much on his mind, posting a stratospheric 15.75 ERA in his first four outings. While he's still ticketed to join Ron Mahay as one of two lefties out of the pen, the Rangers dispatched him to a minor league game Thursday so he could work out the kinks.

Ultimately, the line between "entertaining'' and "flake'' depends strictly on how many inherited runners you strand. Being smart hasn't hurt Mike Mussina, Brad Ausmus or Padres pitcher and Princeton graduate Chris Young. Then again, how can braininess carry a stigma when Red Sox general manager Theo Epstein went to Yale?

"It's amazing what the culture accepts,'' Hershiser says, "as long as you perform.''

Does baseball have a place for an eccentric lefty with a fondness for tattoos, auto racing, "Animal Planet,'' Jerry Seinfeld, the music video game Guitar Hero and the teachings of the Chinese Taoist philosopher Lao Tzu? Why the heck not?