VERO BEACH, Fla. -- Dodgers owner Frank McCourt dropped by Vero Beach this past weekend and shared his sunny outlook for the franchise. The big news is the team's upcoming move from Florida to Arizona for spring training in 2009, but that's only part of the story.

If McCourt has his way, Dodger Stadium will have shorter lines at the concession stand, a surplus of attendants to ensure a smooth traffic flow in the parking lots and seats so comfortable the patrons melt into them.

On the baseball front, the development pipeline will churn out lots of players with talent, character, high on-base percentages and sub-3.00 ERAs.

The Dodgers have won one postseason game since 1988, but they lead the baseball world in coming attractions. For several years, they've been awash in expectations because of a surplus of young talent assembled by scouting director Logan White. 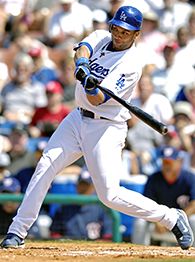 Even the owner and club chairman probably can estimate first-round pick Preston Mattingly's slugging percentage to within a couple of thousandths.

"There's something really special in baseball about following kids' progress and seeing them make the big leagues," McCourt said. "That's part of the fun of the game and something our fans can follow closely."

When things really click, you don't even need a Baseball America subscription to keep tabs.

Given that the Dodgers began the 2006 season with only one "rookie" -- 36-year-old closer Takashi Saito -- they did a nice job of working youth into the mix. Catcher Russell Martin and outfielder Andre Ethier arrived in May and made significant contributions, and reliever Jonathan Broxton struck out 97 batters in 76 innings. In the National League Division Series against the Mets, manager Grady Little's 25-man roster included seven rookies.

But while NL West competitors Arizona and Colorado keep funneling position players to the majors, the Dodgers are pausing to take a breath. Maybe it's the pressure to win immediately, or maybe his paternal instincts at work, but general manager Ned Colletti would rather make a prospect kick down the door than simply throw the door open and watch the poor kid trip stepping over the threshold.

Colletti knows how painful it can be to anoint a young player, then watch him get mentally buried. He was working in the Cubs' front office when third baseman Gary Scott's career went down in flames in the early 1990s.

"[Los Angeles] is a tough place to play because the expectations are very high," Colletti said, "and this isn't an easy game to play. If you find out on Mother's Day that a kid is struggling to keep his head above water every day, you're done.

"I don't think it's a bad thing to let the young players compete inside the team for at-bats and innings. And then, when they're ready, you let them compete against the rest of the league."

As much as the Dodgers are committed to White's young core of talent, this spring has been a mixed bag for Logan's Heroes.

• Andy La Roche, rated the organization's top prospect by Baseball America, could have challenged Wilson Betemit for the third-base job with a strong spring, but he made seven errors in his first 12 games and is playing his way to Triple-A Las Vegas.

• Pitcher Chad Billingsley, a leading candidate for the fifth starting spot when camp began, will begin the season in the Dodgers' bullpen.

• Second baseman Tony Abreu, batting a head-turning .394, jammed his shoulder on a slide Saturday against Houston and will miss two to four weeks.

• Outfielder Matt Kemp, who had 53 strikeouts and nine walks for the big club last year, has struggled enough in camp to reinforce the notion that he lacks the plate discipline to make the jump to the majors.

The one prospect with a legitimate case to crack the Dodgers' lineup is first baseman James Loney, whose .380 average in Las Vegas led all minor league hitters last season. But Loney is a victim of timing, circumstances and J.D. Drew's quest for economic advancement.

The Dodgers ranked 27th in the majors with 153 home runs last year. When Drew packed up 20 of those homers and took them to Boston, the Dodgers didn't feel comfortable handing first base over to a 22-year-old kid who went deep eight times in 366 at-bats in the Pacific Coast League.

So the Dodgers re-signed Nomar Garciaparra to a two-year deal and told Loney to grab an outfielder's glove. If Loney can back up Garciaparra at first and Ethier in right, it will enhance his chances of sticking with the club on Opening Day.

Here's how focused Loney is: In a recent game against St. Louis, he misjudged three fly balls in right but still managed to go 3-for-3 at the plate. He's hitting .410 in Florida.

Colletti concedes that "We're never going to be perfect" in determining when a prospect is ready. There's a fine line between buying a young player time and throwing too many roadblocks in his path, and the Dodgers have flirted with it more than once.

"When you have an overabundance of young kids, in my opinion, their concern isn't about winning. They want to put up good numbers so they can be around for a long time. That's human nature. The veterans are more concerned with winning, so you hope they can feed off each other. Mix up that bowl of spaghetti, and hope everything blends well together."
-- Dodgers left fielder Luis Gonzalez

But with the exception of Juan Pierre's questionable five-year, $44 million contract, Colletti has tried to keep his signings short enough to maintain flexibility. In the past two offseasons, Kenny Lofton, Bill Mueller, Garciaparra and Luis Gonzalez -- who will make $7.35 million to play left field this season -- have signed deals for one or two years apiece.

Ideally, the Dodgers want to create a synergy that spans generations. They envision prospects bringing energy to the clubhouse and veterans sidling up to the kids in the dugout and reminding them how important it is to advance baserunners and do the "little things" necessary to win games. Then, when everyone goes out to dinner, the veterans will pick up the tab.

Gonzalez, squeezed out of Arizona by the Diamondbacks' youth movement, learned the game's subtleties from Glenn Davis, Bill Doran and other veterans as a young player in Houston. He understands his obligations to mentor as well as perform in L.A.

"When you have an overabundance of young kids, in my opinion, their concern isn't about winning," Gonzalez said. "They want to put up good numbers so they can be around for a long time. That's human nature. The veterans are more concerned with winning, so you hope they can feed off each other. Mix up that bowl of spaghetti, and hope everything blends well together."

White, recently promoted to assistant GM, is committed enough to his draft picks to keep the faith during the rough patches. He suspects that La Roche is pressing this spring and points out that La Roche has a history of being a "brutal" spring training performer. One scout in Florida also wonders whether La Roche is playing tentatively after offseason shoulder surgery.

The Dodgers think Billingsley (59 strikeouts and 58 walks as a starter last year) can be a huge weapon out of the bullpen if he can harness his control. Graduation day to the rotation will come soon enough.

As for Kemp, he's not as polished as some of his peers because he spent so much of his youth on the basketball court. Kemp played AAU ball with former Duke star Shelden Williams and was recruited by the University of Oklahoma to play hoops, so he's learning the strike zone on the fly.

"If he was 25 or 26 years old and striking out a lot, I'd be worried," White said. "He'll figure it out and make the adjustments, and when he does, he'll never look back. Matt Kemp is going to be a superstar. There's no doubt in my mind."

The Dodgers didn't invent the rookie of the year award, but they've staked their claim on it through the years. Between Brooklyn and Los Angeles, the Dodgers have produced a record 16 top rookies -- from the acclaimed (Jackie Robinson and Mike Piazza) to the trivia question challenges (Todd Hollandsworth and Ted Sizemore).

La Roche is 23 years old; Kemp, Loney, Billingsley and Abreu are all 22; and prized starter Scott Elbert is 21, so it's not far-fetched to see another rookie of the year down the road.

"It's not hype," White said. "These guys are legitimate."

If payoff is remotely close to what White envisions, the Dodgers are willing to live with the wait.