The Josh Hamilton story is a great one. Good for him. It is nice to see Hamilton overcome his demons and start to thrive again. Baseball is a game of redemption; when you fail there is always a chance to bounce back. He is making the most of his second chance, and I hope and pray that he will keep his life together and fulfill his potential as a player. People deserve second chances. Heaven knows I have had my share.

Hamilton was selected in December's Rule 5 draft by the Cubs and traded to the Reds, which means that he must stay in the major leagues for the Reds to keep him. Otherwise, he will have to go through waivers and ultimately be offered back to the Devil Rays, his original team. What an opportunity for him. He has only played 15 minor league games in the past four seasons due to injuries and drug suspensions, yet he has a chance to be a big leaguer. It sounds great, but there is another side to it. 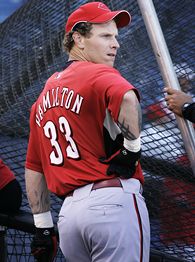 I am not trying to be insensitive. In fact, I am rooting for Josh Hamilton to do very well. If I was a general manager I would want him in my organization to serve as an example of redemption and perseverance. I just wouldn't have picked him in the Rule 5 draft and made the statement that he deserves to be a major leaguer right now. It sends the wrong message to all of the hardworking, dedicated young men who are paying the price to get to the major leagues. Not to mention that it sends the wrong message to Hamilton.

Maybe the organization can spin the decision and find a way to justify it to its young prospects. My experience is that ballplayers see through that. Their take will be that if you have talent, it doesn't really matter what you do or how you
behave -- there is a place for you at the top. That is not the attitude that leads to championships.

Even if Hamilton develops into something more than a spring training phenom, it wouldn't change my decision about the merits of selecting him. But what's done is done, and I for one will root for his success as hard as I can because it really is a great story.