LAKELAND, Fla. -- On the grand scale of America's most mesmerizing sports attractions, where would you say pitchers' fielding practice on the first day of spring training ranks?

OK, it's definitely slightly below March Madness. That's for darned sure. Not to mention Reefer Madness.

So that would place PFP above ... well ... what, exactly? The World Snow Shovel Racing Competition, maybe. But that might be about it.

Which means that we may have reached a new all-time low in the annals of spring training coverage Friday -- because your proud American League champions, the Detroit Tigers, headed out for their first PFP of 2007 and ... 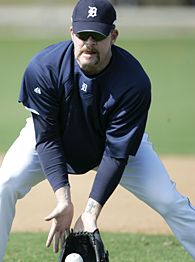 Quickly discovered this riveting drill was being chronicled more closely by the national press corps than that 50-mile traffic jam up north.

I should know. Because I'm pleading guilty to this crime myself. But at least I'm just as guilty as at least two dozen of my media brethren from (literally) coast to coast.

We were there, scribbling frantically, as four coaches pounded fungoes at nine innocent pitchers, manning the four infield positions, on Field 1.

And we made sure the cameras were all ready and aimed as another coach directed "Pitchers Cover First" and "Pitchers Field Bunts and Throw to Third" drills on Field 2.

And we took extraordinary professional pains to wander a whole 50 yards over to Field 3, too, where the rest of the 29 pitchers who'd been dragged into this mess worked on their pickoff throws.

It was quite the spectacle.

And by that, of course, I mean us knuckleheads who were actually covering this stuff -- not the pitchers who were performing these monumentally humdrum acts.

This, however, is what happens when you combine two of the most powerful forces in American sports journalism:

1) A pitching staff that last fall became the first staff in history to commit five errors in a World Series, and ...

2) A bunch of sportswriters and sportscasters trying desperately to justify hanging out in Florida while their houses back in the frozen north country are literally encased in ice.

"Look, I know how this works," said Tigers pitcher Todd Jones. "You all have to have some fresh stuff to write about, and that's cool -- because we kicked the ball around in the World Series. I mean, we set a record, so that's an easy story."

It might not exactly be their favorite story about basking in the glow of a magical World Series season. But the good news is, at least we all got it out of the way fast.

"You know, you just do it, and take your jokes, and come up with some one-liners, and everybody makes fun of everybody and it is what it is," Jones said. "So you accept it. You accept the good things and the bad things. If you're going to make five errors during the World Series, you've got to be able to accept the knock-knock jokes that are coming around during spring training."

Hold on now. Let's listen to the tape again. Yep. That's what he said, all right. So it didn't take a whole lot of begging to get him to tell his own personally authored Tigers knock-knock joke:

"How many Detroit Tigers pitchers does it take to screw up a World Series?"

Now you astute students of knock-knock-joke lore will have noticed something missing from that particular knock-knock joke: namely, the knock-knock portion of it. But you get the idea.

Those who can make jokes about their darkest moments are far more likely to heal and move on than those who can't. Don't you think? Dr. Joyce Brothers said that once, I believe. Or possibly Oil Can Boyd. So if that's true, the Tigers are in good shape. 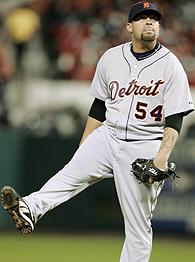 Not only had no group of pitchers ever done that in any World Series. But no Tigers pitching staff had done that in any stretch of five straight games in any of the last 50 regular seasons. That covers nearly 8,000 games.

But it happened in the World Series. What the heck were the odds of that?

Even more to the point, though, what the heck were the odds that a pitchers fielding practice in Lakeland, Fla., on the 16th of February could give us any insight whatsoever into whether the Tigers were going to magically cure their case of E-1-itis here in 2007?

"It's really pretty ridiculous," chuckled Tigers coach/humorist Andy Van Slyke. "I mean, the only way you could duplicate the World Series is, you stick 45,000 people out there watching PFP. Then you might start throwing balls away."

Good point. So what were we thinking? Why were we even asking about this stuff?

"That's like going up to Phil Mickelson, talking about a three-foot putt he missed in July," Van Slyke theorized.

In defense of us, though, there is a difference. Phil Mickelson has stroked about 100,000 three-foot putts since last July. The Tigers, on the other hand, hadn't caught any ground balls, or attempted to throw to any bases, since last October.

And there's one other thing. While that E-1 horror show was unfolding last fall, manager Jim Leyland had joked, at one point, about holding PFP on the plane to St. Louis. A couple of days later, he also said he was going to try to reenact those meteorologically disgusting World Series conditions in spring training by wetting down the fields and then holding PFP.

So who knew he wasn't planning to do any of that? He lured us right into this trap. Don't you think?

In fact, Leyland didn't come up with any drills Friday that he hadn't done last spring -- or any other spring. Asked if his pitchers did anything new in this particular PFP that they hadn't done last year, Leyland laughed: "Off the record? Yeah, we caught a couple."

In case any special prosecutors are reading this, he later authorized the on-the-record use of that quote. But more importantly, Leyland also suggested that any connection drawn between Games 1-5 of the World Series and Day 1 of spring training were purely a figment of our rich, media-warped imaginations.

"First of all, I think everybody's got it a little misunderstood," he said. "It wasn't that we missed the balls. PFP normally is catching the ball. And we caught the ball. ... Just, our aim was a little bit bad when we threw 'em. That's all."

But by the third Friday in February, their aim had miraculously gotten way better. We know that because we couldn't possibly have watched them display that aim more closely. Which is what you rely on us for, right?

OK, so we know that now, all right? But we got a major spring-training story line checked off our list within hours of the plane landing. And that's what matters. We've come. We've scribbled. Now we'll move on. We promise.

Well, after one more Andy Van Slyke PFP quip, that is. And when it was suggested that those trusty Tigers hurlers might not throw five bunt plays away all season, Van Slyke complied.

"It's sort of like A.J. Foyt getting into a fender-bender," he deadpanned. "It's like saying he can't drive."

Well, to be technical, he'd have had to get into that fender-bender in the middle of the Indianapolis Motor Speedway to make this kind of the same thing. But the heck with that. It's time for the words you've been waiting for throughout this entire column: Case dismissed.