FORT MYERS, Fla. -- In a perfect world, the Red Sox wouldn't be doing this.

In a perfect world, the Red Sox would look at Jonathan Papelbon and see their Mariano Rivera, their Trevor Hoffman -- a guy they could wave on in there to save their next 700 consecutive wins.

In a perfect world, the Red Sox wouldn't be searching for their next closer until about the year 2014.

But wait. They're the Red Sox. And when has their world ever been perfect -- except for about a week and a half in October 2004?

So here they are in spring training 2007. And "Who's the closer?" is now a multiple-choice question -- while the man who was nearly the best closer on earth last summer heads for the starting rotation.

"The Red Sox drafted me as a starter, and that's what I'm going to be," Papelbon says, as if nothing had happened since draft day 2003 to make that statement anything but routine.

For that matter, why do the media multitudes keep asking the manager, "Is Papelbon definitely going to start?"

"I understand that when a guy is that good in a certain role, as a manager, it's hard to take him out of that role," Terry Francona says. "So I understand it. But this guy is going to be a good pitcher regardless of where he pitches. And anytime they say you're doing something for a player's best interests, you have to buy into it. It's the only respectful thing to do."

"They," of course, would be the Red Sox medical team. And "they" have a huge say in this, because 5½ months ago -- when Papelbon threw a pitch to Lyle Overbay, then grabbed his shoulder in obvious agony -- the road map to his glittering future changed. 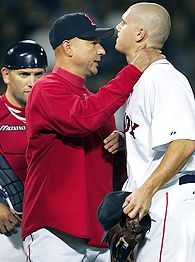 It turned out to be more than just the final pitch of Papelbon's historically dominant season. It was a scary moment that looks now like a career-altering event.

When he walked off the mound Sept. 1, Papelbon had 35 saves and a 0.92 ERA. Just to put that record in perspective, that was merely the lowest ERA in Red Sox history by any pitcher with as many innings as Papelbon had worked (68 1/3). In fact, it was the second-best single-season ERA for any team in the live-ball era.

And it made Papelbon only the second closer since the invention of the modern save rule to save at least 30 games and have an ERA under 1.00. (The other: Dennis Eckersley, in 1990.)

That's an amazing résumé for a rookie pitcher -- a résumé so good, says Curt Schilling, that the guy who compiled it should have been "the Cy Young and the rookie of the year, [except] he got hurt at the worst possible time."

Under ordinary circumstances, no team moves men who are that good at a job that important to some other job. You sure won't see the Red Sox trying Manny Ramirez at shortstop this spring (assuming he ever shows up). And David Ortiz won't be hitting leadoff.

But clearly, these aren't ordinary circumstances. These are circumstances clouding the future -- and present -- of a 26-year-old right-handed folk hero who might have the most unhittable stuff in the whole sport.

Papelbon says the only people confused by this situation are "the media." But we've gotten the impression the confusion is slightly more rampant than that. So we'll do our best to lay out where this stands, even though, for the 25th year in a row, we again forgot to graduate from medical school.

First off, let's explain Papelbon's specific injury. He suffered a "subluxation" of his shoulder, which is -- essentially -- a dislocated shoulder.

That, in basic terms, means "my joint just came out and went back in," Papelbon says. "And that's just because I'm a loose-jointed person. I'm a real lean-muscle guy. I'm not a stocky, composite guy.  The thing about having that body type -- the tall, gawky, loose-jointed person -- is that it's easier to get injured but it helps you to be a better pitcher. So it's kind of the lesser of two evils."

In other words, his particular build gives him more flexibility than the average pitcher -- but also gives him a higher chance of suffering essentially the same injury again.

So surgery wasn't required. Instead, Papelbon spent the winter working on "a strict shoulder program." And these days, he says, "My shoulder feels healthier than it has at any time in my career."

But now that he's healthy enough to pitch again, the next step comes down to one of baseball's never-ending questions: Is it easier on a pitcher's arm to start or relieve?

OK, here comes the tricky part: In Papelbon's case, there is no simple answer.

Have the doctors specifically told the Red Sox that Papelbon isn't physically capable of pitching in relief? The honest answer to that is no. But they have told the club he is less likely to reinjure himself if he can stay on as stable a routine as possible. And a closer's routine is about as stable as a JetBlue flight schedule.

"When he gets worn out is when he had some problems. And we're trying to stay away from that. So if we keep him on a routine, he's going to be just fine."

Another complication here is that the Red Sox don't believe in using their closer, whoever that might be, in "orthodox," 2007-ish, three-out, nobody-on fashion. And when their closer was someone like Papelbon, who had been a starter for his whole minor league life and spit competitive fire out his ears, they were even less orthodox.

This guy made 18 appearances last year in which he got more than three outs. Trevor Hoffman made none. But Papelbon isn't into second-guessing himself or anyone else.

But the manager admits he thinks back on some of those days he waved for his closer early and wonders whether any of that contributed to Papelbon's injury. Yet, for most of the season, there were no warning signs indicating anything dire was coming.

"We asked a lot of him," Francona says. "It was our only way to win. But it's a valid point  because how do you separate what's too much? Because he's such a competitor, he'd tell you every day he's fine. And you appreciate that. It's part of the reason he's good. But it's hard to draw that line when you're competing every day."

So knowing what they know, and knowing the temptations inherent in Papelbon's old job, the Red Sox are trying to take the safe route. Who could blame them?

If the Sox had been able to sign or trade for some sure-thing, game-over closer this winter, the Papelbon questions undoubtedly would be very different this spring. But when the answer to "Who's the closer?" is "We don't know yet," for some reason that seems to bring out the skeptic in 88 percent of the residents of New England.

So when Francona is asked whether his team has totally closed the door on Papelbon's closing again, you won't hear any slamming sounds in the answer:

"Absolutely? Positively? Ever in his future? Probably not," the manager says. "But there are a lot of things that would have to happen for him to ever go back. One is that he would have to get medical clearance, because until he does, he's not going. We would never do that. The other thing is, he would have to struggle as a starter, which I don't think is going to happen.

"And the other thing is that we would have to have guys struggle in the bullpen. There are a lot of variables that would all have to happen, and I think it's a very small margin. But to say you absolutely close the door, I don't think is fair, either."

So on one stage this spring, Joel Pineiro, Mike Timlin, Brendan Donnelly and Craig Hansen (among others) will be working on their Goose Gossage impressions.

It will be a show guaranteed to fill New England with never-ending trepidation. But the least-anxious guy in the theater will be the guy who is the central figure in this drama.

Fortunately, we're sure the Red Sox will be just as happy to take what they can get, too. Well, as long as it doesn't involve any more subluxations -- or blown saves in any Game 7s in Yankee Stadium.