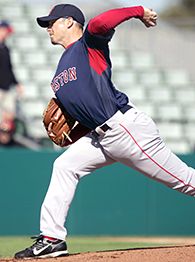 His mechanics were good and his command was outstanding as the
Boston Red Sox left-hander retired all three batters he faced on
grounders.

"It's great. Just to get back and be normal again is awesome,
just to get back on the mound and throw the baseball and not worry
about other things," the 23-year-old said. "So it's good, and I
enjoyed it and, hopefully, we just build from here."

Lester underwent chemotherapy after being diagnosed with
anaplastic large cell lymphoma late last season. He's now cancer
free and has regained much of the weight he lost during the
treatments.

The plan was for Lester, an outstanding starter since making his
major-league debut last June 10, to throw just the first inning in
the ``B'' game against the Minnesota Twins. He needed only eight
pitches to get through that. His six fastballs, all strikes, were
clocked at between 88-90 mph. He threw two curves in the dirt at
69-72 mph.

Lester feels strong enough to pitch longer and has pitched in
bullpen sessions at the same pace as other starters. But Boston
manager Terry Francona wants to bring him along slowly.

"They have my best interests involved and I'm not too worried
about it," Lester said. "I'll get my work in one way or the
other, so we'll just take it slow and go from here."

Lester is to throw next in a bullpen session on Wednesday then
pitch one inning Saturday in a simulated game against Boston
teammates. With a very solid starting rotation, the Red Sox don't
have to rush him.

As a rookie last year, Lester became the first Red Sox
left-hander to win his first five decisions. He was 7-2 with a 4.76
ERA. But in late August, he was diagnosed with anaplastic large
cell lymphoma, a type of cancer in the body's lymph system.

He underwent six chemotherapy treatments -- one in Boston then
five in Seattle near his home town of Puyallup, Wash.

Before his fifth treatment, a CT scan showed no cancer. He began
throwing Dec. 4, and the sixth and final treatment took place Dec.
21.

Lester reported to training camp in early February, about two
weeks before pitchers and catchers were due.

On Monday morning, he returned to the mound in a quiet, cool
stadium. The temperature was 54 degrees when the game began. About
15 scouts, at least three with speed guns to measure his pitchers,
sat behind home plate.

Only about 200 fans were scattered throughout the stands and
they didn't have to pay since teams don't charge admission for
"B" games.

"I tried to treat it as much like just a normal game as I
could, tried not to get too amped up, tried not to worry too much
about it and just get a good night's sleep and come in here and get
my work done," he said.

There were some jitters on his first pitch to second baseman
Casilla. But that 88 mph fastball down the middle for a called
strike was a significant milestone.

"After that first pitch," Lester said, "it was like, OK,
everything's back to normal, throwing to hitters again that I don't
know and just enjoying it, having fun."