JUPITER, Fla. -- Daisuke Matsuzaka reached to snare a line
drive, then grinned and bowed to his shortstop. 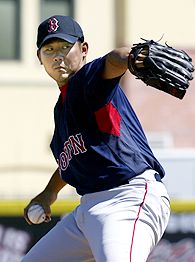 It turns out the rookie from Japan is a pretty good fielder.

He can pitch, too: Matsuzaka threw three scoreless innings for
the Boston Red Sox when he faced major league hitters for the first
time Tuesday.

Dice-K allowed two hits, walked one and struck out three against
the Florida Marlins. The right-hander threw 47 pitches, 31 for
strikes, including a first-pitch strike to 10 of 12 batters. He
escaped a one-out jam in the second after giving up a walk and a
double.

"My readiness for the season is difficult to judge from the
outside," Matsuzaka said through a translator. "I'm probably 40
to 50 percent there."

His fastball topped out at a brisk 151 -- that's kilometers per
hour, as measured by Japanese TV. It translates to 94 mph.

Matsuzaka made the trip from the Red Sox complex in Fort Myers
on Monday. That proved wise because the team bus got lost Tuesday
and arrived more than an hour late for batting practice.

Matsuzaka, meanwhile, remained right on schedule in his
transition from Japan's Pacific League to the American League. He
signed a $52 million, six-year contract after Boston agreed to pay
the Seibu Lions $51 million for his rights.

His Grapefruit League debut drew a sellout crowd of 8,044,
including some who began lining up for tickets at 5 a.m. Tuesday,
and 150 members of the media, the majority Japanese. Because of the
small press box at Roger Dean Stadium, some reporters watched from
folding chairs set up three deep down the right-field line.

The game was televised live in Japan, where the first pitch was
at 3 a.m.

"We heard there was going to be a ton of media, which there
is," Florida's Dan Uggla said. "As Marlins players we're not used
to this stuff. It's exciting to us. We had fun with it.

"He's definitely got the ability to be a dominant pitcher. He's
got the stuff, he's got the command. He has done it in Japan, and
there's no reason he couldn't do it here."

Two dozen cameramen and photographers clustered on the field
near the Red Sox bullpen to record Matsuzaka's pregame warmup. A
security guard scolded them when they strayed too close to the foul
line.

The first batter Matsuzaka faced was Hanley Ramirez, a former
Red Sox prospect, who took a fastball for a strike and was then
retired on a one-hopper to the pitcher.

Ramirez lined out in the third to Matsuzaka, who reacted quickly
to make the grab.

"I'm working with the manager and the coaches on a lot of
infield practice," Matsuzaka said. "I think you saw the result of
that practice today."

Matsuzaka walked Joe Borchard on a 3-2 pitch to start the
second, then gave up a one-out double to John Gall. Borchard would
have scored had the ball not bounced off the warning track and over
the fence.

When Scott Seabol worked the count to 2-2, catcher Jason Varitek
went to the mound for a chat. Matsuzaka is apparently progressing
well in the English lessons he's taking, because he covered his
mouth with his glove to prevent the Marlins from reading his lips.

Varitek said he used sign language to aid the conversation.

"He understood me, which I wasn't sure," Varitek said. "He
made a good pitch."

The slider struck out Seabol looking. Eric Reed popped up the
next pitch on a bunt to end the threat.

Matsuzaka threw a bullpen session Monday, a rarity for a pitcher
on the day before a start. The Red Sox gave the OK only because
it's part of Matsuzaka's normal routine.

"It's a continual feeling-out process on both sides," manager
Terry Francona said.