PORT ST. LUCIE, Fla. -- It was one of the worst collapses of all time -- not as bad as the Phillies in 1964, but it was close. It was supposed to be the year that the Mets avenged a painful loss to the Cardinals in Game 7 of the 2006 National League Championship Series; instead, the Mets became the first team in history to not make the playoffs after having a seven-game lead with 17 games to play.

Under the bright, hot Florida sun recently, Mets general manager Omar Minaya was asked how long it took him to get past the crushing end of the 2007 season. He paused and said, "Me? As competitive as I am, I never get past those things -- I'm still not over losing to the Cardinals two years ago. Competitive people don't get past tough losses. I don't think about it, but I still remember basketball games we lost in high school, and I'm still ticked off.'' 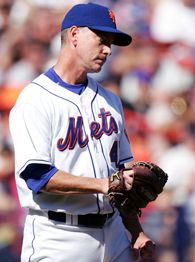 This was no high school basketball game. This was a team that had every right to think it was going to the World Series, but wound up becoming the first team since the 1938 Pirates to have a seven-game lead at any point in September, and not finish in first place in a division or league.

"I remember leaving New York and coming down here [to Florida] as soon as the season ended,'' said Mets backup catcher Ramon Castro. "The people at the airport, the fans, they were ticked. They looked at me and said, 'How could you guys lose?'"

It was a team-wide failure. Their defense was not good; in one, two-game stretch, the Mets made 10 errors, the first team to do that since the 1985 Red Sox. The offense wasn't good, led by shortstop Jose Reyes, whose dropoff in the second half of the season was never more apparent than in September when he hit .205 and stole five bases (with four caught stealings). Their bullpen failed down the stretch in part because it was exhausted from overwork; the Mets lost consecutive games that they led by four runs for the first time since 2000. The staff ERA in September was 5.11, marking the fifth straight month that the team ERA increased, beginning at 2.69 in April. The rotation was so shot by the end of the season, the Mets became the second team in baseball history to have a starting pitcher (in this case, Philip Humber) make his major league debut during the last week of the season with his team fighting for first place -- that is, either two games ahead or two games out of first.

"It's hard to believe,'' said center fielder Carlos Beltran. "But we have to learn from it and make sure it doesn't happen again.'' Hard to believe? The Mets lost eight straight games at home, the first three to the Phillies, giving the Phils hope and life when only one win by the Mets might have buried them. The Mets lost five out of six to the worst offensive team in the league, the Nationals, who scored 32 runs in a three-game series.

"They looked like they were going through the motions,'' one Nationals player said of the Mets. "We wanted it more than they did.''

The season ended with an 8-1 loss at home to the Marlins. Starting pitcher Tom Glavine, in what would tuned out to be his last appearance as a member of the Mets, didn't get out of the first inning -- the worst start of Glavine's likely Hall of Fame career and one of the strangest, ugliest, worst innings in the history of the Mets. The collapse prompted some media members to question whether manager Willie Randolph should keep his job, and others questioned the heart and makeup of the team. The September breakdown was a driving force behind the trade for Johan Santana, "to show the fans that the Mets were committed to winning,'' Minaya said.

The collapse was a primary topic among the media at the start of spring training. By the end of the first day of pitcher/catcher workouts, Randolph said, "I've answered this question a million times. My initial reaction [to the breakdown] was devastating. But I'm way, way, way past it now.''

The collapse might have cost third baseman David Wright the NL Most Valuable Player award. That didn't bother Wright, but not winning the division troubled him so much that he made very few appearances in the offseason and dedicated himself to getting in even better shape, losing six pounds (down to 204). "With the way last year ended,'' Wright said, "I had to take it out on something. So I took it out in the weight room.''

Wright said he "has trouble verbalizing'' how the 2007 fall could be viewed in any way as a positive, but tried, saying, "for a lot of us, that was our first time in a playoff push; the year before, we cruised. So, as much as it hurts, as bitter as it is, I hope it was in the back of everyone's mind in the offseason. But now it's time to put all of that behind us.''

As much as it hurts, as bitter as it is, I hope it was in the back of everyone's mind in the offseason. But now it's time to put all of that behind us.

It appears the Mets have. Closer Billy Wagner said the collapse has created more of a sense of "urgency.'' The trade for Santana has improved the mood considerably, not just because he is arguably the best pitcher in baseball, but because it gives the Mets something positive to talk about. Otherwise, virtually all the early talk would have been about the collapse.

New catcher Brian Schneider, who was acquired in the offseason from the Nationals, the team that helped derail the Mets in September, said that not one of his new teammates has mentioned the damage done by the Nats. Schneider says that, "is a good sign. Maybe it means we've put it to rest. The only person who has said anything to me about it was a security guy here at the park.''

The Mets appear very secure this spring. They know their starting pitching is much better than it was at any time last year now that they have Santana, and a healthy Pedro Martinez. They know that second baseman Luis Castillo's knee, though not 100 percent, should be better. They know their bullpen should be better with improved health, and the return of Duaner Sanchez. And, it seems, they know they've been through the worst.

Beltran was among several position players who reported early to camp, another sign, Randolph said, "that our guys are ready to get back at it.'' Beltran spoke to the press the first day of pitcher/catcher workouts, and as he got up from the bench and headed for the clubhouse, he turned to the assembled media and said with a smile, "Tell Jimmy Rollins, we're the team to beat.''

Everyone laughed. But he wasn't kidding. And neither are the Mets about redeeming themselves in 2008.