CLEARWATER, Fla. -- You don't measure winning only in the standings.

You also measure it in the mind.

So this is a tale about what happens in that mind -- in 25 minds, to be exact -- when winning happens to a team that hasn't won. That has been told, in fact, that it can't win. Won't win. Doesn't know how to win. 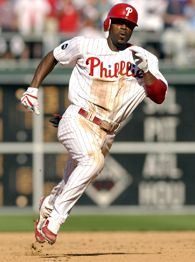 And then, amazingly, that same team wins in a way that should be just about impossible. In a way that makes history.

In a way that changes everyone involved -- but not on the outside. On the inside. In that orb above the eyebrows where the brain waves reverberate.

This is a tale about the 2008 Phillies, a baseball team full of people whose brain waves can't ever be the same again. Not after making up seven games with 17 to play last September to steal the National League East from the Mets.

"There's a feeling," said Jimmy Rollins, the MVP/psychology major of this group. "But the feeling can't really be expressed in words. It's just, you know. You know you're in a group that's going to win. You know what everybody's focus is. It's on winning."

Other years, with other Phillies teams, it wasn't like this. You might have noticed that. Other years, the focus was on other stuff. Stuff that didn't involve a single champagne cork. Stuff like, well, survival.

"That was kind of like the theme -- be competitive," Rollins reminisced, not very nostalgically. "Even in our spring training meetings, it was like, 'Let's go out there and be competitive.' But it was really like, 'We want to be more than competitive -- but.'

"Even though they didn't say, 'but,' you always knew there was a 'but'  'But we're going to be undermanned,' or 'We're not going to have the talent,' or 'We just don't quite know how to get there yet but we'll learn. Everybody's young.' But after awhile, you're not going to be young too much longer."

Yes, after awhile, the years seemed to be whooshing by for this group, until these guys weren't young anymore. The years began to take on a familiar pattern -- the traditional gruesome start, followed by the just as traditional tantalizing near-miss.

So was this a team growing slowly toward success? Or was this a bunch of players who were trapped inside their own reputation -- of a team that could never quite find the last trail up the mountain?

"When I first got here," said manager Charlie Manuel, who first joined this organization as a special advisor in 2003, "I felt like [that winning attitude] wasn't there. I felt like we had some real good players, but putting up numbers or making the All-Star team might have come before anything else. Not that we weren't thinking about winning. But I felt like just playing and [advancing] their careers came first."

Back then, though, Manuel wasn't the manager, either. A fellow named Larry Bowa was. Bowa breathed the fire of winning. But while he raised the bar for everyone around him, he was also more a master of intimidation than inspiration.

So when Bowa was gonged after 2004 and the easygoing Manuel took the reins, the team he inherited couldn't possibly have been more grateful for a different approach.

"I was always cool with Bo, but Charlie came in with a different atmosphere, which made it easier," Rollins said. "It took the militant ways out. You know what I'm saying? And it was like, 'Baseball's a game. Let's go have fun.'

I see a more confident group of guys this spring. The expectations of these guys are huge. We definitely expect to win. It's not even a question. We're gonna win.

"Before, it was like, 'If you didn't get four hits, I don't want to talk to you today. Don't say hi to me if I don't say hi to you.' That's just the way it was. And those aren't winning ways.  It was more about conduct than it was about winning."

But while the approach changed and the clubhouse relaxed, one thing stayed constant: Manuel's seasons didn't end any different than Bowa's.

And last year has changed everything. And everybody.

"We've jumped that curb now," said Brett Myers, now in his seventh season as a Phillie. "That was just a hurdle that we had to achieve. And now, it's a lot easier to know what it takes. I mean, a lot of us really hadn't tasted that.

"I had always known it takes hard work and dedication," Myers said. "But what it really takes is a team."

We know there are still people on this planet who believe chemistry in baseball is a hoax, a myth, a slice of fiction perpetrated by media knuckleheads who don't know any better. But we wish those people luck trying to convince this group of that.

Not so long ago, as Charlie Manuel said, the men who wore this uniform were preoccupied with their own numbers, their own paychecks, their own rationales for never quite getting it right.

Back when Bobby Abreu was the Phillies' centerpiece player, Rollins can recall being sent to the plate to "get on base for Bobby." Now that he's a centerpiece player, hitting in front of bats like Chase Utley and Ryan Howard, he heads for the plate, in the same kinds of situations, with the mind-set that somebody will make it happen.

"Before," Rollins said, "it was like, 'Let's try to get Bobby up there and we'll have a chance.' Now I have confidence that if don't get it done, somebody will get it done behind me. Now we have a team."

Now they also have real leaders, in Rollins and Utley, who took over the clubhouse -- and the chemistry lab -- once Abreu was exported to the Bronx in July 2006.

"To me, [they're] the two out-and-out leaders on this team," said Jamie Moyer, now in his 22nd season of observing big league clubhouses. "Not just on the field. In how they play the game and approach the game. In their work ethic, on the field, off the field. How they act toward people, treat people, talk to people, act toward their teammates."

You know those famous predictions by Jimmy Rollins these past two years? They weren't about the shortstop trying to irritate the Mets or trying to be Nostradamus. They were about leadership.

Rollins and Utley approach that leadership with "no ego," Moyer said. "So nobody has that 'I-don't-have-to-take-BP-today' attitude, or 'I don't have to run.' Everybody is accountable. And if somebody gets sidetracked, it seems to get taken care of."

So a lot of what's different here has been evolving over the past year and a half, at times imperceptibly. But what happened in the final weeks of last season, as this team thundered from behind, propelled these men past their final psychological barrier, in one volcanic eruption.

"I see a more confident group of guys this spring," Manuel said. "The expectations of these guys are huge. We definitely expect to win. It's not even a question. We're gonna win."

To me, [they're] the two out-and-out leaders on this team. Not just on the field. In how they play the game and approach the game. In their work ethic, on the field, off the field. How they act toward people, treat people, talk to people, act toward their teammates.

"You're no longer questioning yourself," Rollins said. "You no longer feel like you have to answer to questions that aren't being asked, but they're getting written about. People give you a break. I'll give you an example: I haven't heard one speech this year about 'We have to get off to a good start.' Why? Because we finally won something."

For the past decade, though, that isn't how it's been. For years, "We Have To Get Off To A Good Start" was practically stamped on every forehead in this clubhouse. Not without reason, you understand, for a franchise that has had two winning Aprils in the past 11 seasons.

"What have we learned? It's the urgency of knowing how to win, knowing how to play like you need this game today," Rollins said. "You learn those things. In the past, we coasted through those things. It was like, 'Damn we didn't get off to another good start. Here we go again.'  Now it's not about the game we lost. It's about the next game."

What's next is a big topic in this clubhouse -- in more ways than one. Much as they enjoyed winning what they won, these men also talk openly about what they still haven't won.

"I don't want to downplay it," said Moyer, "but we didn't win the World Series, either.  We're not here to go through the motions and live off last year."

That focus on what's next is why you don't hear the shortstop talking anymore about who the team to beat is. Jimmy Rollins is raising the bar again -- to 100 wins.

"We won last year, and I want to win this year," Rollins said. "But I don't want it to come down to the last day of the season.  89 wins barely got us in. It showed how good a team we ended up being. But it didn't show from the start how good we were.

"Now we should know from the start how good we are," said this team's professor of psychology. "Don't guess, 'Can you win?' You know that answer now."

And this is one Phillies team that finally seems to have that battlefield all mapped out.

Jayson Stark is a senior writer for ESPN.com. His book, "The Stark Truth: The Most Overrated and Underrated Players in Baseball History," was published by Triumph Books and is available in bookstores. Click here to order a copy.