DANA DEMUTH STILL can't forget the chaos that erupted after the most famous "safe" call of his life.

Jarrod Saltalamacchia remembers screaming: "What do you mean, safe? He can't be safe."

Allen Craig recalls lying in the dirt next to home plate, his sore foot throbbing, not sure whether he had just scored the winning run in a pivotal World Series game.

And Jim Joyce's heart still pounds a little harder when he thinks back on walking off the field, collapsing into his chair in the umpires' locker room, looking around at his fellow umpires and trying to comprehend a moment in October that none of them will ever forget.

It's been five months now. Five months. But the obstruction call that ended Game 3 of the 2013 World Series lives on. 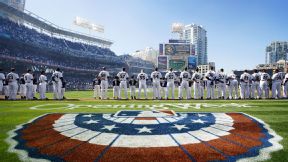 It lives on not just because it made history as the first obstruction call ever to end a postseason baseball game. (And there have been 1,406 of them.)

It lives on not just because the winning run -- the run that caused the scoreboard to read: "Cardinals 5, Red Sox 4" -- was scored by a man (Craig) who never touched home plate.

It lives on not just because it might have been the most confusing finish to any World Series game in history.

No, it lives on because this, ladies and gentlemen, was the end of an era.

What this really was, when you think it through, was the Last Great Umpiring Call (or Calls) of the Pre-Instant Replay Era, the technology which -- beginning in 2014 -- will permeate the lives of every umpire who ever sets foot on a major league field from now on.

Never again will six men in blue work a World Series game, or any other game, knowing there is no replay machine, no technological wizardry, hovering in the background to serve as their safety net.

Never again will there be quite the same pressure on these men to make life-changing, season-defining, history-altering calls in intense, real-time moments.

Joyce was umpiring at third base when Craig and Red Sox third baseman Will Middlebrooks somehow became tangled in the infield dirt. He knew, instantaneously, what that meant.

DeMuth was working the plate -- focused, immersed in the moment as the baseball flew in all directions and one of October's craziest plays ever arrived on his doorstep.

And as the pandemonium exploded all around them, they didn't crumble. They didn't hesitate. They didn't get caught up in the noise, the emotion, the volatility of the madness that seemed to be sucking up every other human in its path.

Instead, they made a call -- or was it two calls? -- that should go directly into the Umpires Hall of Fame (as soon as somebody builds one). Cool. Focused. Perfect. And 100 percent correct.

Why do we only celebrate that type of coolness and October perfection if we see it in a Derek Jeter, a David Ortiz or even a Michael Wacha? Why? Why can't we salute it when we see it in two men no one in that stadium was rooting for?

Those two men in the blue suits held this World Series in their hands, every bit as much as Craig or Middlebrooks or Saltalamacchia did. And five months later, we now know just how lucky the sport of baseball was that Joyce and DeMuth were on that field to give us their own Mr. October moment.

This is their story. The story of the Last Great Call(s) of what we might as well call the Age of the Human Element, carefully reconstructed from the viewpoint of everyone involved.