Everyone knows the Detroit Tigers' logo is the classic old English "D." But if you're a detail-observant fan, you may have noticed that the Tigers actually have two classic logos, because the "D" on the cap doesn't match the one on the jersey.

Having a hard time seeing the differences? Here, take a look at this side-by-side comparison (click to enlarge): 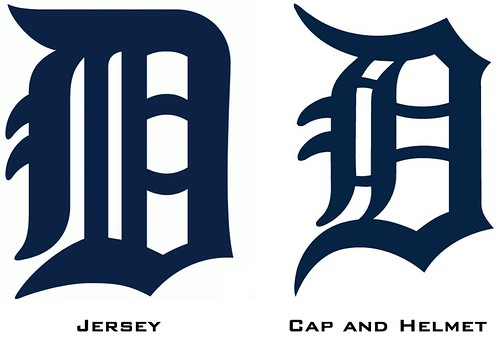 The Tigers' jersey and headwear logos have both evolved a bit over the decades, but they've rarely if ever matched. The inconsistencies date back to the days of Hank Greenberg, Charlie Gehringer, and even Hughie Jennings.

But it isn't as simple as saying, "This one goes on the caps and that one goes on the jerseys." For example, which logo do the Tigers use on billboards? (Apparently it depends.) Or on a team calendar? (Ditto.)

"The two versions are part of our heritage, and they both symbolize our historic uniforms, so we plan to keep both of them," said Ron Colangelo, the team's vice president of communications. "They both have equal value. In fact, when our marketing staff is working on something, they'll take a vote to decide which logo to use with that particular project."

The Tigers are the most obvious example of an MLB team with mismatched logos, but they're not the only one. A surprising number of other teams have inconsistencies in their uniform programs. Most of these discrepancies, including the Tigers', appear to be due to errors that crept into the supply chain years ago, when there was less emphasis on merchandising, brand integrity and centralized control from the MLB office, although the full backstories have been lost to history.

You might think of these logo variations as inexcusable glitches or charming quirks. Either way, here are some additional examples:

New York Yankees: You'd think the tradition-steeped Bronx Bombers would have uniformity throughout their uniform program. But it turns out that one of their traditions is to have multiple versions of their fabled interlocking "NY" logo (click to enlarge):

The differences between those logos may be hard to pick out, but they're there. The distinctions are easier to see in the MLB Style Guide, which sets out the official logos and colors for all MLB teams and makes a point of specifying separate logos for the Yanks' caps and jerseys (click to enlarge): 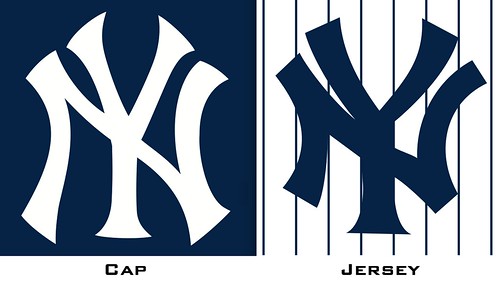 So when did the jersey and cap logos become distinct from each other? "We're aware of it, but the short answer is we don't know why it happened or exactly when it happened," said a team spokesperson. And has there ever been any internal discussion of eliminating one of the versions and using the other one for all applications? "Not that I'm aware of." (For what it's worth, the cap logo is painted behind home plate at Yankee Stadium, so that's the one that has pride of place.)

Los Angeles Dodgers: The Dodgers are another traditionalist franchise that you'd think would have no problem maintaining some logo consistency, right? Wrong (click to enlarge):

As you can see, the top of the "A" on the cap logo isn't squared off like it should be, and the helmet logo is much too wide and its strokes are too thin. The Dodgers' situation is particularly surprising because they're one of the few teams to employ an in-house graphic design director, Ross Yoshida, who takes his role as steward of the team's visual heritage very seriously. What does he think of all this?

"The cap logo has evolved over time with [cap manufacturer] New Era's raised embroidery process," said Yoshida. "Is it slightly off here and there compared to our official logo in the MLB style guide? Yes. If you look at other teams' cap logos, like the Yankees or Royals, there are similar issues. I'm thinking it has to do with the embroidery process. Our BP caps, which use a different embroidery style, are truer to our official logo."

OK, but what about that helmet logo? "When ABC Helmet Company first started mass-producing helmets for MLB teams in the 1960s, pretty much every team's helmet logo differed in some way from the cap logo, because there was less logo policing and the technology was more primitive," explained Yoshida. "We still use that original helmet logo. It's a bit different from our official 'LA' mark, but the nostalgic baseball fan in me likes this quirk. To me, it's kind of cool that all our players, from Willie Davis to Steve Garvey to Mike Piazza to Yasiel Puig, have worn the exact same helmet logo for close to 50 years. So although I debated at one point whether I should try to 'fix' it, I ultimately decided to leave it be."

The A's situation is so confused that both versions of the logo appear in the banner running across the top of the team's home page. And for many years both logos also had a place in the team's uniform program: The cap logo was on the caps (duh) and the other version of the "A" appeared on the team's batting helmets. That changed in 2009, when Uni Watch reader Mark Halling brought the mismatched logos to the attention of your friendly uniform columnist, who in turn contacted A's equipment manager Steve Vucinich.

"One of our batboys had noticed it right around the same time your reader did," said Vucinich, now in his 47th season with the team. "I'm not sure how it happened. The thing is, before MLB Properties [MLB's licensing and branding operation], there was no rhyme or reason, there was no policing of it, there was nobody telling you that you could or couldn't change the logo. A couple of times I think it got tweaked a bit, even accidentally, by the manufacturer, whether it was Wilson or Rawlings or whoever."

Vucinich could have stuck with the separate cap and helmet logos, like Yoshida did for the Dodgers, but instead he changed the helmet version to match the cap version.

"We got new helmet decals made, and I made sure we took all the old ones off and threw 'em away," said Vucinich. "You want it to be standardized -- there's no reason to have different ones. But hey, if I had my way, everyone would wear their pants the same way too."

Atlanta Braves: It's easy to make a logo look crisp and sharp on a decal, but a lot of that crispness can be lost when the logo is embroidered. That scenario is turned on its head, however, in Atlanta, where the Braves' helmet logo -- the one that should be easy to reproduce -- looks like a bloated, fuzzy version of the cap logo:

The helmet version almost looks like something that got run through an old Xerox machine again and again until it started turning blurry -- which may in fact be what happened a few decades back, although we'll never know for sure.

"We're aware of the discrepancy," said a Braves spokesperson. "But it's been that way for as long as we can remember -- it's just the helmet logo that we use."

Kansas City Chiefs: OK, so the Chiefs aren't an MLB team, but it's worth noting that logo inconsistencies extend beyond the baseball diamond. In the Chiefs' case, there are two similar but distinct versions of their classic arrowhead logo. The easiest way to tell them apart is to the look at the lower prong of the "C" -- in one version of the logo it loops higher or more "closed" than in the other.

It turns out that the Chiefs use the open version on their helmets and the closed version for just about everything else. That's odd, but here's something even odder: The NFL Style Guide shows both logo versions on the Chiefs' helmet, depending on whether the helmet is shown in a side view or a diagonal view. Crazy!

Even crazier: Yet another version of the logo appears on the floor of the team's locker room. That one has the "C" overlaying the "K," instead of the other way around.

A team spokesperson pleaded ignorance on all of this, so we're left to puzzle over it on our own. (For a more in-depth look at the Chiefs' logo situation, look here.)

Do you know of more teams with inconsistencies in their visual programs? Don't be shy.

(Special thanks to Marc Gilbert and Jim Santel for their research assistance on this column.)

Paul Lukas likes that the sports world still has room for small deviations and discrepancies. If you liked this column, you'll probably like his Uni Watch Blog, plus you can follow him on Twitter and Facebook. Want to learn about his Uni Watch Membership Program, be added to his mailing list so you'll always know when a new column has been posted or just ask him a question? Contact him here.