Editor's Note: The story below originally ran on ESPN.com in May 2014.

THIRTY-FIVE YEARS AGO, Wayne Gross hit a home run off reliever Ed Farmer, and took his time running around the bases. Farmer was furious, and immediately plotted revenge. But he didn't face Gross again until four years later, and by then they were teammates. On the first pitch of a batting practice session, Farmer hit Gross in the back with a 90 mph fastball.

"What was that for!" Gross screamed.

"That was for four years ago!" Farmer screamed back.

Welcome to the contentious, confusing, contradictory world of baseball's unwritten rules. There are so many of them, and they've existed for over 100 years, that it's hard to keep track of them, to process them.

Back in the 1960s, hard-throwing Stan Williams tracked them this way: He carried a list of names around in his cap.

"What are the names on the list?" Williams was asked.

"Those are the guys I have to get," Williams said.

"Why do you keep them in your cap?" Williams was asked.

"So I don't forget any of them," Williams said.

Yes, the game has changed a little since those days, and some of the responsibility for the enforcement of the unwritten rules has been taken away from the people who play it. Now, Major League Baseball polices the game, not the players. Now, umpires issue warnings after a questionable hit batsman, and often, the next pitcher to hit a batter gets ejected. And with the ejection often comes a suspension, sometimes for as many as 10 games.

Confusing? Contradictory? At least one veteran player insists baseball's unwritten rules are a thing of the past, with no present whatsoever.

"There is no fear of getting drilled anymore," the White Sox's Adam Dunn says. "A guy in front of me, who shouldn't be celebrating when he hits a home run, does, and I'm thinking, 'OK, they're coming after me now.' And it never comes. When you do something like that -- celebrate at home plate, or make a slow trip around the bases -- someone has to pay for that, preferably you. But the unwritten rules are dead. They are gone."

"David Ortiz does the same bat flip after every home run. He carries a Mariachi band around the bases with him every time he hits one. But it's OK because he's Big Papi." Brandon McCarthy

Make no mistake, though: Lines that aren't spelled out in any edition of the Official Baseball Rules still get crossed, and the players who cross them still face vigilante ramifications for their transgressions. The 2014 season is less than two months old, but it's already given us -- among other things -- a brawl in Pittsburgh over one unwritten rule, three ejections in St. Petersburg over another, a word war between the A's and the Astros over a third, and a tit-for-tat, by-the-(unwritten)-book reprisal in St. Louis over one more.

Dunn isn't wrong, exactly; it isn't as easy to retaliate as it once was. But he probably does over-state the situation. The unwritten rules are far from dead. And they still abide by one principle: This is a hard game played by hard men, vengeful men without remorse who have really long memories. If you disrespect them, their team or the game, you will pay, often with something in the ribs at 90 mph.

Baseball's unwritten rules quietly took form in part to reprimand a player for running too slowly around the bases, celebrating as he goes, after a home run in the eighth inning of a 10-1 game, and, in a development of the past 10 years, flipping his bat as he stands at the plate to admire his feat. The unwritten rules were built to penalize a player who stole a base when his team was ahead by 10 runs, or swung as hard as he could at a 3-0 pitch when up by 12, or dropped a bunt in the ninth inning to break up a no-hitter.

And those are just a few of them.

"THERE ARE SO MANY UNWRITTEN rules in baseball because you can't fight, and you can't tackle people," says Cubs catcher John Baker. "In hockey, you throw down your gloves and fight. In football, you're allowed to tackle a guy. In baseball, there is so much separating opposing teams. You can go hard into second base and [you] might run over a catcher, but you can't run over the pitcher. There's not a platform for retaliation when you're frustrated or upset."

Diamondbacks pitcher Brandon McCarthy asks, "But aren't there unwritten rules in every industry? In journalism, you can't steal sources, right? In hockey, guys don't take their skates off and slash an opponent's throat with the blade. In football, you never see a guy take off his helmet and just bludgeon an opponent. We've been playing baseball since the 1800s. We just have more unwritten rules."

And every one of them is debatable and fluid and arbitrary.

To some, it's an unwritten rule that a hitter shouldn't dawdle before he gets into the batter's box.

"I've yelled at hitters, 'Let's go! Get in the box!'" Baker says. "But they have a certain walk-up song. They have to mimic a certain part of it, so they wait until that part of it plays. It's like they're on a runway getting into the box, instead of just playing the game."

McCarthy says, "That pisses me off, too. The rhythm of the game stops when that happens. Baseball becomes bad entertainment. The same thing applies with a pitcher that doodles around out there. That drives me just as nuts. Clay Buchholz is a really good pitcher. I love his stuff, but I can't watch him because he takes so damn long between his pitches."

Wilson says, "It's ridiculous how long it takes guys to get in the box, or pitchers to throw the ball. Guys on their own team yell at them, in very colorful language. 'Get in the box! Throw the ball!' Some guys are serial line-steppers; they are habitual line-steppers. That's how they get the reputation as a rain delay. What I love is the pitcher who has two pitches, and he shakes off the catcher five times. We yell, 'Pick one!' But really, the guy at the plate digs a hole, adjusts his helmet, wiggles his butt, swings the bat, adjusts his wristbands? You wonder, 'What were you doing all that time in the on-deck circle?'"

And to others, a new unwritten rule was established a few years ago when the Yankees' Alex Rodriguez ran across the mound after making an out, infuriating A's pitcher Dallas Braden, who claimed that the mound belongs only to the pitcher, and that no runner shall cross it.

"I'm with Alex on this one," Baker says. "I'm going to have to use pretzel logic to defend Dallas, a friend. That was just Dallas showing that he grew up on the mean streets of Stockton, the whole '209' thing. He has been wildly competitive his whole life. Until that, I had never heard of it. I had never even thought about it. That was all in Dallas' mind." 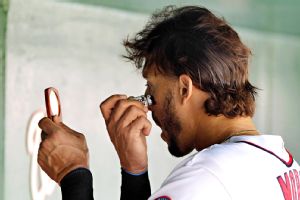 Michael Morse is the one with the compact and the makeup here, but he's hardly alone in MLB.
Rob Carr/Getty Images

Wilson says, "I always stay on the mound after a pitch, so it would be pretty awkward if a hitter ran across it while I was still standing on it. It's not a sanctimonious thing with me. Alex has had some instances where he's done some stuff -- like, a few years ago, yelling at the Toronto third baseman [Howie Clark] while he was trying to catch a popup. That's just lame."

The Orioles' Chris Davis says, "I'd never run across the mound. I'm afraid I might trip and fall."

The Marlins' Casey McGehee says, "I'd never do that. I don't want to get anywhere near the pitcher that just got me out."

And Dunn says, "I'd never heard of it. I do it all the time. I hate to run. The fastest way to any point is a straight line."

Another unwritten rule is gaining steam these days, too: too much bling.

"The guy with the eye-wash, wearing nine wristbands, and shin guards, and eye black, with seven chains around his neck," says Baker. "When you bring attention to yourself, that's when they throw at you."

And there must be a million unwritten rules that govern the clubhouse.

"With Arizona, we had a bathroom stall, a handicapped stall, which was bigger than the rest of the stalls," says Brewers first baseman Mark Reynolds. "There was a sign on the door of the stall that said it was only to be used by guys with four years of major league service. Really stupid stuff."

There are so many unwritten rules, according to Baker, that, "We need to write them down."

And yet, if they are written down, Reynolds says, "The game would be chaos. Things happen in a game, behind the scenes, that people don't even know is going on. We keep them in-house."

"With Arizona, we had a bathroom stall, a handicapped stall, which was bigger than the rest of the stalls. There was a sign on the door of the stall that said it was only to be used by guys with four years of major league service. Really stupid stuff." Mark Reynolds

Chaos? Several years ago, Joe Horn, a wide receiver for the New Orleans Saints, scored a touchdown, pulled out a cell phone that he had taped inside the goal post, and made a call, or at least pretended to.

"And no one in football cared!" Baker says. "If that had happened in baseball ... if someone had hit a home run, reached home plate, took a cell phone out of his stirrup and called someone, he wouldn't finish the phone call. There would be balls flying into both dugouts. It would be like a Cuban winter-ball game, with guys running around with bats in their hands. Oh my God, the world would stop spinning on its axis. The ice caps would melt."

McCarthy laughs and says, "Oh my God, he would never get to home plate. Bats would be tomahawking out of both dugouts. Where would a player hide a cell phone, under a base?"

McGehee says, "The game would never get to the next hitter. It would be so ugly."

Says the Tigers' Torii Hunter, "That would start the greatest brawl in major league history. I would drop my glove, chase the guy down, and beat the s--- out of him. And I'd do the same thing if he was on my team. The camera shot would be of his entire team, piled on top of him, pummeling him. I hope that never happens in baseball."

Yes, there are a million of them. We're going to limit our look to the five that seem to be the most firmly etched in stone ... well, maybe not etched. Remember, they're still unwritten -- including the one about the on-field cell phone.

"Oh, it's going to happen in baseball," Dunn says. "And the guy who hits the homer will take his phone out of back pocket and tweet it before he reaches home plate. But when that happens, I'm leaving. I'm retiring. I'm done. I'm going home."