This story appears in ESPN The Magazine's May 9 Fame Issue. Subscribe today! Read this article in Spanish here.

SINCE HIS DEBUT in late 2012, Manny Machado has been one of the best third basemen in the league -- and that's not even his natural position. The Miami native grew up idolizing Alex Rodriguez and taking grounders at short, but with J.J. Hardy under contract for the Orioles, he switched positions to make it to the majors. With his O's off to a hot start this season, fueled by his AL-leading .407 average through April 20, Machado talked about mastering third base, his relationship with his idol and which O is a secret Belieber.

Do you still have the desire to play shortstop?
It's there. But at this point, I just don't think about it that much. I know I could play the position, but I am so focused right now on being the best third baseman I can be for my team. Third base has gotten me to where I am now. I love the position, but my heart is still at shortstop. 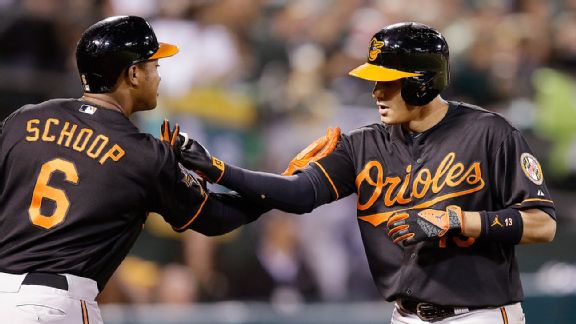 "Sometimes I have heard people say he doesn't care or he doesn't work hard, because of how relaxed he looks at third base. That could not be further from the truth."

What was the hardest thing to learn?
Finding the angles. When you're at shortstop, you have so much wiggle room. Third base is about reaction -- a 90-foot reaction. You have no time to move your feet to get in the right position.

So take us through your thought process when a batter steps up to the plate.
My first thing is trying to find the bat angle by keeping your eye on the hitter. You can't keep your eye on anything else. It's a lot easier with hitters you know or see often. Let's say Jose Bautista, I know he's going to catch the ball out in front. He is looking to do damage. Certain guys pull more, so I have to play pull a little more. Some guys hit it more toward the 5-hole, so I have to play a little off the line. I really go with the scouting report first, but other than that I just go with true instinct.

As a former shortstop, how much of your play at third is instinctual versus thinking through each motion?
It's all about instincts. People talk about being a prepared-for-any-situation kind of infielder. I don't think that's the type of player I am. I just let my talent go with it. I know the scouting report. I know what the hitter is going to do. So I just try to make the play. In the end, you're your best scouting report.

You wanted to play shortstop because of Alex Rodriguez, right?
Growing up in Miami, it was all about A-Rod. Alex was a Miami guy, so us Miami people stick with our Miami people. Alex was just one of those guys I always looked up to.

You met him when you were in high school, but did you get closer after you made it to the majors?
A funny story: I didn't have his number. I always went through somebody I knew that's close to him. So that person told me, "Hey, Alex wants me to give you his number, so just shoot him a text." So I had his number for a couple of weeks before I could even try to text him. I was like, "What I am going to say to him? 'Hey, what's up, Alex, this is Manny'?" It's awkward! I still get a little starstruck when I see him. It's A-Rod. He's one of the best players that has ever played this game. He's like a big brother to me, just helping me out with baseball and personal stuff. I consider him a friend. 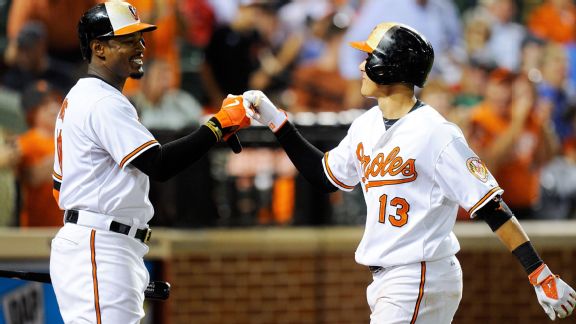 "He is a budding super star. He is on the level of being something really special, and would be talked about more if he was in a different market. We don't get the same attention. But Manny, like the rest of us, likes it that way. We just go out and play. We don't need it."

"In the clubhouse, we call him "Orejón": "big ears" in Spanish. No need to explain why."

What does being from Miami mean to you?
Miami gives you everything: the sun, the beach, the heart, the grind. This is what we bleed. Miami was all about baseball. From Friday to Friday, it was nothing but baseball. We were at the ballpark every day. We were just bleeding the dirt, bleeding the bats. We have such a passion. We will never take the game for granted.

Tell me about the Miami boys.
We call ourselves the 305 Boys. It's a tight group: me, Jon Jay, Yonder Alonso, Gaby Sanchez, and we have added a couple of minor league players who work out with us -- we're smoothing them into the crew. But you got to be a true 305 -- from the Coral Gables, the Southwest and the Hialeahs.

What's a perfect day in Miami for the 305 Boys?
Let's see, wake up around 6:30 a.m. We all go together to the gym. Then we go hit. We throw at the facility where we work out. Then we go to work with our boy Pete Suarez at Phenoms Baseball, and we do all our tee stuff there. After that we might go have some lunch at 3 Chefs, a little Cuban spot -- some chicken with rice and beans and some lettuce and curry sauce or some garlic cilantro sauce. Then we go to our new spot, the new house I am building in Coral Gables, or to Jon Jay's house, which is a boy's dream -- he has every toy possible there. We'll Jet Ski. We like to paddleboard. We might play some dominoes. Then for dinner, we're low-key. Sometimes we go to Prime 112. Drunken Dragon is one of our favorite spots, or Hillstone. There are a couple of more spots, but I can't give you names because it's for the 305 Boys. It's a secret.

You got married to longtime girlfriend Yainee Alonso [the sister of Yonder, who is Machado's best friend] in the 2014 offseason. How has that helped you?
I have no distractions. You just go out there and play. And then you go home to a beautiful wife, a person you can talk to, a good friend. I go home, and it's amazing. I have my dog waiting for me at the door, Kobe -- that's for Kobe Bryant. It's awesome coming home to him -- he loves me no matter what. I can go 0-for-4 and he is going to love me. He's going to smile, jump on me. He's always happy and excited to see me, just like my wife is. 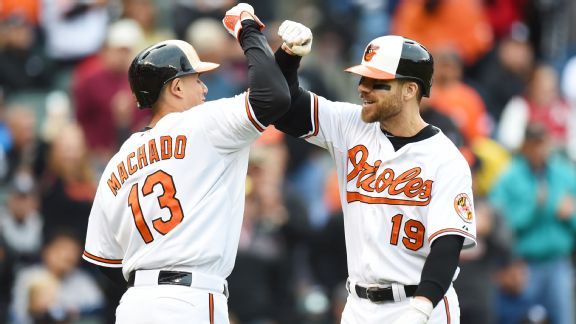 "He is a lot more tender-hearted that he leads on. I will throw him straight under the bus. He puts on this tough bravado, but he's got such a soft, kind heart."

"Manny and Jonathan Schoop are connected at the hip. I don't know if we can find any evidence that they have the same mother, but they are certainly two of a kind."

I heard that you set a goal for yourself this year to be the best teammate you can be. How did that come about?
I've been injured the past couple of years, and last year was the first time I was able to have a full spring training, doing the little things we all hate in spring training, the bunting drills, all those things.  I was able to finally feel that I was part of a team; I started talking to everybody, getting to know them. I'm pretty low-key. I don't talk much; I keep to myself. There's days that I don't talk, and people can take that the wrong way sometimes. So this year I'm just trying to get to know everybody, every single teammate -- make a point to talk to them and see what they like and what they like to do.

Share some of your teammates' superlatives. Who's the class clown?
Caleb Joseph is definitely the funniest. He makes us laugh. He does the best imitations. He can imitate anybody -- he's pretty good at Buck [Showalter]. Best dressed? We have a good-looking, well-dressed team. But the worst dressed is definitely Ryan Flaherty. We also have a kid who is a big Justin Bieber fan and sings Justin Bieber all the time. I won't tell you who it is. You'll have to guess. But we are all going to the Bieber concert together.