This story appears in ESPN The Magazine's May 23 WNBA Issue. Subscribe today! This interview was conducted in Spanish, then translated and edited for clarity.

YASIEL PUIG HAS been called many things during his four seasons with the Dodgers: a star, absolutely, but also a slacker, a reckless outfielder and even an awful teammate. This year, he says, he just wants to be a good guy. Here, he shares the 10 motivations that most define his new, true self.

1. He's eager to shed that "bad teammate" rep.
This year things are better. I think it's because my teammates see the effort that I am putting in every day, which I didn't do before. They see the change in my behavior, and I think it has helped to have better relationships in the clubhouse. My only goal this year is to work hard and give my all, and I want to maybe win the Roy Campanella Award [selected by Dodgers players and personnel for team leadership]. Then people can see that maybe it wasn't all about Yasiel Puig being wrong. 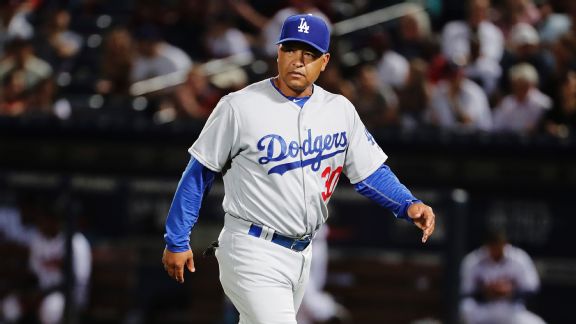 "I think the number one thing is that he has opened his heart to me and his teammates. That was the first thing I asked him to do when I met him this winter. I told him: 'If you want to be a good teammate and be a better player and win a championship, you have to open your heart.' And I think from that moment on he has done that, and I very much look forward to seeing him every day. "

2. He'd rather focus on Dave Roberts than on former manager Don Mattingly.
With Mattingly, our personalities didn't mesh. Dave Roberts is a great person; he helps me every day. If I do something wrong, he talks to me straight up and addresses it. He respects me, and I respect him. He encourages me and has confidence in me, and I think that has been the difference. He lets me be me, lets me enjoy playing baseball and have fun.

I'm very thankful to have him as a manager. He has helped me so much in the little time that he has been here. He's like that with all of us. He supports us when things get difficult. But we also have a good time; we laugh. That's what we need to keep that confidence and continue performing on the field: We need a laugh every once in a while.

3. In Bryce Harper, he believes.
Bryce Harper is my idol now. I'm going to join him in the "make baseball fun again" campaign; I'm just waiting to get my shirts and baseball caps. He's always been a great friend and a great athlete, and I admire him. I like how he plays the game, and I think he gets it. It's good to see an American player saying that there needs to be a little more fun in baseball. Fans leave everything behind to come and see us play. We have to make baseball fun for the fans and not take everything so personal.

It's not about Harper or Puig making noise about it. In baseball, it is more common for a pitcher to punch you out three times than for you to hit the ball out of the park. So after you have struck out three times against a pitcher and you finally get a home run, bat flips are just an emotional expression -- not about taunting the pitcher. That's what Jose Bautista did [in Game 5 of last year's ALDS]; he changed the result of that game with that swing. It was a big thrill for him, and he flipped the bat. He has always been a respectful player and only flipped his bat when he was overcome by emotion. Afterward, he was criticized as if what he did was wrong. But he had fun!

4. That 360-foot throw against the Rockies on April 22? Yeah, it won't be the last time he'll air it out.
Making a spectacular throw is something I never think about. I always believe I can make the throw, so I think that's why they come out that way. I really can't tell you how I do it. I actually look them up on YouTube afterward, and I wonder myself how I was able to do that!

Maybe it's because of all those years knocking mangoes and mamoncillos down to eat them: Those trees are really high! There may be players with better arms out there, but I am completely fearless when I throw.

5. His perfect day in LA is ...
My team wins, and I go 3-for-3. Or, on an off-day, I have a nice breakfast in my house with my girlfriend. Then watch movies in bed. Play some pingpong maybe. Just relax in the house. Then we can go out at night to a restaurant, no matter which one. I like them all, as long as there's food and people dancing.

6. He loves playing the Rays, but not because he's dying to hang with Hank Conger.
My son, Diego, lives in Orlando with his mom. I brought him to Dodger Stadium last year and will hopefully bring him for Father's Day. I try to see him when we go to Florida. I told myself that when I had a son, I would give him the name Diego Alejandro. It probably came out of one of those soap operas I watch. 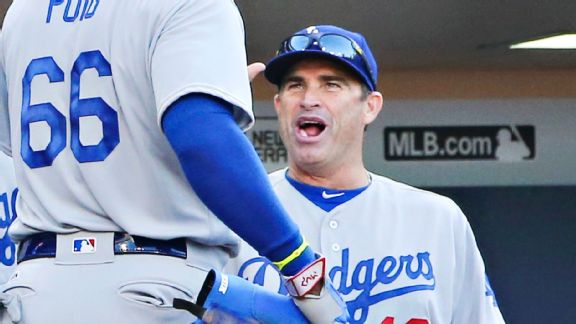 "He's been so coachable. It's the opposite of what I thought I had heard about him. I was pleasantly surprised to hear him willing and wanting to make some adjustments. He made things easier for me and it's been great working with him. I have actually told people he has been one of the easier guys to work with."

"Across the field, he reminds me of Bo Jackson. That kind of physique and all the things he brings to the table: the powerful bat, the strong arm, the speed, all that kind of stuff that you see."

7. He's not down with the dad bod anymore.
I never really liked to go to the gym before, but because I'm trying to do things differently in 2016, I am training regularly to have the fitness I need to last the entire season. I got injured last year, but I don't think being overweight was the reason. But I acknowledge that last year it looked like I was five months pregnant.

The team did ask me to lose weight this offseason, but that's not why I did it. I did it for myself. I can now go to the beach shirtless. I have my six-pack back. Well, I have about a four-pack right now. I am working on getting the other two back.

8. The beautiful game speaks to him. (And so does Ronaldo.)
In Cuba, you always heard about the most famous baseball players, like Derek Jeter, Albert Pujols, those kinds of players. But I didn't really follow MLB because I didn't like watching baseball. I love to play it, but I don't enjoy watching it. I watch and follow soccer. I'm more likely to watch soccer on TV over baseball. I have Real Madrid in my blood. I have all my Madrid jerseys, even with my last name and everything. I'm a Madridista. And I'm going to go to Santiago Bernabéu Stadium this year, God willing. I met Cristiano Ronaldo when he threw out the first pitch at Dodger Stadium. I feel pretty happy and lucky to be here with this team, which is so famous that they bring in many famous people to throw the ceremonial first pitch. You have the opportunity to meet everyone here!

9. After seeing the MLB exhibition in Cuba in March, he can't wait to put on a national-team uniform.
It was nice to see people so joyful [at the exhibition], especially because President Obama was there too. Maybe something can be done and things can work between both countries. You never know. We have to wait. God and the people behind this are the only ones who know what might happen. It is not dependent on what I hope or what I think about it.

The Cubans who are there and the Cubans here would be very happy to see that happen. I would love to wear Cuba's jersey again -- we would actually be a very good team! It would be a very good World Baseball Classic if Cuba allowed us to make the team.

10. His heart will always belong to Cuba.
I went with MLB in December [a trip for which he was given special permission to enter the country by the Cuban government -- he had been barred after defecting] and then went back another time by myself. The best thing that happened on the trip was spending time at youth baseball clinics, in addition to seeing some members of my family once again. I was able to see my brother again. I went back to the barrio where I was born because I wanted to surprise the group of guys that helped me when I was a little crazy kid there in Palmira.

It was fun to go back to the old neighborhood and visit all the places where I went around misbehaving: stealing mangoes so I could have something to eat. A guy went by selling croquetas, and I bought like 100. People were making fun of me, saying, "Hey, if you are a millionaire, how come you are eating croquetas?" I told them that doesn't matter. Let's eat some croquetas together.

I sat with them to drink and eat for a while, and we were telling stories, and there were some tears because we had not seen each other for a while. Did I cry? We cheerful types can also cry, you know. I cry when I'm not hitting!