Come sit with me in section 416 at Wrigley Field.

Put the carnival of bars that surround the park behind you, and enter at Gate K, opposite the Firehouse on Waveland Ave., just around the corner from the iconic marquee at the intersection of Addison and Clark streets.

Weave your way through 2016's dense crowds. The hype for the Cubs this year is higher than their run differential, a crazy number that reads like votes stolen per precinct by former Chicago mayor Richard J. Daley's old Democratic machine. So far, the team is exceeding expectations, despite the loss of slugger Kyle Schwarber and the occasionally merely human performance of reigning NL Cy Young winner Jake Arrieta. 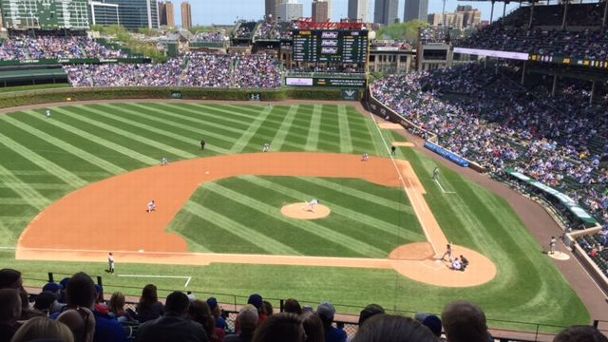 Security personnel will direct you to the Metal Detector Kabuki Theatre, new to the park this year. The security honchos at MLB gave the club a break in 2015, due to the construction of the bleachers and the new video boards. There weren't enough toilets, much less room for metal detectors. Be early; this is not a fast process. Pick up whatever promotion is being given away. Buy a scorecard and a pencil.

Then take a hard right to climb up four flights of stairs. Before the current Wrigley renovation, this was a gentle circular ramp, but progress takes its toll on both ballpark aesthetics and your knees.

Head south on the 200-level concourse and past the first two ramps to the upper deck, each of which will require a buttonhook 180-degree turn.

Stop at the beer stand just past the second ramp, and say hello to Laura or Nicole. Laura's a roller derby veteran who skates under the name Val Capone. She sang "Take Me Out To The Ballgame" during the seventh-inning stretch back in 2009, when Drew Barrymore was in town to promote Whip It. Word on the street is Nicole might be a White Sox fan, but don't hold that against her. Get a drink, and catch up on the in-house gossip.

Now, look to your left at the beautiful place that is Wrigley Field.

The view is partially obscured by the "skyboxes" that have hung from the front of the upper deck since 1989. If you sit in the last 20 rows downstairs, you'll never see the top of a fly ball's arc. That's one reason to prefer the upper deck.

Walk up the third ramp, shaped like a concrete paperclip with one perpendicular flange at your feet. Halfway up, nod at the guard who keeps commoners out of the skyboxes. Make your next turn and, at the final bend, look west at Chicago's mundane skyline of houses, churches, factories and warehouses, the ancestral home of North Side Cubs fans. Turn around to finish your ascent past the beer stand -- conveniently located, for men, next to the men's room. It used to be an Old Style stand, but Budweiser sponsorship the past few years put an end to that local beer tradition and left a sorry state of suds selection at the ballpark.

Now you're in section 416. The usher -- Michael or Leo, maybe, though you never know who'll be there since John retired -- might ask to see your ticket. Leo keeps baseball cards on hand as a personal promotional item, and if you're a fan of the visiting team or accompanied by one, he'll give you both a card themed to that day's opponent.

"The hype for the Cubs this year is higher than their run differential, a crazy number that reads like votes stolen per precinct by former Chicago mayor Richard J. Daley's old Democratic machine."

Nice to meet you. Who am I? I'm one of those long-suffering, die-hard, lifelong Cubs fans. I'm also a dues-paying (and occasionally publishing) member of the Society for American Baseball Research. I teach courses on baseball literature and film at Northwestern University and the Newberry Library of Chicago. I go to 20 or 25 Cubs games a year, plus I take a minor league road trip, attend spring training and visit the Arizona Fall League. I also watch amateur teams play at McKinley Park at 39th and Western. I even go to White Sox games. Baseball is baseball.

Why am I in 416 today? Because I'm lucky enough to have friends, some of whom you'll soon meet, to share tickets with, and we're persistent enough to never quit.

I've been coming to Cubs games for 46 years, since I was 8 years old. I've sat in the grandstands behind girders and in the front row, where you have to yell "Down in front!" to the opposing team's batters. I've talked ball with pioneering owner and promoter Bill Veeck Jr. in the center-field bleachers and tried to ignore local celebrity "superfan" Ronnie "Woo Woo" Wickers wherever he appears. I've kept score (my own way: swinging strikeouts are a backward K, as far as I'm concerned) and I've seen historic events, such as the Sammy Sosa corked bat game, live and in person, not to mention Game 7 of the NLCS in 2003 and Game 4 of the NLDS in 2015. I've seen the ballpark evolve, with the addition of lights and ads and giant video boards where once there were only ivy and views of the neighborhood two-flats.

Well, those two-flats became mostly rooftop clubs years ago. The nostalgic ship of the "pure" Wrigley experience has long since sailed, but the new joint looks pretty good nonetheless.

Why I am here in this column? To document what it's like to be a Cubs fan in 2016. The stories you'll hear will be personal, informed by baseball history and literature, and will extend beyond the Friendly Confines of Wrigley Field to address the neighborhood, the city and, with luck, the Republic.

No pressure here, but Vegas has the Cubs as a mortal lock to win the World Series. Now is the time to jump on the bandwagon.