THE CIRCLE IS perfect. Like a target. Or the Cubs' logo, which, come to think of it, looks like a target.

The crowded diagram, drawn on Joe Maddon's iPad, embodies the talk the manager gave to the Cubs on Feb. 24, the first full day of spring training in Mesa, Arizona. The handwriting is striking -- "the product of a Hazleton, Pennsylvania, Catholic school education," he says -- and so is the arrow that pierces the circle, with feathers looking like the seams of a baseball and an arrowhead that could very well be a hell-bent trip around the bases. The method to the madness can be seen scribbled at the very top: Pressure [Is] a Motivator, a Positive, an Indicator You Are in the Right Place.

The circle might also stand for the sun that has been shining on the Cubs this season. With the exception of one day, April 8, when they trailed the 4-0 Pirates by one game, Chicago has been on the north side of the NL Central standings.

Winning is nothing new for Maddon's Cubs: They made it to the NLCS last year in his first season at the helm, only to be swept by the Mets. But heading into the final three weeks of the season, they were on pace to win 104 games, which would be their highest regular-season total since 1910, which is two years after they won their last ... all right, we won't mention it.

What's most fascinating is what Maddon wrote inside and around the circle. Almost everything seems prescient now, which is one reason the glyph has become a popular fan T-shirt made and sold by Korked Baseball-emblazoned with horn-rimmed glasses on the front, diagram on the back. (A significant portion of the proceeds go to Maddon's Respect 90 Foundation.)

As starting pitcher Kyle Hendricks listened to Maddon's talk that day in February, he was transported back to Dartmouth College, where he was an economics major. "It really was like being in a really cool class with a really cool professor," Hendricks says. "I'm not sure I totally understood everything he was saying, but we all walked out of there with smiles on our faces. We were ready to embrace the target."

It was that circle, and the messages inside and orbiting it, that set the stage for this season. 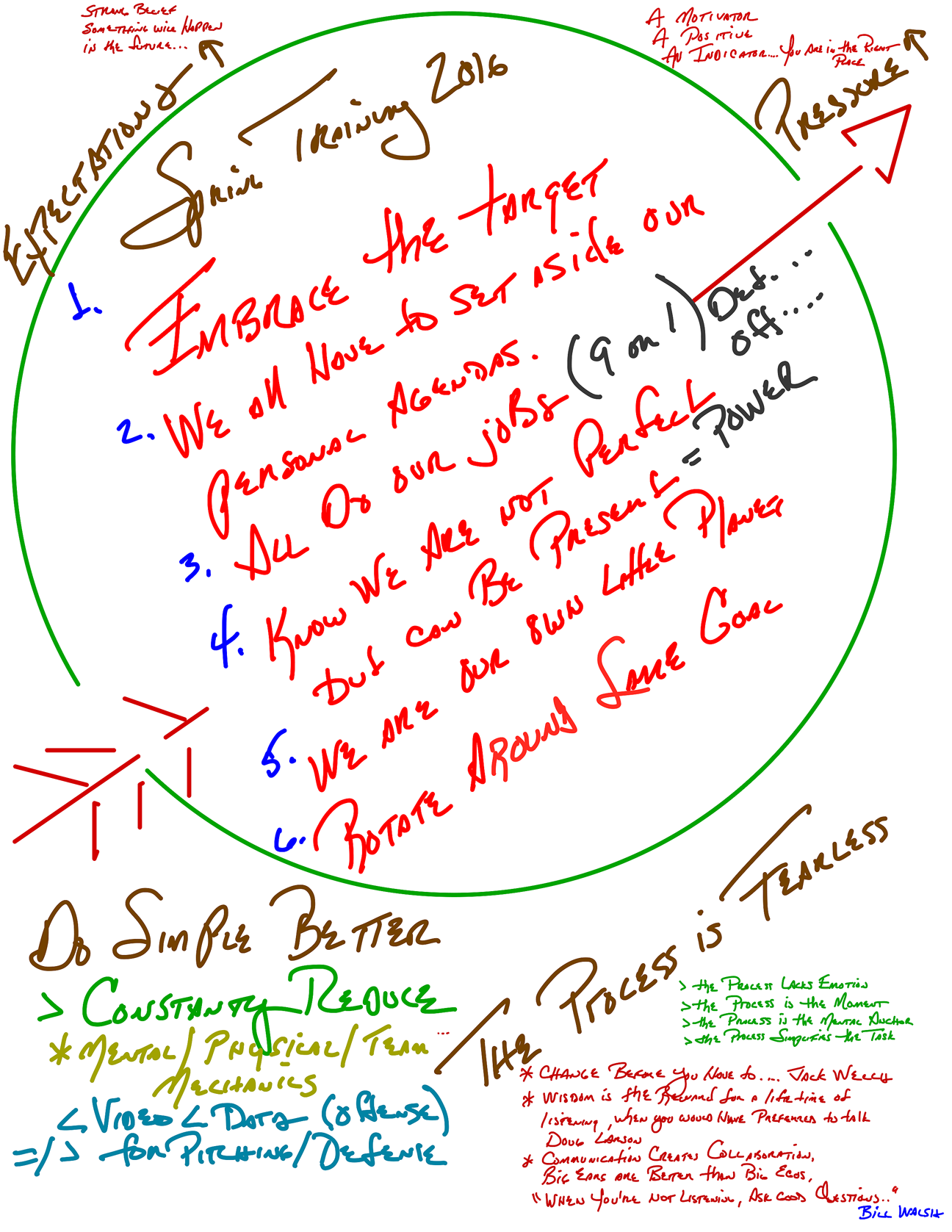 Maddon first began formulating his message back at baseball's winter meetings last December, after the Cubs had acquired outfielder Jason Heyward, second baseman Ben Zobrist and starter John Lackey. "They have that media scrum for managers," Maddon says, "and everybody is talking about the pressure and the expectations, that we were the team to beat, and I thought, 'Well, we better embrace our position rather than run away from it.'" At the time, he also checked out a book from the substantial library in his head: Tom Clancy's Clear and Present Danger. "There's a scene when the president's spin doctors are telling him he has to distance himself from his friend who was killed by a drug cartel. But the hero, Jack Ryan, steps in and says, 'No, Mr. President. Not only was he your friend, he was your best friend, and you have to address it.' Sometimes it's better to run toward the fire."

It almost goes without saying that there is a second meaning to "target" for the Cubs. Maddon wants them to relish their status as the bull's-eye for the other NL teams. With that confidence, they might better be able to hit what they're aiming for: a championship. Just don't think about the enormity of ending 108 years of frustration.

"With all due respect to our faithful fans," he says, "I will not get caught up in that 1908 stuff. I wasn't here for all the years of pain, and neither were any of my players or coaches. It's a big enough target as it is. This is about now, not then."

2. We All Have to Set Aside Our Personal Agendas

There is one thing that Maddon always writes on his otherwise unpredictable lineup cards: DNBAFF. That's his reminder to set aside his own biases. "Do not be a f---ing fan," he says. "You can get caught up in the game, just like everybody else in the park. But I can't play favorites and hope this guy gets a hit or that guy gets an out. I have to make decisions based on data and common sense. I have to manage every game to win."

The trademark of Maddon's Rays (he managed them from 2006 to 2014) and Cubs has been flexibility, meaning players are often asked to think more about the team and less about themselves. That came into play right away on April 7, when highly touted outfielder/catcher Kyle Schwarber was lost for the season because of an ACL injury he suffered in an outfield collision with center fielder Dexter Fowler.

Fortunately, the Cubs have Kris Bryant, who has played third base, first base, shortstop and all three outfield positions; Zobrist, who plays in the outfield when he's not at second base; and Javier Baez, who's played everywhere but pitcher and catcher. There's no certainty in a Maddon lineup.

This goes hand in hand with No. 2. "Your position may change, or you might be called on to start when you've been sitting on the bench for a week," Maddon says. "That '9 on 1' in parentheses [on the whiteboard] is to remind them that defense is very much a team effort and offense is one against nine."

Baez, of course, has taken the utility player description to a new level. On offense, the 23-year-old free swinger had 13 homers, 50 RBIs and a .271 batting average through Sept. 12, and on defense, Maddon says, "he's a game changer." Indeed, the Cubs would not lead the majors in defensive runs saved without the 17 Baez has provided -- 11 at second, four at short and two at third. Nobody in baseball is quicker with a tag.

Baez is also indirectly responsible for the saying that inspired the most popular Maddon T-shirt: At the Cubs convention in January, Baez told the audience of the jocular advice Joe gave him when he joined the team last year: "Try not to suck."

4. Know We Are Not Perfect but Can Be Present

"I don't want anyone to ever go [on the field] afraid to make a physical mistake because that will lead to a mental mistake," Maddon says.

In baseball, somebody can find fault with anybody: Cy Young Award winner Jake Arrieta was stuck in the Orioles' minor league system when the Cubs acquired him in 2013. Free agent Dexter Fowler happily returned to the club in February after getting the runaround from the O's. Rookie sensation Willson Contreras was on nobody's radar his first six years in the Cubs organization. Jon Lester is having the best season of his career, so who really cares if he's reluctant to throw to first base?

Tommy La Stella, a versatile left-handed hitter, was forced to face criticism and disappointment in mid-August when the club sent him down. When he responded by not reporting, Maddon was understanding: "I was young once and reading Kurt Vonnegut, so I kind of know what he's going through. We'll just give him his space."

After a week of reflection, La Stella decided to report to Double-A. Now he's back with the big club, providing a left-handed bat off the bench.

5. We Are Our Own Little Planet and 6. Rotate Around Same Goal

The Cubs bought into these dual concepts from the start. "We have this remarkable blend of experience and youth," Maddon says of the clubhouse atmosphere. "The older guys watch out for the younger guys. They can be hard on them when they do something wrong, but they're the first ones out of the dugout when they do something right."

It's interesting to note that of the four Cubs the fans voted to start in the infield for the All-Star Game, first baseman Anthony Rizzo and second baseman Zobrist, the right side, were proven veterans; shortstop Addison Russell and third baseman Bryant, the left side, were sophomores.

Yet the emergence of Contreras at catcher best embodies the one-world philosophy on Planet Cubs. "The kid has been great," Maddon says. "But it's not just about him. It's about David Ross and Miguel Montero taking him under their wing and helping him even though it may mean fewer at-bats for them."

BELOW THE CIRCLE, the manager laid out two of his other tenets:

Maddon wants his players to reduce the game to its essence. That's why he holds an annual American Legion Week in mid-August, letting the players arrive at the ballpark later than usual to remind them of the days when they just got out of their car and played Legion ball. It's all part of Maddon's belief that for all the benefits that video and data have brought to pitching and defense, they can work to constrict a hitter who thinks too much. If you had Kris Bryant, wouldn't you want him to do what comes naturally?

The Process Is Fearless

This is something Maddon freely admits that he borrowed from legendary NFL assistant coach Tom Moore, whose philosophy is that if you concentrate on the little things, you'll eventually arrive at the Big Thing. There are four little definitions underneath the header to explain The Process -- it lacks emotions, it's the moment, it's the mental anchor, it simplifies the task. Case in point: On Aug. 10, the Cubs were holding a 2-0 lead over the Angels in the top of the eighth inning when rookie reliever C.J. Edwards was called on to face the heart of the order -- Mike Trout, Albert Pujols, Andrelton Simmons -- with runners on second and third. He struck out Trout and got Pujols and Simmons to ground out. Asked after the Cubs' 3-1 victory whether he was worried about facing Trout and Pujols in that situation, Edwards simplified to concentrate on making the right pitch. "I just pulled my hat down more so I don't see their faces," he said.

BY MAY 8, the Cubs were three games up on the '27 Yankees, but they couldn't quite sustain their hot start. As they headed into a brutal part of their schedule before the All-Star break, they became the target that Maddon had warned they would.

Chicago Sun-Times columnist Rick Telander pushed the panic button, suggesting on July 8 that Maddon's shtick might be wearing thin. It was "time to right the ship, Joe," he wrote.

Maddon stayed the course. He usually addresses the troops three times a year -- spring training, midway through the season and before the postseason. As it happens, he chose that very day -- a Friday when the team was about to start a three-game series in Pittsburgh -- to call a meeting.

He came full circle, handing out new copies of the talk he had given back in February. Says Zobrist, "It was his way of reminding us that this is still a very good team and that we needed to stay on target. Not just for a division title, not just to win the NLCS and get to the World Series. The real target is to win the last game of the season."