CHICAGO -- Greg Maddux was the Opening Day starter in his Braves debut when he beat his former team in Chicago in April of 1993. Cubs fan Dan Lepse remembers it well.

Lepse also recalls it was the day he proposed under the Wrigley Field marquee to his future wife Tricia, who immediately ran for the bathroom because it was the only place that had heat.

"The first person she told we were engaged was the bathroom attendant," he said.

Ah, the Cub fan. Much has been said, mocked and dissected in regard to this unique species. Motivated by a deep, often familial and civic loyalty, energized by unbridled and childlike optimism and distinguished by a gnawing and perpetual state of angst, Cubs fans may resemble those from other cities and towns, but it's the rare combination of these traits that sets them apart.

Psychiatrist and lifelong Cubs devotee Neal Spira would not go so far as to mix business and pleasure and say Cubs fans are a textbook example of any particular psychosis.

"No, no, not textbook," Spira said. "Maybe a paper, though. You could definitely write a paper about the psychology of the Cubs fan."

Dr. Leo Weinstein, Spira's colleague at the Chicago Institute for Psychoanalysis, goes back to a central theme of psychotherapy in probing Cubs fans, and the theory that unconscious childhood feelings get expressed in adulthood.

"It taps into this feeling a lot of us have that things should be fair, that people should take turns and it's our turn to win," he said. "It also taps into the idea a lot of us believe subconsciously that if you suffer enough, you'll be rewarded.

"Cubs fans have suffered for 108 years, so it only makes sense we'll be rewarded -- not because our team is good or that Theo Epstein and the front office have assembled a winning team, but because it's right. And when [that] turns out not to be true, we're upset. People have a hard time giving up that feeling ... but it's a problematic way to live your life."

Dan Lepse laughs at the prognosis but doesn't altogether dispute it. 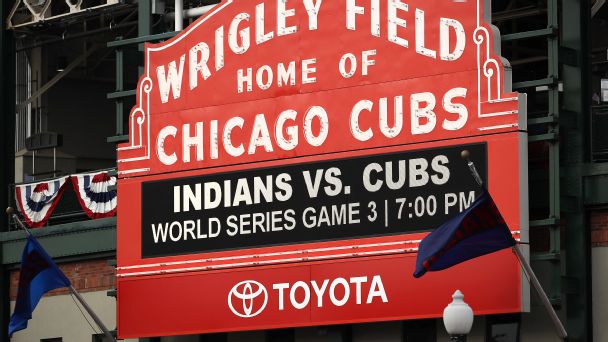 I'm writing to inform you of some serious health news that will keep me out of the office for the next few days. I have contracted the Blue Flu (also referred to in some medical circles as Fall Classic Fever.) This is a rare condition and the recent outbreak is the largest on record since 1945. This fever has the potential to reach the same epic proportions as the Great Pandemic of 1908.

There is only one facility capable of properly treating this affliction, the Friendly Confines Clinic in Wrigleyville. So I will be traveling to Chicago for intensive treatments this weekend. I'll be in the capable hands of two experts in the field, named Epstein and Maddon, who both have experience dealing with this condition.

Please say a prayer for me, and also for the team at the Friendly Confines, as we are hoping for a successful outcome.

Lepse is a resident of Seattle, and he became a Cubs fan for life at age 8, when his father took him on a Midwestern baseball swing after their hometown Pilots moved to Milwaukee. On their trip to Wrigley, Seattle native Ron Santo hit a home run, Fergie Jenkins earned the win and a little boy fell in love.

This year, Dan and Tricia celebrated their "Sandberg anniversary," or in laymen's terms, their 23rd. (Ryne Sandberg played as a second baseman for the Cubs and wore No. 23.)

In addition to remembering the 40-degree temperatures and the wind whipping off the lake on that day in April '93, Dan also remembers his wife being "none too happy with the amount of time she had to wait [for the proposal].

"But I guess that was the Cubs fan in me," he said. "Always leave 'em wanting more."

The couple have three daughters: Sammy (after Sosa), Kerry (after Wood) and Addison (after the street bordering Wrigley). Dan has a Wrigley Field turnstile in his house.

And when Lepse interviewed for his current job of sports information director at Seattle Pacific University eight years ago, he told them if the Cubs made the World Series, he would need to take that week off.

Lepse would buy a ticket and go see the Cubs by himself during summer visits to his brother in Chicago.

"I have seen so many things in that ballpark that should have driven me away, things major leaguers should never do, the bad baseball you encountered seeing the Cubs at Wrigley for any number of years," Lepse said. "I've left the park really frustrated. But there's something about going to see a win, even if your team [is] in last place. That's uplifting. It's not a lost cause."

Psychologist and "happiness researcher" Stephen Schueller likened the addiction and devotion Cubs fans have to their team to learned helplessness.

"As things replay over and over, it's easy to rationalize away a one-year thing," said Schueller, assistant professor of preventive medicine at Northwestern. "You fail so often, you feel there's nothing you can do.

"You're doomed to fail because you're a Cubs fan. It's a little sad. But I'm an optimistic person, so I hope they win and break the curse."

Of course, they already have broken the one that extends 71 years, the last time the team reached the World Series, which comes into some conflict with Schueller's study of happiness.

"Happiness is based on low expectations," he explained. "When you have high expectations, a lot has to be delivered to get emotional. The Cubs were always that team you didn't expect to make it. ... But this year, they were a team of destiny and started out the season on such a historic pace, so fans had really high expectations, and that's really dangerous as far as one's emotional impact."

A World Series loss could be very tough to take.

"It will be really hard on people, depending on how it goes," Spira said. "If they really fold, I think people will be destroyed. If they go for it, people could feel good about it."

It's inconceivable to some that the Cubs' traditional cry of "Wait 'til next year" would take on a whole new meaning if they win the World Series. In the meantime, that long lost child in every Cubs fan can do little but wait.

"It has been 108 years [since the Cubs last won the World Series], so it's long overdue," Weinstein said. "For that reason, the thinking goes, we will win. The world's magical forces will make the world just.

"Every year, we're just waiting for justice to occur."