Baseball's greatest fun fact was born in three stages: on the last day of the first half of the 2004 season, on the last day of the 2004 season and, many years later, when a young man was kicking stones along the river bank and discovered it half-buried by mud and shrubs. It is one part record, one part curiosity and one part magic trick. Fittingly, it concerns Barry Bonds, and as a scholar of Barry Bonds fun facts, it is my opinion that it will never be topped. 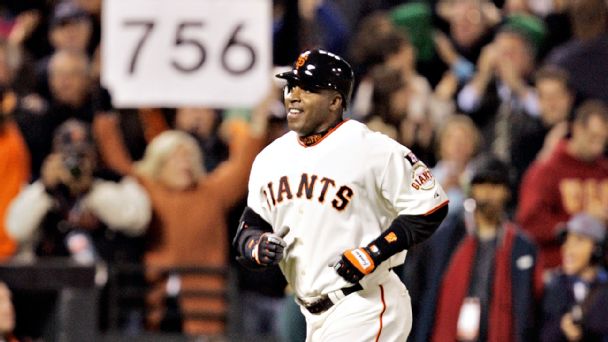 That's the highest first-half OPS a batter has ever had. The second best first-half OPS ever is 60 points lower, produced by Babe Ruth 96 years ago; it's followed by two more Babe Ruth performances and another Barry Bonds first half. There are all sorts of incredible ways of viewing what Bonds had done in 77 first-half games that season: He had 131 walks, a first-half figure only three batters -- Jose Bautista, Joey Votto (twice) and Bonds again -- have topped in a full season since. He had 71 first-half intentional walks, which is 26 more than any non-Bonds hitter has ever produced in a full season, before or since. His on-base percentage was .628, which is 158 points higher than any non-Bonds has produced in a full season since, and more than 70 points higher than the all-time non-Bonds record for a full season. There is always a best player in baseball, but Bonds at the time lived outside those rankings, because what he was doing wasn't baseball. Teams refused to engage, in a way that had no precedent and would have no sequel.

Jordan Shusterman, of Cespedes Family Barbecue, once pointed out that, in one sense, the most impressive fun facts aren't actually the most fun. The most impressive Barry Bonds fun fact, he pointed out, is that he hit more home runs than anybody in history, but that's not exactly fun; it's just a fact. In the same way, the most impressive fun fact of the first half of Barry Bonds' 2004 season is that he had the highest first-half OPS in history, and that he set the record by a lot. Sixty points of OPS is the difference between Anthony Rizzo last year and Jean Segura. It's the difference between Eric Hosmer last year and Jordy Mercer, between Brian Dozier and Jonathan Villar. That's how much better Barry Bonds was than Babe Ruth in Ruth's best first half ever, who was himself better than any hitter in history. Nobody had ever been better than Bonds, and nobody had ever been close. That's fun, but I've seen funner.

The Turn
The Giants' second half began in Coors Field, and it began as it had ended. Bonds drew three intentional walks in the first game of the second half, and singled. It went more or less like that for two and a half more months, with Bonds walking seven times in 10 plate appearances in the season-ending series against the Dodgers. In the third inning of a meaningless Game 162, he walked on four unintentional balls. An inning later he was replaced for defense. His OPS for the second half was 1.421!

The same as it was in the first half!

Of the 300 best first-halves in history (by OPS), only two players have ever produced exactly the same OPS in the second half: Bonds, and Norm Cash in 1961. There are two easy explanations for the rarity of this achievement. The first is that players who were that good in the first half were most likely performing at the upper level of their true talent, and were due for regression. (Indeed, 253 of the 300 had a lower OPS in the second half, along with one who got hurt and didn't play in the second half.) The second is that there are a lot of numbers -- especially for a stat that is expressed to the thousandth -- and the odds are overwhelming that you'll land on a different one. Even if it's close, you'll land on a different one.

So what does it say when Bonds lands on exactly the same number twice? Consider two records that were once held by Billy Mitchell: The most points in a game of Pac-Man (3,333,360) and the most points in a game of Donkey Kong (874,300). Now, you probably don't know anything about those numbers except that, as records, they were the highest ever recorded. But if I tell you that, sometime not much later, there was another game of 3,333,360, and then another, and then another -- exactly 3,333,360, not one point more or less -- you would probably deduce that 3,333,360 isn't just the highest game ever but the highest game possible. The coincidence of multiple players landing on exactly that precise number would be too great; there must, then, be some artificial limit on how many points can be gained. As, in fact, there is: At 3,333,360, Pac-Man crashes. The record isn't just a record but an actual and theoretical maximum. It's perfection.

Meanwhile, Mitchell's Donkey Kong record would be topped, again and again, by himself and by later players. It was the best ever, at the time, but it was still flawed. It could still be improved upon.

By repeating exactly 1.421, it feels like Barry Bonds has proven the existence of a maximum. It can't be an accident, the brain thinks. It's too unlikely. It's too precise. We know logically that this isn't true -- we know that, certainly, Bonds could have doubled instead of walked in his final at-bat and lifted his second-half OPS a few points higher -- but this is a coincidence so unlikely that it feels like there must be some intelligent design behind it.

And there really was something automatic about Barry Bonds in 2004. You'd watch Giants games and count how many batters were left until he'd bat, because you knew exactly what was going to happen when he did. His season wasn't just incredible. It was perfection. I saw it. And 1.421/1.421 is the proof.

A record is usually one data point: a total that is higher than any previous data point. A fun fact, though, almost always turns on two numbers, or two facts, or two details, put against each other in a way that surprises, illuminates, or stuns. One number draws extra meaning from its relationship to another, so a new truth emerges. In this case, the truth that emerges is that Barry Bonds was not just otherworldly, but he was so finely calibrated that he reached exactly this extraordinary peak, on the button, twice. Or that Barry Bonds was not just otherworldly, but literally maxed out what a baseball hitter can do. There's not one point more possible.

The Prestige
I swear that what you are about to see is real. It is not a trick. I have changed nothing. This is real.

He got one point more. Somehow.

How is this possible? I've been struggling with this question for years. Initially, I just assumed that Baseball-Reference was rounding the season totals but not the first- and second-half splits. But we can take these figures out to way too many digits and see this isn't the case:

All the rounding is done, consistently and appropriately, and his seasonal OPS remains higher than in either half alone. Think about this. Think about it for a long time. This should not be possible! How is this possible?

If you don't want to see where the slight of hand is -- or if you just want to avoid the math portion of this article -- you can stop now. Walk away whistling, carrying this fun fact with you. Tell your grandchildren about it. Tattoo it on your back.

This is a little complicated, but the bottom line is that the first half and second half will be weighed against each other differently for each stat. His first half represented 53 percent of his plate appearances but only 51 percent of his at-bats.

If Bonds' first and second halves were weighted exactly evenly, for both OBP and SLG, it would be impossible -- literally impossible -- for the OPS to be higher than it was in either half. His OBP would have been .6083, his SLG .8126, his OPS 1.421. But after the All-Star break, the league began to pull back slightly from the always-walk-Bonds strategy. Maybe it was because more teams were falling out of the pennant race. Maybe it was because J.T. Snow, having a sensational season, began to bat behind him in the lineup. Maybe it was idiocy -- Bonds, after all, slugged .832 in the second half, when they tried pitching to him more. But the outcome was magical: His OPS stole an extra point. He had scored 3,333,361 points in Pac-Man.