Is Tim Tebow a major leaguer? According to New York Mets GM Sandy Alderson, the former NFL quarterback is all but bound for the bigs.

"Somebody asked me whether I think he'll be a major league player at some point," Alderson said Sunday. "I think he will play in the major leagues. That's my guess. That's my hope, and to some extent now after a year and a half, a modest expectation."

So, for this exercise, we'll take Alderson at his word and assume Tebow will show up at Citi Field (or elsewhere) in a major league uniform at some point. But when? And for how long?

Will we see Tim Tebow in the majors this season? 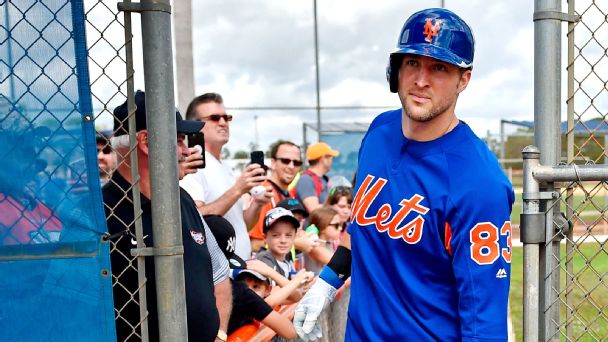 Will Tim Tebow play in the major leagues? Vote at the bottom of the page »

Sam Miller: The premise we're going with today is that we will see him sometime, but man is it hard to see it: Tim Tebow is miles and miles away from being good enough to play in the majors; he will almost certainly never get good enough to make the majors; if he played in the majors, it would be nothing more than a stunt, and Sandy Alderson, his general manager, is not a general manager known for treating official major league baseball games like a stunt.

We can't know why Alderson said he thinks Tebow will make the majors -- note that he used a lot of hedge words: think, guess, hope -- but a reasonable explanation is the Mets want to make a lot of money by having Tebow in big league spring training, and the more seriously they persuade fans to take this, the more money they probably make. That might be a wrong interpretation, but it's certainly more realistic than concluding a guy who hit .226/.309/.347 as a 29-year-old limited-range left fielder in Class-A is going to get good enough to even match those (terrible) numbers in the majors.

Alderson has more than 30 years in the game. He knows a player who hit .226/.309/.347 as a 29-year-old in Class-A is not a major league player or a legitimate prospect. Is Tebow a conventional prospect? No, but the odds are slim to none that he improves enough to warrant a major league promotion.

Which doesn't answer the question. If he gets called it up, it would be in September and nothing more than a publicity stunt to bring in some fans.

Miller: If not this year, probably never -- how much of Tebow's 30s is he really going to invest in being one of the worst players in the low minor leagues? So it probably has to be this year -- let's say September, if the Mets are out of contention. But even if they are, it'll be hard to justify giving a roster spot to Tim Tebow instead of some 25-year-old minor leaguer in the Mets organization who is giving everything he has to someday make it to the majors, and who has to be left off the 40-man and active rosters so Tebow can play. The player whose spot Tebow takes has quite likely been making less than minimum wage for years as a minor leaguer.

Even a month in the majors would be a huge raise for him, almost $100,000 for the month, a life-altering return on his years of hard work, even if he never becomes a big league regular. That's the human cost of letting Tebow pinch-hit a few times.

Worse, it's probably not the case that one Mets minor leaguer will feel the spot was stolen from him; probably dozens will, the same way dozens of frustrated drivers feel a single parking spot was stolen from them when somebody parks a truck sloppily in a crowded lot. The office politics of putting Tebow on a minor league roster are a little bit fraught, but the player the Mets cut so they could employ Tebow is no longer in the organization to complain. But all the players who see Tebow in the majors instead of them will still be there, with the Mets, humiliated and angry, complaining among one another, holding it against their boss.

How will he perform when he comes up?

Schoenfield: Probably not well. If it actually happens, it would be for a few pinch-hitting appearances in blowouts. The only way he starts a game is if the Mets are way out of the playoff race or have clinched the division and are playing a meaningless game the final weekend.

In fact -- they play the Marlins that final weekend. Maybe he'll get to play then.

Miller: Baseball Prospectus' projection for him: .200/.272/.333, with below-average defense in left field. His WAR, in this case, would be around minus-3 wins per year, meaning, over a full season, he'd be about three wins worse than the Mets' minor leaguer he got promoted ahead of.

We're supposed to have faith he's still learning the game and has room to grow that will outpace the aging of his body, and in theory he does. But he also hit .170/.236/.214 in his final 30 games last season at High-A, where the average pitcher is 23 years old and will never make the majors.

How long will he last?

Schoenfield: Other than using up a 40-man roster spot, it's harmless enough to keep him around the rest of the month.

Miller: Well, unless some crazy unexpected things happen between now and his debut, it'll already be obvious to everybody he's not as good as major league baseball players, so there will be no surprise when he's terrible. If "he's terrible" is baked into the experiment, then "he's terrible" won't be a reason to send him down or for him to quit. Presumably, then, it will last until shame or criticism makes it too unpleasant for the Mets or Tebow.

If he comes up in September, he probably makes it to the end of the season, then everybody snaps back to reality in the offseason. I don't know what would otherwise drive somebody to fail in front of millions of people.

In the end, how will MLB historians of the future view his career?

Schoenfield: Well, let's see. Something like this (the complete list of players to compete in both the NFL and MLB since 1970):

There's actually an argument for Jordan as the best two-way MLB/NFL star. He was a much better baseball player than Jackson or Sanders (he had 32.8 career WAR) and started 30 games at safety in three NFL seasons, and was good enough to be a Pro Bowl alternate. Deion is an NFL Hall of Famer, however, so he ranks first. Maybe if Bo had stayed healthy ...

Miller: As a Mets money grab, slightly more dignified but far less charming than the Eddie Gaedel stunt. Tebow seems like a genuinely very nice guy, a human being worth rooting for, and his playing in the minors has some definite charm.

Unless he gets much better than he is now, that charm will entirely evaporate if he starts taking swings in major league games.