It's New Clothes Week. Andrew McCutchen and Evan Longoria and Giancarlo Stanton, all traded this winter, showed up to spring training for their new clothes. J.D. Martinez and Eric Hosmer and Yu Darvish, just days after signing long-term contracts in brand-new cities, reported for their new clothes. Corey Dickerson and Steven Souza Jr. and Jake Odorizzi, scattered about the continent this week after the Rays' sudden budget cuts, will be handed new clothes and told that the name on the front of those clothes is the most important name on any clothes.

There's a famous comedy routine about this, of course. "It's different guys every year," Jerry Seinfeld observed. "You're rooting for clothes, when you get right down to it. We're screaming about laundry." It was the early 1990s when Seinfeld told that joke, about 15 years after baseball players got free agency, barely five after the NBA allowed unrestricted free agency, hardly a year after modern free agency took effect in the NFL. Free agency was novel and scary, players were changing teams as they never had before, mega-rich owners were whining about how they'd soon be destitute if they had to pay their free agents to stay. Given that context, I always took the joke to be a barb aimed at players -- disloyal! -- or owners -- too cheap! -- who were only pretending to believe in the sacredness of The Team.

There's no other way around it. Say you have your favorite team, 25 players on the active roster, all contributing something to an effort you are fully, emotionally committed to. Call them the 2017 Astros or the 2017 Dodgers or the 2017 Phillies. You love that group, just as you loved them one year earlier. But of those 25 players, only (on average) 15 were on the active roster at the start of 2016. A little more than 40 percent of the team turns over from the start of one year to the end of the next.

We, as fans, mostly don't flinch at this radical turnover. Some might feel stung, but we roll with almost half the team turning into brand-new people. We don't think about the 2017 Dodgers as a fundamentally new team.

Go back one year earlier, to the start of the 2015 season, and now it's fewer than 10 of the 25 players who were there. In just two offseasons, more than half of a team turns over. If you think a team is a collection of players, then in just over two years, a team is more dislike itself than it is like itself. Again, we don't flinch. Almost nobody changes which team they root for in the face of such turnover.

Now, some of the 2017 players were in the team's minor league system in the prior years, so maybe you don't want to count that as turnover. But even among major leaguers who stayed in the major leagues, a third of all players have changed teams between the start of one season and the conclusion of the next, about half have over the course of two winters, and nearly 70 percent of steady major leaguers changed teams between April 2013 and September 2017.

Yes, some left on their own, to take more money from an owner who valued them more. Maybe you would call that disloyal. But in most cases, a player is traded against his wishes, and in most of those cases, you keep on rooting for the clothes he wore instead of him. When he comes back to face his old clothes, you hope he'll fail. You (and by "you," I mean "I") have no loyalty to him at all.

Do not be ashamed. This is why we, baseball fans, are great, and this is why baseball works. 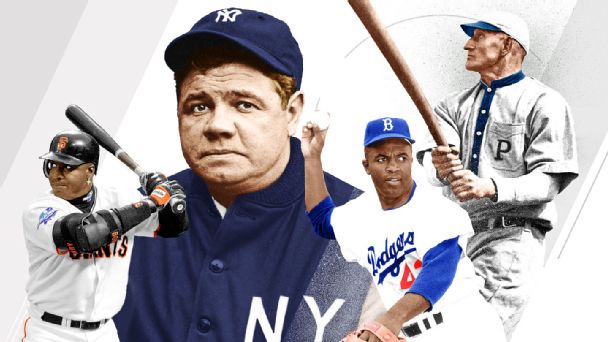 Sam Miller looks back through the lens of history at the stories, teams, players and plays that made the biggest mark on MLB in each season since 1903. The list »

Because by the second week of this season, Royals fans will be fully, emotionally committed to Hosmer's replacement at first base. They will cheer as hard when he does something well as they did for Hosmer. Meanwhile, Padres fans will cheer as hard when Hosmer does something well as Royals fans ever did. By the second week of the season (at the latest), Giants fans will love McCutchen and Longoria, and Yankees fans will love Stanton, but also, Rays fans will love C.J. Cron, Rangers fans will love Mike Minor, Mets fans will love Adrian Gonzalez and Royals fans will love Wily Peralta. The day-in, day-out relationship between fan and player will grow passionate almost immediately, such that there are virtually no strangers in baseball cities. The new sixth reliever in the bullpen will be some local kid's favorite player for some undefined reason; the new No. 5 starter will delight everybody by pitching like almost a No. 4 starter; the new rookies will all be assumed to have far more "potential" than they really have; and the new journeyman corner outfielder will stay one forgettable year, yet that forgettable year will somehow nevertheless sear into fans' memories for a particular hot streak or a walk-off homer or the bumper read he does for the radio broadcasts. Fifteen years later, he'll be coaching first base for the club. We aren't what you'd call loyal because we're radically open.

Player movement is inevitable, and it is, mostly, for the players' good. Free agency is for their good, of course, but even trades -- even teams putting players on waivers or outright releasing them -- help funnel players into opportunities and organizations where they will thrive, where there is plenty of playing time, where there are coaches who believe in them and where their best years might coincide with pennant races. Not every trade is good for the player, but on balance, a sport in which players didn't move around a lot would be very bad for its athletes.

The only thing that makes a sport in which players move around a lot possible is our disloyalty. Once a player leaves, we're finished with him. But only because we have to make room in our hearts to love, almost unconditionally, the one who replaces him -- and because we know he'll be well taken care of by his new city.

We are loyal to clothes. It's not a joke. It's why this works.