WASHINGTON -- Blake Snell knows what it's like to perform in front of small crowds in a national-publicity vacuum -- just like David Price, James Shields and all the other successful pitchers who preceded him in Tampa Bay. Rays superfan Dick Vitale has some amazing lung power and enthusiasm, but he can do only so much on Twitter to champion his beloved team and its individual achievements.

So it was no great surprise when Snell failed to crack the top five in recent player balloting and fell short of making the American League All-Star team on selection Sunday. Anonymity comes with the territory.

Then a funny thing happened: Fans and media members started ranting about the injustice of Snell's exclusion from the team. Rays pitcher Chris Archer lectured his peers on the importance of "due diligence,'' and even New York Giants wide receiver Odell Beckham Jr. entered the fray.

By the time Snell was added to the AL roster as an injury replacement Friday, he felt more love as a cause célèbre/snub than he ever did baffling hitters with his fastball, curveball, slider and changeup.

"It was cool to see that people cared so much and wanted to see me perform with the best,'' Snell said Monday at the MLB All-Star Game media day. "It meant a lot to me. So many people reached out that I didn't even know were paying attention. Tampa is a small market, and I don't feel a lot of people are really watching us. I was upset, but to see so many other people get upset about it made it a little easier to take.''

This is the modern-day starter's lot in life: Post a 2.09 ERA in your first 19 starts while pitching in the toughest division in baseball, and you still have to wait five days for Corey Kluber to get an injection in his knee to make the All-Star squad.

The rosters for Tuesday's All-Star Game at Nationals Park are stacked with pitching to the point of overflowing. Justin Verlander, a father-to-be, is still cranking out mid-90s heat at age 35. Max Scherzer is making a run at his fourth Cy Young Award. Jacob deGrom has a 1.68 ERA at the break and isn't even the NL's All-Star starter. Chris Sale is averaging 13.12 strikeouts per nine innings. Kluber has 132 whiffs and 17 walks this season. Luis Severino is a bona fide breakout star. And Gerrit Cole and Trevor Bauer are doing UCLA proud, even if it's doubtful they'll spend much time reminiscing over the good old Westwood days in the American League clubhouse this week.

"I think pitchers are better than ever right now. There are players from back in the day who say the game was better then than it is now. But the talent that's out there right now is stupid-crazy. You see guys now throwing 100, snapping breaking balls and throwing good changeups in hitters' counts." David Ortiz, on pitchers in today's game

Just think about the pitchers who didn't make the All-Star team. Colorado's Kyle Freeland has a 2.76 ERA at Coors Field and is limiting hitters to a .223 batting average at home, and he was barely in the discussion. Tyler Skaggs, who posted a 0.84 ERA in June and has emerged as a front-of-the-rotation starter in Anaheim, was another afterthought. Adam Ottavino, Dellin Betances, Kyle Barraclough, Kirby Yates, Collin McHugh, Jose Leclerc and Lou Trivino are among a slew of relievers with outrageously good numbers who were squeezed out by the numbers game.

Stack all those arms on top of one another and mix in some defensive shifts, diligent scouting reports and startlingly high radar gun readings and the pendulum has shifted dramatically toward run prevention over run production.

"I think pitchers are better than ever right now,'' said David Ortiz, who managed the World Team in the All-Star Futures Game on Sunday. "There are players from back in the day who say the game was better then than it is now. But the talent that's out there right now is stupid-crazy. You see guys now throwing 100, snapping breaking balls and throwing good changeups in hitters' counts.

"We have great talent in the game right now. What I'm seeing might be the best I've seen. Competing against that, it's hard to hit.''

• Major League Baseball's 30 teams are on track to set a new strikeout record for the 11th straight year. Hitters are striking out an average of 8.5 times per team each game, eclipsing the previous high of 8.25 last season.

• The current MLB-wide batting average of .247 would be the lowest since the .244 mark of 1972. It's the lowest in a non-strike-shortened year since 1968, when Bob Gibson posted a 1.12 ERA, Carl Yastrzemski won an AL batting title at .301 and baseball's cumulative batting average was .237. MLB responded by lowering the mound from 15 to 10 inches to give hitters a fighting chance.

• Before this season, MLB had never experienced a month with more strikeouts than hits. It has already happened twice -- in April and June -- and the 30 clubs hit the break with an average of 8.5 strikeouts and 8.42 hits per game. The White Sox, Rangers, Padres and first-place Phillies all have more than 900 strikeouts and fewer than 800 hits at the break.

• There have been 34 no-hit bids of six innings or more this season. Last year, there were 24 for the entire season.

• Velocity is creeping up to previously unimaginable heights. According to FanGraphs data, 23 MLB starters throw their fastball an average of 95 mph or better. Ten years ago, only six starters cleared that barrier. In 2008, the Marlins' Matt Lindstrom was the game's hardest-throwing reliever, with an average fastball of 96.9 mph. This year, 16 relievers are averaging 97 or better, and the Cardinals' Jordan Hicks is throwing his fastball an average of 100.2 mph.

"That's the evolution of the bullpen,'' Scherzer said. "You have whole bullpens stocked with guys who can throw the heck out of the baseball for an inning or two. To me, that's where the greatest change has taken place in the game. It's not just about throwing 100 mph fastballs. These guys have off-speed pitches that hitters have to be cognizant of, and they can throw multiple pitches for strikes. That makes hitting real tough.''

As MLB's competition committee debates potential changes to defensive shifts, hitters continue to grapple with ways to counteract those demoralizing defensive alignments. Do they go over the shift, slap the ball the other way or lay down the occasional bunt to plant a seed of doubt in the minds of infield defenders? Amid spiraling strikeout totals, even hitters who pride themselves on contact have grown accustomed to forlorn walks back to the dugout.

Cardinals third baseman Matt Carpenter is a prime example. In 2013, he whiffed 98 times in 717 plate appearances. He spiked to 151 in 665 plate appearance two years later and is on his way to triple-digit strikeouts for the fifth straight season.

"When people say hitters don't care about striking out, that's just not true,'' Carpenter said. "If anybody is the poster child for that, it's me, I really, really try not to strike out, whether people want to believe that or not. But I like to see a lot of pitches, and if you hit like that in this day and age, you're going to strike out.

"I've never changed my approach and my strikeouts have gone up every year. It's not because I'm doing anything differently. The pitchers are just continually getting better. Teams are paying guys who have high spin rates and get lots of swings and misses. That's what everyone is looking for now.''

Certain positions have become offensive wastelands. The American League first-base crop isn't nearly up to its historical standards, and Tampa Bay's Wilson Ramos was the only AL catcher with All-Star-worthy numbers this season. Now Ramos is on the DL and has ceded the starting spot to Kansas City's Salvador Perez, who brings a .221 batting average and a .259 on-base percentage into the break. 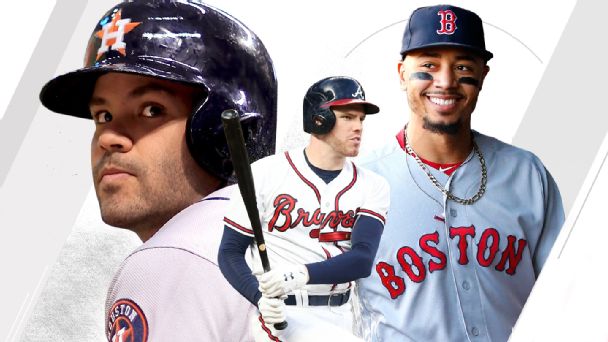 The National League outfield is in a state of disrepair: Matt Kemp leads the pack with an .882 OPS, and fellow oldie but goodie Nick Markakis is next in line at .877. The last time the NL went an entire season without an outfielder logging an OPS of .900 or better was in 1986, when Tim Raines led the pack at .889.

At ballparks throughout games every night, hitters and hitting coaches wrack their brains for an antidote. But for every calculation or adjustment they make, pitchers make a corresponding move to maintain the advantage.

"Baseball goes in cycles,'' Arizona hitting coach Dave Magadan said. "When guys tried to hit the ball in the air more, there was a lot of thinking behind that. But all this data and information is given to pitching coaches and the pitchers, too. They know what guys swing through and have trouble with. That information is a lot more helpful to them than it is to the hitters, because the pitcher has the ball in his hand and he controls everything.

"It's getting worse every year. We talk as much as we can about how pitchers will attack our hitters, but it's become tougher and tougher for some guys to make that adjustment. Guys are willing to punch out three or four times in a game to reap the benefits of that one at-bat where they hit a two- or three-run homer to help you win a game. Unfortunately, you're getting lineups with eight guys like that. When I look at the stat sheet of teams we're playing and I see somebody with a close amount of walks and strikeouts, I'm like, 'Whoa.' It really stands out.''

With attendance lagging in numerous markets, MLB is naturally concerned about the impact on fan interest. But all that dead time and the war on ground ball singles can't obscure all the good things taking place in the game this season. The Red Sox and Yankees, those marquee AL East juggernauts, are on a collision course for an epic division race. The NL pennant race is shaping up to be a mad scramble. And Mike Trout, Mookie Betts, Aaron Judge, Manny Machado and Francisco Lindor are among the young offensive stars who are consistently worth the price of admission.

But in the big picture, pitching reigns supreme, and you won't find many people who expect the pendulum to shift anytime soon. Blake Snell would be wise to take a deep breath and bask in the glow of that introductory cap tip Tuesday night. Those All-Star Game pitching spots are getting more precious every year.