Back in February, manager Dave Martinez brought camels to spring training, a living and breathing metaphor intended to help the Washington Nationals get over the playoff hump. Five months later, Stephen Strasburg's injury woes could be the knockout punch that kiboshes the team's postseason chances and maybe -- just maybe -- morphs them from buyers into sellers.

Call it the Stras that broke the camel's back.

There's no shortage of reasons the Nats, who were expected to win their third straight NL East title this year, have struggled through the first two-thirds of the season.

Injuries have slaughtered them, as they've lost 1,034 player days to the DL, most in the National League. And it's not like it's been fringe guys getting dinged up, either. Hitting savant Daniel Murphy missed the first two and a half months of the season. Spark plug Adam Eaton was out for two months. Third baseman Anthony Rendon, catcher Matt Wieters, and first baseman Ryan Zimmerman have all been on the shelf, too. Then there's the season-ending Achilles injury to Howie Kendrick, the veteran utility man who was quietly one of team's most important players, both on the field and in the clubhouse. As if that weren't enough, All-Star closer Sean Doolittle recently hit the DL with a foot issue. And now the Strasburg news.

Beyond the injury issues, these days the NL Least looks like more the NL Beast. For that, we can thank the Phillies and Braves, a pair of young and promising clubs that appear to have arrived via next day air instead of standard shipping, and who've posted a combined 13-9 record against Washington.

And of course, there's Bryce Harper.

The popular narrative lately is that Harper's epic Home Run Derby performance could turn his season around, and make no mistake -- his season could use some turning around. Although he leads the NL in walks and is tied for most home runs, it's been a rough go for the former MVP. Entering play Thursday, his .216 average ranked 75th out of 77 qualified National Leaguers, and he was on pace to strike out 176 times, which would shatter his previous career high (131). He hasn't looked like himself in the field either, where he's accounted for minus-10 runs saved, one of the worst marks among all right fielders. But for all the hand-wringing over Harper's season and its impact on Washington's playoff chances, for all the boo-boos the Nats have sustained and for all the trouble Philly and Atlanta have caused, it's Strasburg's status that might be the biggest bellwether of all. 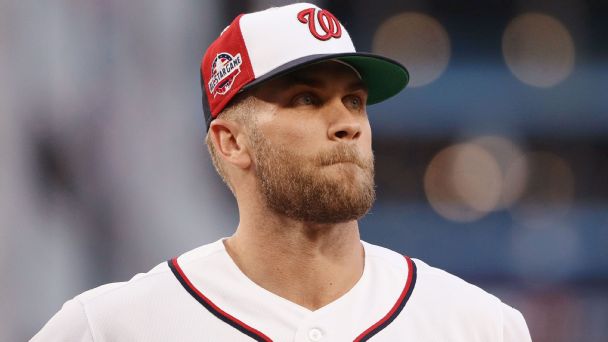 How crazy would it be for the Nats to consider dealing Bryce Harper? Story »

In May, the Nationals went 20-7, the best record in baseball. That was despite Harper hitting .221 with a .298 on-base percentage. It was despite Murphy, Eaton and Zimmerman missing the entire month. Despite Kendrick and Wieters going down. Despite the Braves going 17-12 and the Phillies going 15-11. The reason none of that mattered is pitching trumps all.

Led by Strasburg and ace Max Scherzer, Washington's rotation worked to a 2.26 ERA in May, best in the bigs. That month, Strasburg went 4-1 with a 2.51 ERA that was his lowest of any month this season by more than a full run. Through the first two months of the season, Washington's starters led the NL with a 2.86 ERA. In related news, when the calendar flipped to June, the Nats were 10 games over .500 and tied for first.

A week and a half later, Strasburg went on the disabled list with shoulder inflammation, and that's when Washington's season really started to go off the rails. Perhaps coincidentally, or perhaps because of the added pressure, fellow starters Gio Gonzalez and Tanner Roark went in the tank. It didn't help that No. 5 guy Jeremy Hellickson went on the DL too. Bottom line is, since Strasburg hit the shelf on June 10, the Nats' rotation has a 5.99 ERA. That is not a misprint. Just to confirm that number, I'll write it out:

In related news, the Nationals are 13-25 since.

The good news is, or was, that Strasburg made his much-anticipated return last Friday, starting Washington's second half opener against Atlanta. But that didn't go well, on or off the mound. Six days later, Strasburg is back on the DL and the Nats' season is on the rocks.

The club is calling it a "cervical nerve impingement." Roughly translated, that's a pinched nerve. Given Strasburg's lengthy medical résumé and the mysterious way the team typically handles injuries -- they quietly placed him on the DL early Thursday morning, but didn't officially announce anything until after 10 a.m. -- it's hard to know exactly how long said pinched nerve will sideline the former first overall pick. In 2015, Strasburg missed a little over three weeks with neck tightness. In 2016, he was out for a little under three weeks with what was officially ruled an upper back strain, but that appeared to involve the neck area as well. Using those data points as a gauge, it seems not entirely unreasonable to expect Strasburg might miss a few weeks. Then again, it could be a few months. At this point, we don't really know. What we do know is Strasburg's injury adds new intrigue to the trade deadline.

Before the Strasburg news surfaced, you could have made a strong argument either way as to whether the Nationals should be buyers or sellers.

The buy argument: They've been underperforming all year and are by-and-large the very same squad that steamrolled to two straight division titles, averaging 96 wins over the past two seasons. With most of their regulars at or near full strength, they were due for regression to the mean (in a good way). Strasburg was back, and Harper, fresh off his captivating Derby turn, had nowhere to go but up. By going out and acquiring some help prior to the deadline -- a catcher, a starter, maybe another bullpen arm -- the Nationals would be well-positioned for a stretch run that could catapult them into the playoffs, giving them a chance to get over the hump and win their first-ever playoff series (or more) in the final year of Harper's contract.

The sell argument: They've been underperforming all year and at this point, more than 100 games into the season, they are what their record says they are. With most of their regulars at or near full strength, they continue to flirt with the .500 mark (and not in a good way). Strasburg's first start back was ugly and Harper, despite his Derby turn, hasn't looked a whole lot different than he did before the break. By tucking their tail between their legs and breaking up the band -- think of the haul Harper could fetch on the trade market, not to mention fellow free-agents-to-be Murphy, Gonzalez and reliever Ryan Madson -- the Nationals could add young talent to a roster that already includes a top-notch nucleus (Scherzer, Strasburg, Rendon, Eaton, Trea Turner, Juan Soto), thereby insuring that regardless of where Harper signs this offseason, their championship window stays pried open another few years.

The question is, now that Strasburg has landed back on the DL, does that push the Nationals over the edge and transform form them from vendees into vendors? The answer: Fat chance.

Despite Roark's lights-out performance Wednesday, his struggles -- combined with those of Gonzalez -- already had the Nats searching for starting pitching help. If anything, Strasburg's return to the DL only intensifies that search. While Washington isn't likely to go top shelf for a Jacob deGrom type, there are plenty of middle-to-back-end starters out there, and it's not hard to envision GM Mike Rizzo grabbing one.

Besides the rotation, the Nats will continue to look for help at the catching position, where their .548 OPS ranks dead last in the majors by 50 points. And with Doolittle sidelined and the rest of the bullpen fatigued due to the starters' failures, it wouldn't be a shock to see Rizzo add another reliever on top of Kelvin Herrera, the former Royals closer who was the first big domino to fall when Washington acquired him in mid-June.

Yes, the Nationals are fighting for their season. But they're doing so against the Braves and Phillies, two precocious teams that aren't battle-tested and could easily wilt during the dog days to come.

Most importantly though, Washington's ownership has spent the past few years sinking oodles of money and emotional energy into a club whose clearest championship window appeared to have a 2018 sell-by date, if for no other reason than Harper's contract is set to expire. That ticking time bomb is why the Nats decided to let beloved skipper Dusty Baker go last year, after the team made a first-round playoff exit for the fourth time in four tries. That led to Martinez taking the helm, which in turn led to the camels.

Given the challenge that lies ahead for the Nats, maybe Martinez should've brought in a humpback whale too.