Until an emotional, last-minute change, Mike Trout was supposed to have "Kiiiiid" on his jersey again for Players Weekend, when major leaguers get to put whatever nickname they want on their backs. But in the clubhouse, he's simply Trouty. That's his ballplayer name, and, if you're a ballplayer, the odds are you have a ballplayer name.

"Why Trouty?" you might wonder. "What would my ballplayer name be?" you might also wonder. There are rules.

Rule 1. If your name starts with a "Mc," your teammates will probably call you Mac1.

Rule 3. They will work very hard to call you something other than your name3. If the Giants' longtime manager were named Bruce Boch, just like that, B-O-C-H, everybody on the team would call him Bochy. As in, "Bochy had a chance to make a move and score some runs and it worked."

But his name isn't Bruce Boch. It's Bruce Bochy. So everybody calls him, naturally, Boch. B-O-C-H. "Boch had a chance to make a move and score some runs and it worked." What makes a ballplayer name preferable to your regular name is that it's not your regular name.

Rule 4. Your teammates all know these rules without needing to be taught, without even knowing exactly what they know. A new Giant joins the team and doesn't call the manager BB, or Brucey, or Bocher, or BruBo, or Bucco, or just Bochy. He knows, as a bird knows how to build a nest, how the pieces of a name are used to build a new name. It's complicated, but it's linguistics, and you can figure a lot of these rules out.

So we did that. We went into four clubhouses with full rosters and got each player's ballplayer name and supplemented those with a few dozen examples from game stories. Exactly 200 names in all, directly from the sources, falling under a dozen or so different nicknaming categories. The rules start to emerge, such that a guy with a name like Sam Miller (known at various points in his early life as Sammy, Whammy and Slammin' Sammy) can estimate with pretty high confidence what his ballplayer name would be, if only he'd been a ballplayer.

Rule 5. If your last name is two syllables -- as about half of our 200 were -- and the first syllable is stressed (as in about 90 percent of the two-syllable names), then this first syllable is probably going to form the basis of your clubhouse name. Brad Peacock is Pea. Aaron Bummer is Bum. Derek Fisher is Fish. And Bruce Bochy is Boch. The stressed syllable is the nickname.

The bottom line is, if you have a two-syllable last name with the first syllable stressed, that syllable is going to be turned into your nickname, but the final step requires a little bit of an ear. If that syllable is a full, pretty cool word on its own, you can usually count on it standing alone: Gat, Park, Fletch, Red, Fish, Cap.

Rule 6. But if your name starts with a Z, X or Q, you are Z, X or Q4. Players whose names start with G could be known as G if a superseding rule doesn't kick in first; same with D.

Rule 7. If your last name is Gonzalez, you're Gonzo5.

Rule 8. If your last name starts with Wil-, or even Wel-, you're probably Willy6.

Rule 9. There is no rule that your ballplayer name shall be shorter than your real name. Of our 200:

Rule 10. If your last name is one syllable (and isn't Smith), add a Y. How does that sound? Pretty good? Pretty bad? Doesn't really matter. Unless we find a better rule for you somewhere else, that's probably your ballplayer name: Brandon Moss is Mossy, Aaron Boone is Boony, everybody named Jones is Jonesy.

If it sounds really terrible, though, and awkward to say, they'll play around with -er instead of a Y; give you a ballplayer name that's a noun instead of an adjective. Tyler Skaggs is Skaggser, Yan Gomes is Gomer. Oddly, Mike Trout's dad wasn't Trouty when he played, but Trouter.

Rule 11. Do you have an English first name that is commonly shortened or turned into a diminutive, like Scotty or Mikey or Bobby, that you don't already go by? That will almost certainly not be your ballplayer name7. That name is for children, and you are a grown-up!

If your first name is commonly shortened or turned into a diminutive and you do already go by it, that's fine, because (see Rule 3) they're probably going to call you something else anyway8.

'Skunk In The Outfield' 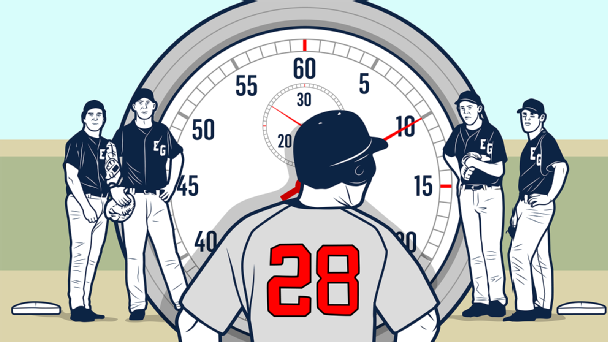 Rule 12. Do you have a first name that is not a common diminutive for English speakers? Then they very well might call you that diminutive: Dally for Dallas. Nooey. Yanny, Jeano, Salvy and Avi9. Diminutives commonly associated with women's names also have life: Nellie (Nelson Cruz), Molly (Paul Molitor), Holly (Derek Holland), Sally (Danny Salazar) and Birdie (Greg Bird).

Rule 13. Do you have a last name that can be turned into a common first-name diminutive? That's great! Nick Vincent can be Vinnie, but a hypothetical pitcher named Vince Nicholson wouldn't be Vinnie. Justin Anderson can be Andy, but Andrew Benintendi can't be; instead, Benintendi is Benny, which Ben Gamel can't be. (Gamel is Gam; Rule 5a.)

Robbie Cano sneaks in under this rule, since Robinson is a traditional last name.

Rule 14. Initials are an option for only a limited number of base letters: A, B, C, D, E, G, J, K, O, P, V, Y. If both of your names start with these letters, and you don't have a very strong stressed-first-syllable surname, your teammates will likely call you your initials: A.P. for Albert Pujols, J.V. for Justin Verlander, C.Y. for Chris Young, C.C. for Carlos Correa. Or, in some cases, enhanced initials, as in D-Bo for Daryl Boston. (Lucas Giolito's initials, L.G., are unacceptable on account of the L, so his clubhouse name is Gio, which is basically G.O., which are both acceptable initials, and also a last name shortened into a first name -- Rule 13.)

If you are already known by your initials (J.D. Davis), or by a single letter (e.g., Dee Gordon), you get to keep it.

Rule 15. If you have one strong-initial name and one weak-initial name, you can still get the initial-plus-name (or initial-plus-first-syllable) nickname: G-Rich for Garrett Richards, Nicky D for Nicky Delmonico, D-Span for Denard Span, J-Up for Justin Upton.

Call us crazy, but we have three not-so-modest proposals for revolutionizing baseball.

Part I: What if every team made the playoffs?

Part II: What if players got paid on commission?

Part III: What if teams could bid for more home games?

Rule 17. Miguels are Miggy, but -- as in the case of Miguel Gonzalez -- Rule 7 supersedes this rule.

Rule 18. If your name is Paul, you're Paulie10 (or Polly?), an exception to Rule 11 that exists for reasons I can't quite figure out. I think it's because ballplayers like names that sound like they're from previous eras. See, for example, all the Willies (Rule 8). This is a fairly hesitant hypothesis, though.

Rule 19. Three-syllable last names make the system start smoking, particularly if the first syllable isn't stressed. These are often resolved by previous rules: G for Giambi and Guillermo Heredia (Rule 6). Mac for McCarthy (Rule 1). Leroy for Leury Garcia (Rule 18), and so on.

When they don't, though, it opens up a whole new range of options, all of them harder to universalize:

Rule 20. You will almost certainly not be called something cool like the Splendid Splinter or Joltin' Joe or whatever. Maybe a more colorful, non-name-based nickname will take such hold in the world that it becomes part of your clubhouse name, but even in those very rare instances it'll probably be shortened to a sound: Boom for Boomstick, King for King Felix, Juego for Big Game James Shields.

But those literary nicknames are for publicists and sportswriters and historians and posters that kids put on their walls. These names are for something else. They're about creating a more intimate clubhouse, and about having names that can transfer easily from clubhouse to clubhouse. You don't want to spend six weeks trying to feel comfortable in a new clubhouse when you're traded; you want somebody to call you Mac by the end of the first day.

In "An Analysis of Baseball Nicknames," SABR researcher James Skipper looked closely at the golden age of nicknames -- the early and mid 1900s. Even then, he found, only about 12 percent of nicknames were what he called "individual and esoteric." Far more were based on immutable characteristics. One in six nicknames was either Lefty, Red, Doc, Bud, Dutch or Big _____. If you're trying to make a guy into a legend, you'll call him The Great Bambino. But if you just want to tell him, in a non-complicated way, that you're on his side, Lefty -- or Trouty -- will do.

Sam Miller. Bad letters for initials (Rule 14), and no real potential with the first name (Rules 11 and 12). Two-syllable last name, first syllable stressed (Rule 5). Mill isn't a great first syllable, so it probably won't be that as a standalone, but it'll be Mill-based. Not Miller, obviously, because that's already the name (Rule 3). Maybe Millie (Rule 12). Probably, though, Mills.

"I played with a Miller," the Mariners' Andrew Romine (Row) tells me. "He was Mills."

Well, OK. But this should probably work for you.

1 Brian McCann, Collin McHugh and Lance McCullers Jr. are all Macs -- in the same clubhouse.
2 Joe Smith, Kevan Smith, Chris Smith, Josh Smith, Tyler Smith, Carson Smith, Will Smith.
3 Of the 140 names we asked about in our four clubhouses, only 19 weren't known by another name. Some might actually have nicknames that just didn't come to mind when we asked their teammates.
4 Mike Zunino, Xavier Cedeno, Quintin Berry. In a slightly better world, Colin McHugh would be known as Q, but under Rule 1, he is Mac.
5 An exception is made for CarGo, Carlos Gonzalez, though other teams' players seem to call him Gonzo.
6 Tyler Wilson, Welington Castillo, Josh Willingham.
7 Unless you count Paulies, only three of our 200 players were known in the clubhouse by a common diminutive version of their first name: Matt[y] Davidson, Tim[my] Lincecum and Rick[y] Renteria.
8 Even Mookie Betts is often just Mook.
9 Noe Ramirez, Yan Gomes, Jean Segura, Salvador Perez, Avisail Garcia.
10 Paul Molitor is, besides Molly, sometimes Paulie, and he's in the Hall-y, by golly.