This summer, when we asked major league veterans to talk about getting old, only one of them -- Adam Jones, father of two sons -- brought up Lightning McQueen.

Aging is not so much the body breaking down, Jones theorized, as the fact that every generation is better than the one before it. "It's not an excuse, but the game's gotten harder. That's all it is: the next generation. It's like that line from 'Cars 3.' His grandpa told him, 'You'll know when to retire. The youngsters will tell you.' I'm nowhere near that, but the next generation's here, and they're really good."

It was the car's uncle, not his grandpa, but otherwise Jones knows of what he speaks. The next generation is here, and they are really good. This is true of every generation -- a universal truth -- but it has probably never been more true in baseball than it is right now, right this very second.

1. In 2018, players 25 and under had an OPS that was 3 percent higher than that of the rest of the league. That probably doesn't knock you over, but to appreciate the significance of it, we have to deal with the problem of selection bias. ("Sabermetrics is 95 percent accounting for the bias in your sample and 5 percent long division." -- Russell Carleton.) So put point one aside for a minute. We'll get back to it. 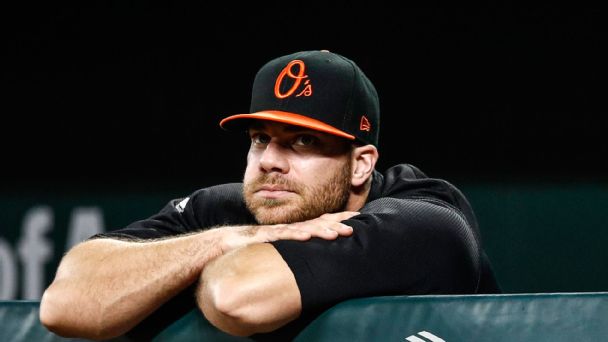 Sam Miller looks back at an MLB season to remember (or to forget, depending).

• Young players weren't just good this year. They were historic. »

• 'I won't throw it there again': What we learned from the most wicked comebackers of '18 »

2. In 2018, batters 25 and under accounted for about 51,000 plate appearances, or 27.6 percent of all the plate appearances taken across the majors. (We're focusing only on young hitters here because pitching aging curves are less linear, and pitcher performance by age hasn't shown the same recent changes.) At the start of this decade, that share was less than 21 percent. To find a season when young players took a higher share of playing time, you have to go back 40 years to 1978. Throughout the subsequent free-agency era, young players took on a significantly smaller share of playing time, probably driven by economics: Teams wanted to start young players' service time later and felt more pressure or incentive to play the older guys whom they were already paying a lot of money.

Those 51,000 plate appearances tell us two important things. One is that major league decision-makers appear to think young players are better now than they used to be; GMs call up those young players, and managers put those young players in the lineup. While there are other factors to consider -- more tanking teams might be playing their young guys, more GMs might be trying to cut short-term costs by playing pre-arbitration players instead of signing older free agents -- the league-wide effect is big. The average hitter last season was, at 28.1 years old, a full year younger than the average hitter in 2007 and younger than in any season since 1979. The fact that there are more young players playing more is significant data all on its own.

This also means that we're dealing with a broader, less select pool of young players. If, hypothetically, there were only five players under 25 in the majors one season, they would presumably be the five best young players in the world; their collective OPS would be outrageous. The bigger the pool, the lower the collective OPS should be -- especially relative to the correspondingly smaller, more select pool of older players -- if we assume a relatively rational world. This isn't, in other words, just the result of Juan Soto and Ronald Acuna being disproportionately good. It's about hundreds of players.

Because players (of any age) who can't hack it in the majors tend not to spend much time in the majors -- selection bias -- each age group tends to stay pretty close to 100. But young players are the exception. They're almost always lower than average, for some common-sense reasons: Young players with little major league experience are harder to evaluate, so teams are more likely to err by calling them up before they're ready; young players are more likely to be called up, even though everybody knows they're not ready, so they can gain experience; and young players (at Triple-A or Double-A) are, as the in-case-of-emergency backups, more likely to be forced into action because of an injury on the major league roster.

And it is so: In 87 of the past 111 seasons, players 25 and under were collectively worse than average, and the median group of youngsters is 3 percent worse than average. There have been only two seasons in which 25-and-under players were better, relative to the rest of the league, than they were in 2018. One of them was nearly a century ago (1928), and in the other -- 1946, coming out of World War II -- young players took just 16 percent of plate appearances, the third-lowest share ever.

The skill most associated with youth, and that most reliably deteriorates with age, is speed. It isn't surprising when young players outperform older players in stolen bases, batting average on balls in play, triples and defense. But none of that is what's driving the numbers above. Rather, young players are thriving at skills we have traditionally associated with late 20s (power hitting) or later (plate discipline):

So we've settled that.

A few years ago, I was talking to the high school coach of a famous first-round draft pick about how travel ball was changing the sport. The best teenage players in the country were not just playing a lot -- Bryce Harper reportedly played up to 130 games a year throughout his tween and teen years -- but were also playing a lot against the best players in the country, against the highest velocity and the most precocious breaking balls. They were playing in adult-run practices and learning under professional-level instruction.

"I don't think all that makes them any better in the long run," the coach told me. "It does make them good quicker." Fifteen was the new 17.

The same might be true of modern player development systems, which had been somewhat late adopters to analytics. Twenty-four is the new 27.

FanGraphs writer Jeff Zimmerman has studied the aging curves of different baseball skills, and his recent findings support this shift. Power and performance used to peak in players' mid-20s, but in this era, Zimmerman writes, "hitters arrive at their peak and simply decline with age ... home runs no longer peaked, they only declined. I examined just about every overall offensive stat (OPS and wOBA, to name a couple) and found the same thing: Hitters no longer peaked, they only declined."

Zimmerman wrote that after the 2013 season. Since then, the percentage of major league plate appearances young players get has gone up each year but one. Young players' walk rate, relative to the league average, has gone up every year, and their relative isolated power has gone up every year but one. To a major league veteran, this isn't great news. "I'm worried about the state of baseball, to be honest," Frank Thomas said this spring. "If these young kids continue to impress like this, coming up hitting home runs, doing so much on the field, what's going to happen to the veteran players five years from now?"

What would happen would probably be commissioner Rob Manfred throwing a huge party. "Obviously, we think young players are more appealing to young people," Manfred told Grantland in 2015. "You have to have a great plan to market the game that includes advertising, but when you get raw material like Bryce Harper and Mike Trout, you have to just count your lucky stars. They can be the face of the game for more than the next decade."

This will undoubtedly be the subtext of this month's winter meetings. The self-interested baseball executive used to have a big incentive to keep young players in the minors, where they could continue to move toward their peaks without getting more expensive. The same executive now increasingly has an incentive to bring those young players up -- to capture their peaks while they exist.

Adam Jones, meanwhile, will be a free agent at those winter meetings. The youngsters will, in their indirect way, tell him.