Barely more than a week after Manny Machado picked the San Diego Padres, Bryce Harper is headed to the Philadelphia Phillies. What does the deal mean for baseball's new $330 million man, the team that signed him and the rest of baseball? We asked ESPN baseball writers Eddie Matz, Bradford Doolittle, Sam Miller and David Schoenfield to break it down.

Gut reaction: Do you like this deal for the Phillies?

Bradford Doolittle: Yeah, it kind of had to happen, didn't it? Thirteen years seems surreal on the face of it, but I thought $330 million for 10 years would work for the Phillies, so the extra length only serves to keep the average annual value down for tax calculation purposes. Whether it's three, four or even six upside-down seasons at the back end of the contract, it should be worth it. The Phillies are all in, as they should be after keeping their payroll down the past few years, and have the dollars and the minor league talent to fill holes over the next few years. Get ready, NL East fans: It's on.

Bryce Harper to the Phillies

There were other huge offers out there, but the mutual commitment made the difference for Bryce Harper and the Phillies. Jeff Passan

Miller: Baseball's LeBron? How we were right -- and wrong -- about Bryce

Eddie Matz: What's not to like? They got the guy they wanted (well, one of them). He fills some crystal-clear needs (corner outfielder, lefty stick). And all it cost them was some stupid money. Well, a whole lot of stupid money. But hey, if you can't spend it, then what's the point?

Sam Miller: From 2009 through 2014, the Phillies' payroll was consistently $50 million to $70 million more than the league average. Then, as the crucial part of their rebuilding process, they cut it to $40 million below league average in each of the past three years. It's not just that a team of Philadelphia's market size can easily afford a player like Harper making $25 million to $30 million a year. It's that the whole point of everything the Phillies just put their fans through was to clear payroll so they could sign Bryce Harper (or somebody like him). It's not just a deal I like; this deal was something of an imperative.

David Schoenfield: Here's a slightly different take: We're all focusing too much on the money and whether the Phillies paid too much. We don't know! The Albert Pujols contract looked great for the Angels at the time. The bigger issue: How good will Harper be? From 2016 to 2018 -- which admittedly ignores his monster 2015 season -- Harper ranked 22nd in the majors in wRC+ according to FanGraphs, behind Matt Carpenter and Tommy Pham, among others. Of course, there's always the hope that he can come close to 2015 again. Are the Phillies betting on that? Or are they simply betting on eight seasons or so of Harper being a top-15 hitter in the game? Will they be happy if that's the case? What if he is already morphing into a player with "old player" skills (more walks, lower average, bad defense)? The AAV is low enough that the contract probably won't haunt the Phillies, but there's also a chance they just gave the biggest contract in MLB history to a very good hitter, but not a dude who is one of the top 10 players in the game.

Who is the biggest winner of Harper joining the Phillies?

Doolittle: I'm assuming there will be a little initial pushback in Philly about this since the protracted nature of the negotiations sends the message that Harper didn't really want to play there. I'm sure there will be a love-hate relationship that develops between Harper and that fan base. But that's all good stuff! And Harper, who set his sights on Cooperstown long before he got to the majors, will have a better chance to put up huge numbers in Citizens Bank Park than he would have in either Dodger Stadium or (especially) The Orc.

Matz: Um, Bryce Harper. Generally speaking, any time you can sign your name on a piece of paper and you are thereby guaranteed to earn a third of a billion dollars (give or take), you're a winner in my book.

Miller: The Phillies. The headlines to this deal will note that it's the biggest contract in baseball history. But relative to the sport's growth in revenue, and relative to previous megadeals to pre-decline superstars, this one isn't expectations-shattering, and the cost of the far-distant seasons at the end of the deal isn't particularly daunting. In fact, it basically looks like the 10-year, $330 million deal you'd have reasonably expected for Harper -- with three "free" years tacked onto the length.

Schoenfield: I agree with all of the above. But you know who else is a winner in all this? Rob Manfred. For all the kvetching from fans, players and baseball Twitter all winter about the slow pace of free agency and suggestions of collusion or something close to it, in the end Harper got $330 million and Manny Machado got $300 million. Manfred's argument to let the market play itself out seems to be correct. The stars got their big deals. (And, yes, some quality free agents like Dallas Keuchel and Craig Kimbrel still remain unsigned.)

Who is the biggest loser of Harper joining the Phillies?

Doolittle: The Braves took a very measured approach to this offseason, much to the chagrin of a lot of their fans. On the very same day that reports came out about Atlanta's huge surge in revenue, this happens. I know the Braves want to see how their roster grows organically with a good collection of young players -- including some high-ceiling position players -- on the way. But if none or few of those players stick and the Braves end up looking up at a Harper-led Phillies squad the next few years, those glowing revenue reports might fade fast. 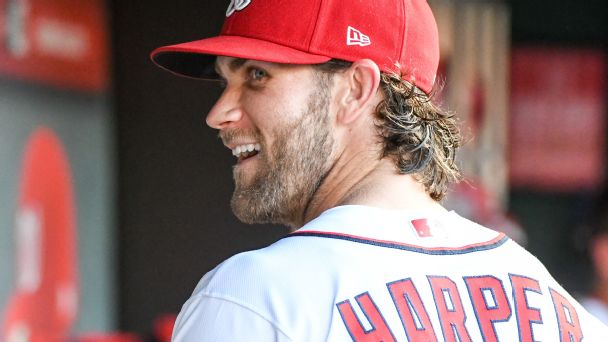 With Bryce Harper headed to Philadelphia, this is what the Phillies lineup could look like this season:

Matz: Um, Bryce Harper. When Harper fails to run a hard 90 down the line, or when he goes through bad stretches -- and there will be bad stretches -- he won't know what hit him. It'll be the vitriol from Philly fans, who couldn't possibly be any more different than those in D.C.

Miller: These deals always have a ton of uncertainty, and that uncertainty grows each year the further out you go, but the one thing we can usually state with some clarity is that the player who signs a $330 million contract will probably be pretty good in Year 1. It just so happens that Year 1 looked like it could be one of the closest NL East races ever, with the Braves, Phillies, Mets and Nationals all projected (by some systems) to win between 85 and 89 games. So it's awful timing for the Braves, Mets and Nationals that this was the year the Phillies would get Harper, that this was the year the Phillies could most confidently bank the value of his superstardom. This deal will quite possibly flip the NL East title. Of course, those other three teams could have offered Harper 13 years and $335 million, and there's a good chance that in five years Harper's deal will still look eminently reasonable and they'll all regret that they didn't.

Schoenfield: I'll go with the Giants. What is their game plan? They have an old and expensive team and if they are intent on contending in these waning years of the Buster Posey/Madison Bumgarner/Brandon Crawford team, they needed a power bat for the league's worst outfield. They didn't get it. More so than the Dodgers or even the Phillies, they needed Harper for their lineup.

Which player do you think will provide the most value on his new deal: Machado or Harper?

Doolittle: It kind of depends on how quickly things come together in San Diego. You can see a scenario in which Machado has his best seasons there before the Padres' window is fully open, while Harper ends up having a splashy, J.D. Martinez-like first season in Philly. In terms of in-a-vacuum performance, these guys are very close, and I would expect them to remain that way, even though Harper's defense could be a growing issue. (If he needs to move to first, what happens with Rhys Hoskins?) Still, I'd take Harper on this question because I think he'll have more cracks at his value contributing to pennant contenders.

Miller: I like Harper's deal more for the Phillies, and I think I like Harper more as a player in five years, but both teams should be happy.

Schoenfield: Machado's premium defensive ability and durability make him the better bet to earn the value of his contract -- but the Phillies are the better team and more likely to make some World Series appearances, so maybe that means Harper is the better value.

Which player do you think will appear in a World Series for his new team first: Machado or Harper?

Doolittle: Harper. The Padres need to piece together a big league rotation, and they may continue to be blocked by the Dodgers for the next few years. The Phillies' competition in the NL East will be rough, and the field there is more crowded at present than what the Pads have in the West. But there are just more ready-to-win veterans for Philadelphia, and if the Phillies can bob to the surface in that division, they'll be World Series-caliber. Could even happen this season.

Miller: The Phillies' chances are considerably better this year, and beyond that, forecasts tend to flatten out. If neither player has won one in the next five years, I'll say the Yankees will trade for both and they'll make the World Series together. (No-trade clauses are merely openings for negotiations.)

Schoenfield: Harper and the Phillies. At this point, the Padres still only have one proven star: Machado. (Sorry, Eric Hosmer doesn't count). They'll need to hit on a lot of those prospects before they're close to the Dodgers or even the Rockies.