FORT MYERS, Fla. -- My ESPN colleague Tim Kurkjian likes to say that baseball players are the best athletes in the world -- or at least the most underrated. I agree. Of course, Tim and I are baseball fans and absolutely biased in this regard, but we are also right. This is not a matter of debate.

This topic came up when I was down at the Boston Red Sox's spring training, and we were discussing Mookie Betts. A couple of days before, MLB had tweeted a highlight video of Betts in action -- not only hitting home runs and robbing home runs but also dunking a basketball, making a slick move on the football field and bowling. The tweet went viral:

Is Mookie the Betts athlete alive? 😱

Even Dave Dombrowski, the Red Sox president of baseball operations, saw the video. When Betts reported to camp -- several days early, by the way -- Dombrowski greeted him with, "Hello, wide receiver."

I asked Kurkjian if Betts is perhaps the greatest athlete in the world right now. He told me a story of an NFL player -- the best at his position at the time -- throwing out the first pitch at a baseball game. Kurkjian was working the game, and the player came up to him and asked, "How do I do this?" Kurkjian thought the player was merely asking where to stand when he threw the pitch. No, the player was literally asking, "How do I throw a baseball?"

It seems like a simple exercise. Any good athlete should be able to throw a baseball. Well, here's nine-time Olympic gold medalist Carl Lewis attempting a first pitch:

It's not so easy. Now try hitting one buzzing at you at 98 mph. As Adam Jones once told Kurkjian, "I've told players from other sports, 'We could play your sport better than you could play our sport.'"

This brings us back to Betts. We know how good he is at baseball: He's the reigning American League MVP after hitting .346 with 32 home runs and 30 steals, winning a Gold Glove and leading the league in batting average, slugging percentage, runs and WAR. It was one of the greatest seasons in Red Sox history:

The case for Betts as the world's best athlete rests not just in his ability to dominate the most difficult of sports but also in his ability to do everything else. As he sheepishly told me, "Everything I played, I kind of found a way to be pretty good at. My mom always said, 'If you're not good at something, then don't do it.'"

With that in mind, I asked Betts about his ability in a few other activities. 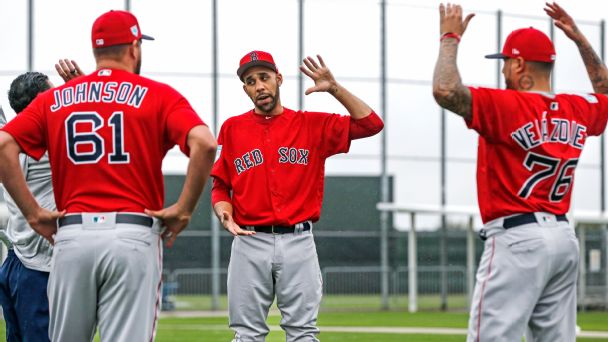 Go behind the scenes with the defending champion Red Sox. Thursday's contest will be part of a special "All-Access" presentation featuring in-game player interviews and more. Watch on ESPN

Football: Betts' mom didn't let him play football in high school, but he was always around the game at Overton High School in Nashville, Tennessee. "I was water boy all four years, so I went to practices, every game, didn't miss a game all four years," Betts said. He wanted to be around his friends even if he couldn't play, so in practice, he'd throw to receivers or run routes for the quarterbacks. How many water boys turn into MVPs?

As for his football skills, they looked impressive on the video. "He could probably suit up for a lot of clubs right now and play," Dombrowski joked. Considering the abundance of undersized slot receivers in the NFL, it seems Betts could fit right in as Tom Brady's new go-to target.

Basketball: As a high school senior, Betts averaged 14.4 points and 5.8 assists and was named MVP of his district. "Sports is just something I have a knack to figure out how to play. Obviously, I'm coordinated and whatnot," he said. The good teammate that he is, Betts quickly added, "Just like everybody here is. We're all good at something else."

Bowling: Betts' bowling skills are legendary by now. In 2017, he bowled a 300 game in the qualifying rounds of the World Series of Bowling. In early February, he and partner Tommy Jones won the CP3 PBA Celebrity Invitational. He said facing Justin Verlander is much tougher than facing a 2-10 split: "You make a 2-10 split pretty often when you bowl as much as I do." (Then again, Verlander is the one pitcher who seems to have Betts' number. He is just 2-for-24 against the Houston Astros ace.)

Now, maybe you're smirking at the inclusion of bowling here. I get that bowling isn't necessarily a sport in which traditional measures of athleticism -- speed, agility, strength, endurance -- are critical to success. But like baseball, it is a sport of repetition and precision. No wonder Betts excels at it.

Indeed, that's one reason Betts is so good at baseball. He has the natural ability, of course, but he has honed those skills through a lot of work. My favorite play from last postseason came in Game 4 of the American League Championship Series, in which Betts threw out the Astros' Tony Kemp trying to stretch a single into a double:

It was a play of sublime beauty that perfectly encapsulates Betts' athleticism: the anticipation that Kemp would go for second, the speed to get to the ball, the balance to quickly pivot and make the throw, and the execution to fire a rocket right on target. Even Betts knew it was a good play. He rarely shows emotion on the field, but he slapped his fist into his glove after the out call. After the game, Betts explained that he was able to make the play because it's one he practices in spring training.

He takes the same approach to his work at the plate. Of Betts and teammate J.D. Martinez, Red Sox manager Alex Cora said, "If you hear them talking around the batting cage, you'd think they're the worst hitters in the league." In other words: never content, always looking to find ways to improve. Repetition and precision -- until athleticism becomes muscle memory.

Pingpong: The Red Sox have a pingpong table set up in the middle of their spring training clubhouse. Betts said Chris Sale is probably the clubhouse champion. "I feel like I'm right up there with him, though," he said with a laugh.

Golf: Betts doesn't play much, perhaps a few times during spring training for the most part, but he said, "I'm all right." He guessed his handicap is probably 12 or 13. "I try to get out during the offseason, but it's cold and rains in Nashville, so I don't get out much." Just don't let him drive the golf cart.

Mile run: "I think the fastest I did in high school was 6:45 or something like that," Betts said. Maybe we've found a weakness here. From watching Betts do some running drills one day in spring training, let's just say I'm not sure he's a threat to break four minutes in the mile anytime soon. Then again, if you put the challenge up to him, who knows?

Checkers and chess: "My dad taught me how to play those. I don't get to play often, but I have an idea what I'm doing." Does he usually win at those, too? "Yeah."

Rubik's Cube: Yep, he's good at this, too. The video evidence:

His expertise at the Rubik's Cube helps explain my theory on Betts. He's one of those individuals who would be good at whatever he put his mind to: cooking, brain surgery, investment banking. He has the discipline and work ethic -- and the desire -- to be the best. If he'd wanted to be an accountant, he would have been the best damn accountant there is. Luckily for us, he chose baseball.

The thing that makes baseball so hard is that it requires a balance of athleticism and skill. That's what Betts possesses. He has what psychologists term "bodily-kinesthetic intelligence," in which mind-body coordination is nearly faultless.

But he also seems to have "logical-mathematical intelligence," as illustrated in the Rubik's Cube video. In some ways, baseball players are like finely tuned robots, repeating specific skills until they master them. Solving a math problem can be construed as similar to throwing out Tony Kemp or figuring out how to make adjustments on hitting a curveball. You must have a brain that works in cohesion with your body.

Is Mookie Betts the best athlete in the world? Hey, maybe he isn't even the best in baseball. Cora suggested that Betts, Jose Altuve and Francisco Lindor are "pound-for-pound" the best athletes in the game right now. I guess until somebody revives "The Superstars" -- those of you who grew up in the 1970s and '80s remember the show -- we'll never really know. Until then, we'll just assume that Mookie Betts is better than us at just about everything.