GLENDALE, Ariz. -- It was either the World Series or the postseason round before that. Walker Buehler is fuzzy on the details. All he knows is that the stakes were high and that it was the second or third inning, and that all of a sudden he had forgotten how to throw his curveball. He yelled at whoever was within earshot to fetch Clayton Kershaw and Rich Hill because they needed to reteach him the grip they showed him a week earlier. He needed to feel it again, and so Kershaw and Hill rushed over to help.

It showed a few important things about Buehler -- that he isn't afraid to be vulnerable, that he is always open to tinkering, even in the middle of a critical start, and that, as a 24-year-old rookie, he had already commanded the respect of the two most seasoned members of the Los Angeles Dodgers' rotation.

Buehler carried a 2.62 ERA, a 0.96 WHIP and a 4.1 strikeout-to-walk ratio through 137⅓ innings during the regular season in 2018. Through August and September, he held opponents to a .500 OPS (287 points below the major league average). With the National League West on the line at the start of October, Buehler twirled 6⅔ scoreless innings. In Game 7 of the NL Championship Series, he recorded 14 outs and allowed only one run. In Game 3 of the World Series, he blanked the mighty Boston Red Sox through the first seven frames.

Buehler finished third in NL Rookie of the Year voting, an award he would have captured had Ronald Acuna Jr. and Juan Soto not been so impressive on a daily basis.

Buehler's assessment: "I don't think I was really good.

"To me, what Kersh does is really good, when he does it for 10 years. I had a good year. If my fastball ticks down 4 miles an hour, or if I can't command it the way I want to, I've given up big runs. I've given up a lot of runs in games. That's the stuff that's limiting."

On any given night, Buehler can effectively command up to five pitches, six if you include the changeup he is resolved to improve. But it all plays off his mid- to upper-90s four-seam fastball. If the positioning of his hand and the tempo of his delivery are sound enough to throw that pitch effectively, everything else flows naturally. 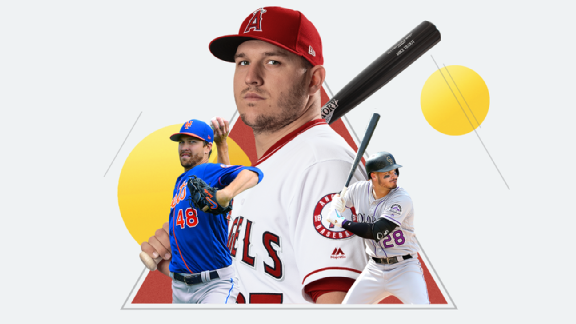 Buehler believes the fastball command eluded him too often last season. He was asked about the starts when that pitch felt right, by his standards, and rattled off some starts against the St. Louis Cardinals and the Colorado Rockies before stopping himself.

Buehler identified the one start when his fastball was most noticeably off, in Game 3 of the division series, when a walk to the opposing pitcher led to the grand slam that spoiled his outing. It was the perfect example to prove his point.

"It's not the velocity, it's the command," Buehler said. "I can't walk a pitcher in a playoff game. That can't happen. But that's when my fastball is not good. They were all 97 to 99 [mph]. It doesn't matter. They're not strikes, they're not executed -- it doesn't matter."

The Dodgers drafted Buehler 24th overall in 2015 despite his need for Tommy John surgery. Throughout his life -- while growing up in Lexington, Kentucky, starring at Vanderbilt and shooting his way up the Dodgers' system -- Buehler became known for his borderline arrogance and an ability to generate high velocity from a short, wiry frame.

Just as important was how effectively he self-analyzed and how persistently he expanded his repertoire, a rarity for someone with such an overwhelming fastball.

Said Buehler: "I'm one of those guys that throws everything I can."

Heading into 2018, the Dodgers wanted Buehler to focus on developing as a professional and honing the pitches he already threw. Instead, Buehler added a cutter to complement the slider that he was beginning to throw with more depth. Throughout the year, he went back and forth between a knuckle curveball and the more traditional curve, never quite settling on either one. The grip on his slider changed constantly, depending largely on how it felt during pregame bullpen sessions.

Some of those around Buehler have brought up the idea of limiting his arsenal, but that isn't an option.

"I have no want to do that," Buehler said. "I think the more that you throw, the more pitches that you [have confidence] in. I think it gives you more of a chance to have one of them be really good every start. That's the big thing."

The Dodgers set an innings limit for Buehler last year, then forgot all about it because he continued to pitch so well. There will be no such limitation this year, but the Dodgers have slow-played Buehler throughout spring training, delaying his bullpen sessions so that he doesn't build too much of a workload before the games start counting.

Buehler is expected to contend for the Cy Young Award in 2019, but he has only one number in mind.

Buehler usually does. He did it, quite memorably, on a humid afternoon in St. Louis on Sept. 14. In the bullpen, moments before taking the field, Buehler once again changed the grip on his slider, randomly going back to an old one he had scrapped. It felt good, and pitching coach Rick Honeycutt liked what he saw. They agreed to bring it into the game, and Buehler generated swings and misses on a third of the sliders he threw, riding the pitch to eight scoreless innings in the heat of a division race.

Buehler was told that it takes a certain level of confidence to implement such a drastic change right before such an important start.

"You can also say it takes a little bit of insecurity, right? Kershaw throws the same thing every time he goes out. And he knows that if he's good, he's good. If he's not, he's not. For me, I was still getting used to pitching in the big leagues. I'm trying to figure out anything to more skate by than beat everyone."