It could easily have been $600 million, probably $700 million. To get into a real debate, you might have had to double this extension to $860 million. Mike Trout might be worth a billion dollars over the next 12 years.

The math to get to $430 million is so simple it's almost laughable, so let's just blast through it: A "win" added on the free-agent market typically goes for around $10 million. That price has gone steadily up for decades, so with inflation one could easily estimate $15 million per win by the end of this deal. By WAR Trout is the best player through age-26 in history. Unsurprisingly, he projects to stay very good for a long time.

PECOTA, the projection system at Baseball Prospectus -- which uses a combination of the player's past stats and the aging curves of his most comparable players -- foresees an 8.4-WAR season this year and an 8.8-WAR season next year, the two years the Angels already had him under contract. Beyond that -- and let's allow that there is more uncertainty the farther out a system goes, but also that projection systems tend to worry about the worst-case scenarios, and therefore tend to be fairly conservative -- he projects to decline only slowly and slightly through the rest of the next decade:

He will not be exactly the same player as he ages. He'll slow a bit, eventually move from center field to a corner, and by the end of this deal it might very well hurt to watch him run. But he's got elite strength, elite plate discipline, an elite ability to make adjustments, and he starts with such a broad, athletic, speedy skill set he'll age happily into different types of MVP seasons.

The median MVP season, incidentally, is around 7.5 WAR, so he'll project to be the MVP front-runner for the next five years and an MVP candidate all five years after that --after which PECOTA's 10-year projections quit being helpful. A 6.2-WAR season would represent Paul Molitor's career high, so through 2028 he'll still be playing around the peak of a Hall of Fame-caliber player. (He'll be only 36, and he's been consistently well above the peak of a Hall of Fame-caliber player so far.) If he drops by a win per year after that -- an All-Star still at 37 and 38, league average by 40, out of the league around 42 -- then in the next 12 years he'll project to 85 WAR, or 68 WAR over the extra 10 years the Angels just locked down. At $10 million per win, those 85 WAR are $850 million. With conservative expectations for salary inflation, just over $1 billion. Or, considering just the final 10 years, he'd be worth something near $850 million, plus the $66.5 million he was already owed for the next two seasons. Double this contract extension and it'd still be about right. You don't have to go along with all of those conclusions to say this is a huge bargain.

But, you might say, how could it be such a bargain if this is what the market has yielded? The answer is a little counterintuitive, and what Russell Carleton -- formerly of Baseball Prospectus, now of the New York Mets -- has called The Guinness Effect. In short, the very best players in baseball don't get paid what they're "worth" -- there are no $60 million players, even though there are lots of 6-win players -- because "instead of obeying the laws of economics, we suddenly shift over to a cultural norm for determining prices for players." Owners don't want to pay dramatically more for a player than anybody else is getting, because it looks reckless and might cause resentment among other owners. Players might not even want to get such a headline contract, because it puts a target on them among fans, many of whom have traditionally been unkind to players making too much money to play "a kids' game." So, instead, we see the best players ask for long contracts. That's how you end up with veteran stars who are underpaid during their peaks but overpaid at the back end of their contracts. 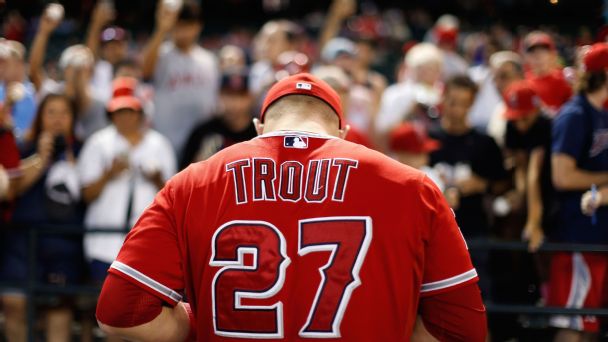 ESPN goes behind the scenes for an in-depth profile of MLB's best player. Watch »

Olney: Untold Mike Trout stories from those who know him best »

Because of this tendency, the value of superstars tends to be camouflaged a little bit, and makes us doubt what our eyes and our math are telling us. But consider what the Dodgers reportedly offered Bryce Harper this winter: Four years and $180 million, or $45 million per year. On a short-term deal, they were willing to acknowledge Harper's true value -- and, yes, Harper has been about half the player Trout is -- instead of obscuring it across a long and complicated contract structure. Trevor Bauer, the Cleveland Indians' ace pitcher, is intent on proving this truth by going year-to-year when he hits free agency.

In the meantime, though, this is us telling you: Believe it. It might defy our imagination to consider Trout being worth $90 million a year in a sport where nobody else is getting more than $35 million a year. He is. Over the past seven years he has added more value on the field than Paul Goldschmidt and Justin Upton put together, or Harper and Buster Posey put together, or Jose Altuve and Miguel Cabrera put together. He's been worth that much, and if we believe the conservative projections, it's going to be a long time before he's not.

But Trout is not merely a player, and the Angels are not merely a first-place-pursuing machine. They're also a franchise, and Trout is one of the greatest franchise players this sport has ever seen.

There's an usher named Albert whose post is near the fourth-floor elevator at Angel Stadium. One day, Albert gave a chirpy "hello" to a regular. "You know," the regular told Albert, "I've never heard you say something not nice. I've never seen you morose." Albert told him, "People come here for the experience." "They do!" the regular agreed. "It's like Disneyland," Albert explained.

Watching Mike Trout in Angel Stadium will make you think Trout read the same employee handbook Albert did. He's fanatically interactive with the fans during the game, acknowledging the ones who call out his name during innings, waving to little ones when he's in the on-deck circle, signing autographs right up almost until first pitch nearly every game. There is widespread consternation in the sport about Trout's inability to break through to megafame among national and international audiences, but baseball is primarily a sport of regional fandom, and Trout is perfect on that scale.

Can the Red Sox repeat? Will L.A. stumble? Who is MLB's best player? Pinch hit on this fill-in-the-blanks 2019 baseball forecast, but we'll have the last word. Play the game! »

He's made it this far into his career without a whiff of scandal, or even drama. (Know what Angels fans moan about when it comes to Trout? Basically nothing, but here's one fan complaining that Trout doesn't sprint out to his position. He doesn't sprint out to his position in part because he's such an amiable, social person that he talks to umpires, teammates, even security guards on his way out.) The way this contract extension came together (no ultimatums, no public threats or complaints) is a continuation of that no-drama career. Remember, before this extension he signed a six-year extension in 2014 that, while it would eventually make him the highest-paid player in the game, seemed way below what he'd have made going through the combative arbitration process year to year. And before that, he signed for slot as an Angels draft pick. The story of that signing was told in Sports Illustrated:

"About a week [after the draft], Jeff Trout called Eddie Bane. "Can we just get this done?" Jeff asked. "I need to get him out of the house and back on the baseball field, because he's driving us crazy." Within a month, the Angels had signed him, for his slot-suggested bonus of $1.215 million.

This isn't to suggest there's anything noble about a player passing up his full earning potential, or being combative in contract talks. Those who want to should, with no guilt; unionized baseball players fought and sacrificed to guarantee their professional descendants would have those rights. But Trout has regularly made the decision that his career priorities also include being in a place where he's comfortable, being in a situation that is mutually beneficial for him and his franchise, and traveling through his career without picking up enemies. The union fought for that right, too: the right for Trout to do what's best for him, to use his leverage in whatever way makes him happy and strengthens his legacy.

And if this contract -- or the next one -- carries him through the end of his career, he'll quite possibly have the greatest one-team career ever. Stan Musial played every game of his career with the Cardinals and produced 128 WAR, the most ever by a position player who didn't change teams. Trout is halfway there. If PECOTA is right, he'll pass Musial by the penultimate year of this deal.

Is there a price you can put on having Stan Musial in your franchise lore? Maybe? Maybe not, though, and if you do it's certainly above $430 million. At a certain point, owners all need to ask themselves what they're doing, and if the answer doesn't have room for Mike Trout at almost any price, then they should get out of the way and let somebody who actually loves this game take over.

Don't let the size of this contract mislead you. This was about the easiest decision the Angels have ever had to make.