The 45-year-old Seattle Mariners star announced his retirement Thursday night, shortly after waving goodbye at the Tokyo Dome during a 5-4 win over Oakland in 12 innings. Ichiro went 0-for-4 and was pulled from right field in the eighth, saluting his adoring fans in the packed crowd. He drew hugs -- some of them tearful -- from teammates in a three-minute walk that signaled to all his great career had ended.

The outfielder said in a statement after the game that he had "achieved so many of my dreams in baseball, both in my career in Japan and, since 2001, in Major League Baseball."

He added that he was "honored to end my big league career where it started, with Seattle, and think it is fitting that my last games as a professional were played in my home country of Japan."

Ichiro was a 10-time All-Star in the majors. He had 3,089 hits over a 19-year career in the big leagues after having 1,278 while starring in Japan. His combined total of 4,367 is a professional record.

After the Mariners took the field in the bottom of the eighth, all the players except Suzuki left for the dugout. Ichiro then waved to the crowd before leaving right field for defensive replacement Braden Bishop, who was making his major league debut. Ichiro received a standing ovation from the crowd and hugs from his Seattle teammates.

Ichiro struck out once. In his final at-bat, he grounded out to shortstop.

After the game, Ichiro received more handshakes and hugs from teammates.

Many expected Ichiro to retire after the Japan series or when the Mariners returned home for two spring training games with the San Diego Padres before the regular season resumes against the Boston Red Sox. 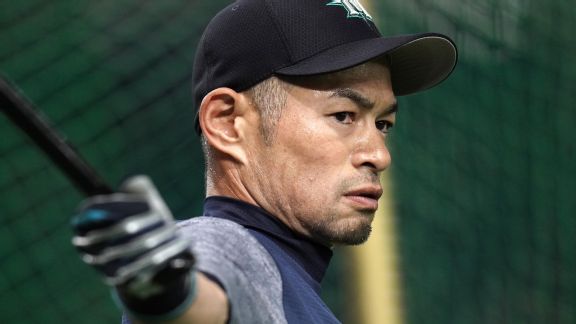 Japanese fans had been hoping it would not be the end of his career, but they knew it was likely. In Japan, many had thought his 2012 appearance with Seattle, when he had four hits in a game against Oakland, would be the last time they saw him play.

"Seven years ago, it appeared he had played for the last time in Japan," Fumihiro Fujisawa, head of the Japanese Association of Baseball Research, told The Associated Press. "I don't think anybody believed he would be active now."