The Book of Job begins with a board meeting of celestial beings. God's there. Satan's there. Satan wants to ruin a man named Job's life, to prove if his life gets bad enough Job will curse God. "Very well, then," God says, and the game is on.

Most of the rest of the book is from Job's perspective, as he tries to deal with the misery that has befallen him. But Job doesn't know about the meeting. Only people reading the book know about that. Job's trying to figure all this out without the glimpse behind the scenes that we got.

Juuust a bit outside ... 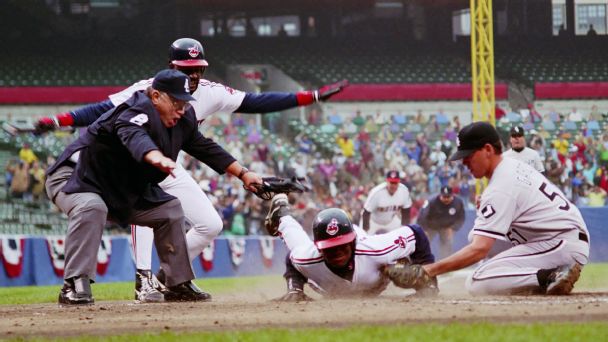 Willie Mays Hayes & Co. scored -- for the most part -- in the original "Major League" movie. The sequels? Um, no. Jim Caple »

"Major League" -- the hit baseball comedy that turns 30 years old this week, and that (on account of its R rating and my parents) I saw for the first time this month -- is basically the Book of Job, and is thus thoroughly timeless. It begins with a board meeting in which a powerful force (the new owner of the Cleveland Indians, Rachel Phelps) declares she is going to destroy a baseball team by loading it with junk, so she can get out of her lease and move to Miami. The story then shifts to the junk's perspective. They don't know they're the junk. They think they were chosen because they're plucky and have potential. The spiritual center of the team is a religious icon named ... ready for it? ... Jobu.

It's also a movie about losing on purpose, and is therefore still thoroughly modern. "Major League" -- and the Book of Job -- anticipated what we can call the Rebuild Era, or if we're being cynical about it, the Tanking Era. So on this anniversary, it's worth looking at what the movie was trying to tell us about it. Spoilers ahead.

In a 2016 profile of Theo Epstein and the Chicago Cubs, ESPN The Magazine's Wright Thompson recounts this story of the Cubs' down years:

While [execs] were planning for the future, the actual team stunk, losing 101 games in 2012. Epstein and his brothers-in-arms Jed Hoyer and Jason McLeod sat in their suite, which has a bank of televisions and half a dozen remote controls scattered about. While the big league Cubs got killed down on the field below, they watched the Cubs of tomorrow dominate in the minor leagues on those TV screens. Some nights, giddy about the future and about to go down into a losing clubhouse, they had to remind each other: Don't act too happy.

Epstein, et al., weren't rooting against the major league club, mind you, but their plans did involve strangling the team's hopes for the season by underinvesting. (By losing 101 games, the most in a half-century, those Cubs got to draft Kris Bryant the next June.) More importantly, their emotions didn't involve the major leaguers on that club.

The truth hurts! Realistic 2019 goals for all 30 MLB teams

We define a successful season for each major league club based on finding pleasure -- and avoiding pain. Sam Miller »

"Major League" anticipated the divide between front office incentives (lose) and player incentives (win), and ultimately concludes the arrangement is awkward and tense but the drama of the sport survives. The movie makes the case that, ultimately, the front office can't stop the players from trying hard, and that the strongest force in the sport is the players' hopes. Job wins, and it's glorious.

2. Crisis is an opportunity.

When owner Rachel Phelps dictates the spring invites, it's a surprisingly compelling group. For starters, the manager she orders her GM to hire -- Lou Brown -- is not a joke candidate. He is, we're told, a baseball lifer with 30 years' experience in Triple-A. And, when he sees his players in spring training, he declares to his GM, "That's my kind of team, Charlie. That's my kind of team." In other words, he's the perfect manager to develop young and raw players into pretty good players. Which is what he then does.

The players, too, fit the archetypes of high-upside plays that would fit in any book from "Moneyball" to "Astroball" to whatever -ball book gets written about the Braves or Phillies or White Sox in a few years:

• Pedro Cerrano is basically Chris Carter, a massively powerful hitter with an awkward swing path easily exploited by breaking pitches. The Astros had Carter during their doldrums years, and while he never quite turned into a really good player he got close. It was worth the gamble!

• Willie Mays Hayes is basically Tony Campana, an unstoppably fast baserunner and center fielder who just needed to learn to hit a little bit. The Cubs had Campana during their 100-loss season, but his incredible baserunning never found its full complement. But he also came close, and it was also worth a shot.

• Jake Taylor was basically Paul Lo Duca on the 2008 Nationals, or Jonny Gomes on the 2015 Braves -- a past-his-prime veteran with a reputation for clubhouse leadership. The value of that is always difficult to quantify, but few would totally deny it.

• And Ricky Vaughn is any number of electric, unrefined pitchers who could turn into an ace closer with the right pair of glasses and half the walk rate. He's Greg Holland on the 2012 Royals, basically. In real life, that one worked!

In the film, of course, all of them end up working, because it's a movie. (Hayes steals -- according to a count of batting gloves on his wall -- about 15 times in the first four months of the season and at least 60 in the final two.) But none of these players showed up to spring training without the talent. They just needed the chance to develop it, which, as it turns out, their cynical let's-lose-for-a-while owner gave them.

3. Even the executives are complicated, not evil.

GM Charlie Donovan: "You want us to lose?"

Owner Rachel Phelps: "No. We've been losing. What I want is for us to finish dead last."

It might seem weird to say this about a character who is presented in such a villainous way, and who the film humiliates so unrepentantly. But the film doesn't treat Phelps as wrong, exactly. Or dumb. For goodness' sake, she beat not only her own scouts but the rest of the league's in finding Vaughn, Cerrano and Taylor, the core of a pennant winner. She hired the manager Brown, whom her GM somehow hadn't heard of despite Brown's three decades of experience in the high minors. Cleveland's actual front office, it is implied, was signing terrible and overpriced players before Phelps came in to salvage the baseball operations department.

But beyond that: She was right in her premise. Cleveland had a terrible baseball team. It's not canonical to assume the "Major League" Indians were the direct descendants of the real-life 1988 Cleveland Indians, but according to the newspaper game stories that flash on screen during the club's winning montage, Julio Franco, Pat Tabler, Joe Carter, Ron Washington and Doug Jones were all on the "Major League" Indians. They were also on the 1988 Cleveland Indians, who had finished in next-to-last place, after finishing last the year before. While Phelps was adopting crass measures to get the team's attendance down below 800,000 -- so she could get out of her lease with the city -- the sad fact is, in real life, Cleveland had already drawn far fewer than that in 1983, 1984 and 1985.

In retrospect, the club looks a lot better than hopeless (thanks largely to the players she signed). But they probably got really lucky, too: The games we see were mostly blowout losses and narrow victories. We know they went 93-70, but their run differential in games shown was more consistent with that of a 50-win team. So Phelps inherited a team that had been terrible, was run by a terrible front office, was drawing below her lease-escape target already, and needed a run of small miracles to win 93 games and the division. Her decision to move to a publicly funded stadium isn't exactly a reason to name an airport after her, but you could understand her predicament. It's probably fair to say she was selfish, but not greedy.

Which of baseball's most unbreakable records might actually get broken in 2019?

74 home runs? 384 strikeouts? A 57-game hitting streak? History could be made this year, but some standards are more attainable than others. Sam Miller »

Here's the most convincing sign of the film's ambivalence toward her, though: An alternate ending of the film, included on the DVD, shows Phelps revealing the entire thing was "a ruse to motivate the team, as the Indians were on the verge of bankruptcy when she inherited them and she could not afford to hire star players or maintain the expensive amenities. She also tells Lou that she felt he was the right manager to bring the ragtag group together." The canonical version of the film didn't use this ending, because screening audiences hated it -- though the producers preferred it. Regardless, it proves the filmmakers believed everything Phelps did could be justified not only on cynical grounds but on pure, competitive grounds. All it would have taken was a short speech at the end, and her despicable actions could have just as easily been recast as heroic ones.

This, ultimately, is how "Major League" seems to feel about tanking, rebuilding, teardowns, #theprocess: It sucks, and it's not what we all want to watch. But it's a rational reaction to an irrational economic system. "If we could get anybody to come out and watch this team, this wouldn't be necessary," Phelps tells the club when her plot is revealed, and those are just the facts. "Major League" didn't invent the concept of a small market, a hopeless team, a World Series drought. It just came up with a rational, if unpleasant, strategy for getting out of it.

And then it came up with the more fun, more inspiring story for us to root for instead.