Trevor Bauer will tell you he's going to win the 2019 Cy Young Award. In fact, he has already said it. In a profile in Sports Illustrated a couple of months ago -- you should read the whole piece -- he told writer Ben Reiter:

From any other pitcher, such bravado would sound out of place. From the outspoken Bauer, a guy who got into hot water in the offseason for trolling a female college student with a barrage of Twitter posts, it's not surprising at all. He says what he thinks, which hasn't made him the most lovable teammate in the Cleveland Indians' clubhouse, but he also might be right about that Cy Young Award.

In his second start of the season, Bauer pitched seven no-hit innings against the Toronto Blue Jays in Cleveland's 4-1 victory, with the bullpen losing the bid for a combined no-hitter in the ninth inning. Len Barker's perfect game in 1981 remains the last no-hitter in Indians history -- the second-longest active drought in the majors, behind only the San Diego Padres, who have never pitched a no-hitter.

The Indians are batting .160 as a team and are uber-reliant on starting pitching. If you think Trevor Bauer, on a night he walked 6 dudes and in the 2nd freaking start of the season, should have been pushed much further past 117 pitches in the name of a no-hitter, please... no.

You might remember that Bauer gave up one hit in seven innings in his season debut against the Twins, so if my math is correct that's one hit (and one run) in 14 innings. That's backing up your talk. Bauer is only the second pitcher to go at least seven innings and give up one hit or fewer in his first two starts, joining Lon Warneke, who did it in 1934 for the Cubs with two complete-game one-hitters.

(Quick aside: Warneke won 192 games in an outstanding career and later returned to the majors as an umpire. He quit that after a decade, went into business and then became a county judge in Arkansas.)

Back to Bauer. He did walk six batters in Thursday's game, which ran up his pitch count to 117 and led to the exit after seven innings, so it was more one of those effectively wild no-hit bids than a purely dominating effort where the hitters have no chance.

Better control has been one key to Bauer's improvement since he led the American League in walks in 2015, so the six walks was probably just a blip. Based on last season's 2.21 ERA -- he had a chance at the Cy Young until a Jose Abreu line drive in August fractured his leg -- and his hot start this year, Bauer's Cy claim is hardly outrageous.

I was more curious about the claim of the effectiveness of his various pitches. Looking at all pitchers who have thrown at least 100 innings since 2018, let's see where Bauer rates based on weighted on-base average in plate appearances ending with that pitch:

Again, his claim wasn't that outrageous. His changeup and slider were dominant pitches and the curveball was outstanding as well. To be even more fair, of the pitchers ahead of him in curveball wOBA, only Aaron Nola and Charlie Morton threw more curves than Bauer's 789. (Based on run value on the pitch, FanGraphs ranked Bauer's curveball 16th best.)

So there's no doubting Bauer's offspeed stuff. His fastball, however, remains a pitch he nibbles with at times. Batters hit .261/.383/.383 against it last season with a higher walk rate (14.8 percent) than strikeout rate (11.8 percent). When he's forced to throw it when behind in the count, he doesn't always go right after hitters. That was the case against the Blue Jays on Thursday: five of the six walks came on fastballs (the sixth came on a pitch labeled a cutter). 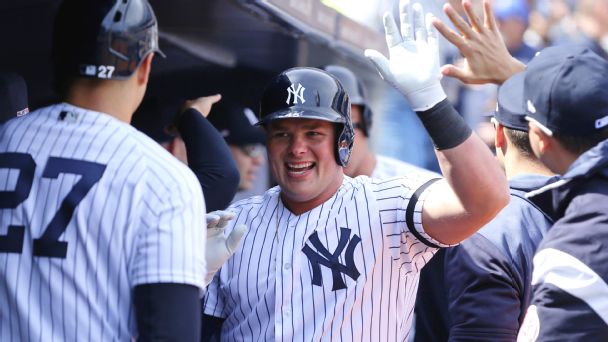 We've seen enough to know -- not much, really. But that didn't stop us from asking our experts to go out on a limb based on what they've observed so far. Roundtable

This could be a conscious decision, as he might be willing to give up the free pass and avoid challenging a hitter and giving up a home run or extra-base hit. It's a strategy that paid off last season as the extra-base hit rate against him dropped from 9.2 percent to 5.7 percent even as his walk rate remained the same.

Bottom line: Like him or not, Bauer has clearly moved into the upper echelon of starting pitchers. He talks a big game, but he backs it up.

The Reds can't hit: The Pittsburgh Pirates blanked the Cincinnati Reds 2-0 behind Jordan Lyles and three relievers, dropping the Reds to 1-5. The Reds are supposedly built around their offense, but the offense is stinking it up like it's 1835 when herds of pigs traveled the streets of Cincinnati and give the city its "Porkopolis" nickname.

The Reds are hitting .169/.249/.270 and have been shut out three times in six games. Jesse Winker finally got his first hit, Joey Votto is off to a slow start, Yasiel Puig is hitting .150, Matt Kemp is 1-for-13 with six strikeouts and no walks and Scott Schebler is 1-for-20 with eight strikeouts. The Reds play 23 of their next 35 games on the road. They need to get the bats fixed now or they could be buried by the middle of May in the tough NL Central.

Fried Cubs: Max Fried took a perfect game into the sixth inning for the Atlanta Braves in their 9-4 win over the Chicago Cubs, giving up only one hit over six scoreless innings.

The Atlanta attack was led by Nick Markakis, who became the second Braves player to go 5-for-5 with five RBIs, including three extra-base hits, in a game since the franchise moved to Atlanta in 1966, joining Andruw Jones, who did it on July 18, 2006 against the St. Louis Cardinals.

That's 41 walks issued in five games. A brutal start for the staff and new pitching coach Tommy Hottovy. Funny thing is, the Cubs are hitting .307 and are still 1-5.

Belated Freddy Peralta note: Forgot to mention this in Wednesday's roundup, but wanted to point out that Peralta pitched one of the best games in Milwaukee Brewers history, giving up two hits and no runs with 11 strikeouts over eight innings against the Reds. Last year, I wrote about the best-pitched game in franchise history for each team. The Brewers have the weakest slate of best games of any franchise other than the Colorado Rockies. Based on game score, Peralta's 89 is tied for ninth best in Brewers history for a nine-inning game. If Peralta had pitched the ninth inning and gone 1-2-3 with no strikeouts, he would have received an additional five points and tied Ben Sheets for the best nine-inning game score in Brewers history.