The sample size is now more than 10 games, and there is no denying that the numbers for the 2019 Boston Red Sox do not lie. They are ugly.

With the Red Sox finally able to play a game at Fenway Park on Tuesday, the question is: What type of reaction will they receive from their normally fervent fans?

"Cheers, I hope," David Price said. "I don't think anybody has ever gotten their World Series rings and gotten booed. So I think we'll get cheered." 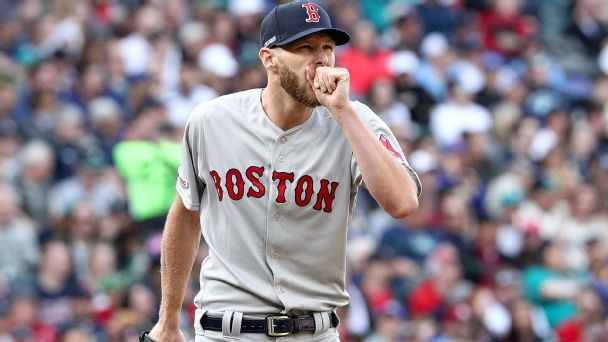 Chris Sale's velocity is down! Adalberto Mondesi is awesome! Strikeouts are up -- again! Does any of it mean anything?
Brad Doolittle

Consider the numbers. The starters' ERA is the most glaring issue facing the club. It is easily the worst in all of baseball. Red Sox pitchers have allowed more home runs than any staff in the game. Through 10 games, it was the worst start for a World Series champion since the stripped-down 1998 Florida Marlins. Sitting in the AL East cellar with a 3-8 record (along with the 3-8 Toronto Blue Jays) has to have many fans in New England on edge.

The Red Sox just concluded a season-opening, 11-game road trip during which they flew nearly 6,600 miles since leaving Fort Myers on March 24.

"Wow, that's a lot of miles on the engines," Jackie Bradley Jr. said. "We're just not playing together, not playing well as a team right now. We're not executing."

Along the way, the Red Sox managed just one victory in Seattle, one in Oakland and one in Phoenix before they finally head home to collect their World Series rings for what should have been a slam dunk of a glorious, championship-banner-raising home opener on Tuesday. Now who knows what the reaction will be?

The last time the Red Sox played in front of their home fans, they beat the Los Angeles Dodgers in Game 2 of the World Series on Oct. 24, 2018. Although the difficult trip to start the season would make for an easy safety net of an excuse, you won't find that being used by this group.

"We don't travel in the middle seats, and we don't stay in motels," manager Alex Cora said. "The way they treat us in the clubhouses is five stars, so it's what the schedule says, and it's 11 games on the West Coast. We are not making excuses. We're just not playing well."

Said Sale, who will start the home opener against the Blue Jays: "We played in the last game of the year, so there's obviously a longer effect, but like I've said, we're not going to say we're making excuses. I can't wait to get to Fenway. It's part of the business. It's what we signed up for. At a certain point, we have to show up and win."

The problems have been apparent, whether it's running the bases, serving up home runs or committing errors. Looking for a silver lining? The bullpen has not blown a save. Of course, it has had only three save opportunities.

Many times, the key issue facing a losing club is its collective psyche. It's a time when cracks can surface and doubts set in. Oftentimes, younger clubs whose players have little time in the majors suffer from this. For the Red Sox, that doesn't seem to be the case. Much of that has to do with the track records of most every player on their roster.

"We have a lot of guys in this clubhouse who have faced adversity and know how to handle it," Bradley said. "I think we all know what it takes to get back to where we want to be."

It's a theme that permeates through the Red Sox clubhouse.

"We have to find the right balance, and that hasn't happened yet,'' shortstop Xander Bogaerts said. "Every club goes through a patch of rough waters. Our problem is that our record is so magnified because the season is just starting. If it was July or August, we wouldn't be hearing the same things.

"We just have to find a way to win. We're confident because we can look around this room and see the amount of winning that we've done together and know it's just a matter of time before we start winning again."

The leader of this club who made things go so smoothly a year ago as a rookie manager, Cora, insists the issues are superficial, that nothing negative is taking root inside the clubhouse. Cora was a master at making sure his players realized that although playing and winning are important, it is vital to have a work/life balance, and the bigger picture is far more important.

"There's no frustration," Cora said. "We just keep grinding, we show up tomorrow. ... We will go home and see the family on Monday, hang out with your kids and all of that. Kind of put everything into perspective and move forward."

A rare victory -- even by the 1-0 final score -- on Sunday provided a respite from the negativity and also ensured that Sunday night's four-plus-hour trip back to Boston would be what so many players dub a "happy flight," a way to wash away the dark clouds and start believing this could be the start of the turnaround.

"It's always nice to win the last one headed home, you know, a happy flight," said Mitch Moreland, whose solo home run provided the Red Sox with the only run in Sunday's win over the Diamondbacks. "It was definitely a tough road trip, a tough way to kind of start the season. It'll be nice to get back home and get in front of our fans."

The beginning of this season couldn't be more different than what the Red Sox enjoyed last season, when they busted out of the gates with a 17-2 record and never looked back while running away with the AL East crown before plowing through the postseason with an impressive 11-3 record, losing only one game in each of their three playoff rounds.

Boston was in first place in the division for all but 12 days last season and never fell out of the top spot after June 26.

"It's frustrating," Price said of the current situation. "Everybody in here is frustrated, but we've been through a lot together, this group of guys, over the past two, three years. So we'll be OK. I think everybody in here understands that, and we have to take it one game at a time, just like we did last year when we won 108 games and 119 in the season, the World Series champions. We just need to get back home, and our fans will remind us how good we are."