Christian Yelich is not buying the Gateway Arch. He does, however, own the St. Louis Cardinals.

The Milwaukee Brewers and Cardinals have played five games this season and Yelich has homered in all five -- including three in Monday's 9-6 win, a three-run shot to cap off a six-run second inning, another three-run shot in the seventh inning to snap a 6-6 tie, then the clincher in the eighth:

Here are the seven home runs in order:

There seems to be a trend there ... in fact, his eighth home run this season came off an 87-mph fastball from the Cubs' Kyle Hendricks, so seven of the eight home runs have been off fastballs/sinkers of average velocity. In other words: Do not throw Yelich a mediocre fastball. Especially at Miller Park (all eight of his home runs have come at home).

Note that Yelich also has been especially adept at hunting fastballs early in the count. The home run against Hendricks came on the first pitch as well, so seven of his eight home runs have come on the first or second pitch of the plate appearance. Interesting. Did Yelich show the same patterns last season?

Yes and no. His home runs by pitch:

Yes, he hammered fastballs, but more than half his home runs came off secondary pitches. Of his 36 home runs last year, 17 came on the first or second pitch. That's 47 percent, compared to the MLB average of 37 percent over the past two seasons. 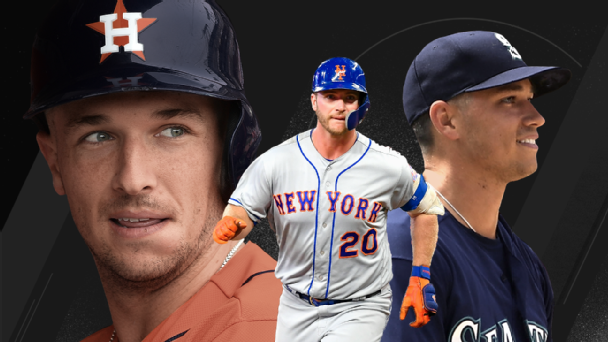 The Astros made a big move toward the top, but will they or any of April's hot starters still stand tall after this week? Power Rankings

• Over the past two seasons, Yelich is hitting .329/.457/.921 against the Cardinals with 13 home runs and 30 RBIs in 21 games. Yeah, I think we may start seeing St. Louis pitchers issue him a lot more unintentional intentional walks.

• It's the 21st time a Brewer has hit three home runs -- Oglivie is the only player to do it three times.

• Before the game, Yelich took extra batting practice at an empty Miller Park and told MLB.com's Adam McCalvy that "I feel like I haven't played good at all this year."

Umm, Yelich is now hitting .354/.449/.785 with 22 RBIs in 17 games and the Brewers have beaten the Cardinals in four of their five meetings. The teams will face off twice more in this series and three more times next week in St. Louis. The Cardinals need to figure out a better game plan. For that matter, so does the rest of the league.

Bonus Christian Yelich note: All that ... and before the game, Yelich gave a fan a new puppy:

UPDATE: They are going to name him Yeli. 🐶 pic.twitter.com/J95rP1Rh5m

Noah Syndergaard-Aaron Nola matchup fails to sizzle: The Mets beat the Phillies 7-6 in 11 innings on a brisk night in Philly that featured 24 mph winds. (It was so windy that Syndergaard had to keep his hair tied up in a ponytail.) The winning run scored on Rhys Hoskins' two-out fielding error (following an infield single and a walk), but the big story was that Nola and Syndergaard both allowed five runs -- something neither did last season in a combined 58 starts.

Nola is a bigger concern, as his numbers across the board are much worse than in 2018:

Nola's 2018 campaign was pretty remarkable. In fact, via Baseball-Reference, Nola -- and not Jacob deGrom -- was the best pitcher in the National League. His 10.5 WAR ranks as just the ninth 10-WAR season for a pitcher since 1980 and the best since Randy Johnson in 2002. I don't necessarily agree that he was better than deGrom; B-R is giving him a lot of credit for pitching in front of a terrible defense, which pushes his value above deGrom's.

Anyway, the surprise to Nola's start is that his curveball, which was so dominant in 2018, has abandoned him. Batters are hitting .348/.385/.522 against it after hitting .155/.192/.249 against it last season. His command has been poor across the board: Batters swung at 48 percent of his pitches last year, but that rate is at 39 percent this year as his in-zone rate has dropped as well. As with all these early numbers, we must remember that it's only four starts, but the Phillies will need a better version of Nola to headline the rotation.

Kershaw returns: In his return to Dodger Stadium, Yasiel Puig crushed a two-run homer off Clayton Kershaw in the first inning, but Kershaw then settled in and shut down the Reds the rest of the way in his first start of the season. Dave Roberts even let Kershaw bat in a 2-2 game in the bottom of the sixth with one out and nobody on -- a little strange, but Kershaw was sitting at just 74 pitches and had struck out the side in the sixth. He would finish the seventh throwing just 10 more pitches.

Clayton Kershaw's final line: 7 innings, 5 hits, 2 runs, 0 walks, 6 strikeouts. 84 pitches, 58 of them strikes. Only Yasiel Puig got to him. His fastball averaged 90 mph, but his breaking pitches looked sharp, and that will usually be enough.

Kershaw would leave with a no-decision and the Reds scored off Kenley Jansen in the top of ninth, only to see Joc Pederson deliver a dramatic walk-off home run for the Dodgers off Raisel Iglesias. Alden Gonzalez has more on the game.

At UCLA, Robinson was known more for his football, track, basketball and even golf -- he apparently won the conference championship -- than baseball, where legend has it he hit .097 during his one season on the Bruins baseball team.

Pretty cool cleats (Brian Goodwin of the Angels apparently also had UCLA shoes), but I think Delino DeShields Jr. might have Harper beat:

@UniWatch in the @Rangers game @LinoDeShields is wearing one clear that has Jackie Robinson's face and his time with the Dodgers shown, his other chest is Kansas City Monarch's themed, Robinson's team from his time in the Negro League #Jackie42 pic.twitter.com/Pa9t9wzBzg

Bad play of the day: Brandon Drury of the Blue Jays thought he had walked in the sixth inning, except he hadn't -- it was a 2-2 pitch, not 3-2. That led to Teoscar Hernandez getting picked off first base. You can see him heading back to first base, but then stopping once he saw Drury heading to first, so who do you blame?

You guys know that saying "you see something new at the ballpark everyday"?

This is that something new... pic.twitter.com/mLdhQQdQrn

Hernandez made up for the mistake two innings later: He belted a go-ahead, three-run home run, his first of the season, to give the Jays the 5-3 win over the Twins.

Twins catcher Mitch Garver, riding a hot bat with eight hits in his past 12 at-bats, became the second catcher to hit leadoff this season, following the Jays' Danny Jansen, who did it on March 31. It happened 16 times last season, 10 of those by J.T. Realmuto. Jason Kendall is the king of leadoff-hitting catchers, owning the top five single-season marks, including 119 games in 2004. Still, it's rare to see a catcher in the leadoff spot. Via the Baseball-Reference Play Index, since 1908 there have been just 94 instances when a catcher hit leadoff at least once in a season for his team -- but 38 of those came from a catcher who did it just once that particular year.

Garver is slow, but not super slow. According to Statcast, his top sprint speed in 2018 was equal to Manny Machado, Eric Hosmer and Joc Pederson. Garver does have some on-base ability with a .335 mark last season, so it's not a bad idea from Rocco Baldelli. Look for Garver to continue to get more playing time over Jason Castro.

Home run of the day: Chris Davis with his first:

The Orioles beat the Red Sox 8-1 to split the four-game series at Fenway. So, yes, just like we all expected, the Orioles are one game better than the Red Sox through 17 games.