When Christian Yelich showed up for the 2018 All-Star Game as a reserve, we all thought we knew who he was: above-average power, above-average speed, above-average defense, pretty good but unexceptional at everything. Yelich wasn't a superstar but certainly good enough to be, say, the fourth-best player on a championship team. 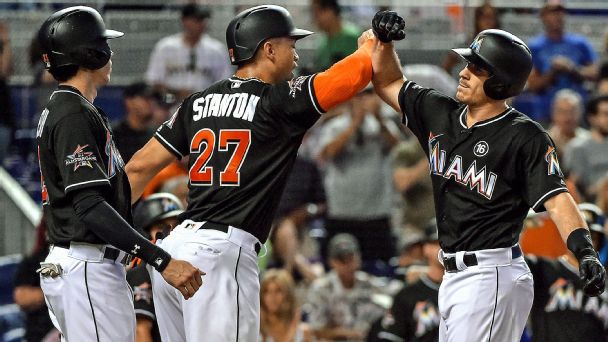 Of the 25 greatest players in franchise history, the Miami Marlins have now traded ... wait for it ... 23! Sam Miller »

But what Yelich has done is different. What we've seen the Milwaukee Brewers slugger do since July 2018 isn't necessarily unprecedented, but it is historic, because we've most likely just seen a player make the Hall of Fame.

A few years ago, I looked at how many WAR a player needed to produce by each age level to be more likely to make the Hall of Fame than not. In other words: Of all the players who had at least X WAR through each age, half made the Hall and half did not. We called "X" the 50 percent probability.

Through age 25, Christian Yelich was right on the bubble. The 50 percent probability mark for 25-year-olds was about 18 WAR, and Yelich had about 19. For 26-year-olds, the mark was 20 WAR. Through the All-Star break last year, Yelich had 21.

He was narrowly on the right side of the line, but you'd have probably been wise to bet against him. The probability mark is a bit of a logical fallacy, generously lumping in those bubble players with the surefire Hall of Famers who had many more WAR at that age. (If 50 percent of players with 18 or more WAR through age 25 make the Hall, far, far, far fewer than 50 percent of players with 20 or fewer WAR do.) The 50 percent probability is less a promise than a guide for figuring out which players' chances are most in flux, like Yelich's.

But Yelich's skill set was also not one likely to be recognized by future voters. He'd never led the league in any statistical category, never hit more than 21 homers or stolen 21 bases, never finished higher than 19th in MVP voting -- itself a good proxy for the sorts of things these same voters would reward a decade or two hence. The 2018 All-Star Game was his first appearance. His most comparable player through age 25, according to Baseball-Reference.com, was Chet Lemon, followed by Johnny Damon. Only one of his 10 most comparable predecessors (Dave Winfield) made the Hall.

Then the All-Star Game happened, and the players came back for the second half, and less than a year later the bubble candidate isn't really on the bubble anymore.

To understand how much Yelich's case improved requires a quick rundown of before-and-after snapshots. At the All-Star break last year, Yelich was hitting .292/.364/.459, and for his career he was a .288/.365/.435 hitter. By OPS+, he was around the 350th best hitter of all time (minimum 3,000 plate appearances), tied with Mike Greenwell, Shane Mack and Chili Davis.

Since then, he has hit .364/.451/.792. In just 400 plate appearances, his career OPS has gone up by 51 points, and those 51 points -- those 400 plate appearances! -- have moved him up more than 200 spots on the career OPS+ leaderboard. He's now ahead of Carl Yastrzemski, Tony Gwynn, Winfield and Eddie Murray. There are still plenty of non-HOF hitters around him, but remember that Yelich was always a do-everything player, and his raw offensive stats now join his baserunning and defensive value to make a player with elite value and bold-ink stats. He ended his age-25 year as the 143rd best player ever through that age by WAR. He ended his age-26 season 88th, with 26.5 WAR, ahead of dozens of non-controversial Hall of Famers. He's not a lock to make the Hall by any means; his career will also have to be built on longevity, as any Hall of Famer's does. But he's now on his way.

This year, he's third in baseball (behind Cody Bellinger and Mike Trout) with 1.9 WAR through Sunday. Just three more WAR this year -- in line with his pre-explosion career levels -- would push him past 31 career WAR, even further ahead of the Hall of Fame pace, which is about 23 WAR through age 27.

Which of baseball's most unbreakable records might actually get broken in 2019?

74 home runs? 384 strikeouts? A 57-game hitting streak? History could be made this year, but some standards are more attainable than others. Sam Miller »

And almost every fly ball he pulls is hit hard and far. Before last year's midway point, he had slugged .935 on flies. Since then, he has slugged 2.136. He has pulled four fly balls this year, and they've all been home runs. Before last summer, he had never had an OPS over 1.000 in a month. April is all but certain to be his fourth consecutive month over 1.000.

Was there a single swing, a single day, when Yelich became a probable Hall of Famer? Probably not. Maybe it was that swing in the All-Star Game that launched this torrid streak. Maybe it was the seven-hit series he had against the Dodgers coming out of the break, which set the tone for a historic second half. Maybe it was the two-day stretch he had against the Reds in August: two homers one day, six hits the next. Maybe it was September, to that point the best month of his career, when he hit .370/.508/.804 to clinch the MVP award. Maybe Game 1 of the NL Division Series, when he homered to break a scoreless tie and then, in extra innings, walked and scored the winning run.

Maybe it's this month, when he's as hot as you've ever seen a player and the league is finally giving up and starting to just walk him.

But if you can't tell your grandkids about one game, you'll surely be able to recount this four-month stretch, when we've all started watching every Yelich at-bat. We've realized that until 400 plate appearances ago, we didn't know Yelich at all. How grateful we should be that now we do.