You get the idea. Players of all abilities can have huge months -- not just the superstars. But we notice the big months more when they happen in April because we see the names at the top of the stat leaderboards. It's a reminder of what makes the game so magical: Mike Trout is Mike Trout because he does it month after month, but for one month, Kole Calhoun was Mike Trout. The line between one of the greatest players of all time and a veteran having a bad season is much smaller than we sometimes realize.

With that in mind, let's look at some of the early leaderboard surprises and decide if they can possibly keep it up.

Anderson hit .240 last season, and the surprising aspect of his start is that his chase rate has climbed 4 percent from 2018, when he was one of the biggest free-swingers in the game. It defies logic that an even more aggressive approach has worked, but his underlying metrics are trending positively compared to last season: His exit velocity is up, his hard-hit rate is up from 27.9 percent to 36 percent, and his swing-and-miss rate is down. There has been some good fortune -- his expected batting average heading into Wednesday was .315 -- but in general, his quality of contact has been very good.

Still, he's riding a .413 BABIP and has drawn only two walks. Javier Baez has succeeded with this extreme approach, but Baez has freakish bat speed and raw power. Even if Anderson sustains some of his hard-hit improvement, I think the high chase rate will haunt him, and he will fall under .300 by season's end.

To think the Mets spent the offseason trying to find ways to not play McNeil after trading for Robinson Cano and signing Jed Lowrie, but injuries to Lowrie and Todd Frazier opened up regular playing time for McNeil, and he's not about to lose it now.

He's what we might call a throwback player, given the current devotion among hitters to home runs. McNeil focuses on putting the ball in play instead of launching it in the air and has a strikeout rate under 10 percent. While he has just one home run, don't be fooled into thinking he's a soft-contact guy. His average exit velocity of 90.7 mph is the same as that of hitters such as Xander Bogaerts and Manny Machado. His expected batting average is .325, so he's hitting line drives and hard grounders. I would predict a .300 average, and given his doubles plus some walks, that's an effective hitter -- and a nice change of style in today's all-or-nothing game.

Mancini is hitting for both average and power (17 extra-base hits) after hitting .242 with 24 home runs last year. Where has that 100-point increase in batting average come from? In his case, it looks like it's all about launch angle:

He isn't hitting the ball harder, but he's hitting at more favorable angles. His ground ball rate has declined from 55.5 percent to 36.8 percent. That means more line drives and a higher BABIP. Mancini is not going to hit .342, but if he keeps the strikeout rate at 22 percent or below, he could be a legit .300 hitter.

Like McNeil and Mancini, Rosario is 27. Is the age-27 peak season still a thing? Rosario has always had elite bat speed and hit 51 home runs the past two seasons, so it's not as if this power surge is out of nowhere. He also hit four of his 11 home runs last weekend in Baltimore. Some of Rosario's numbers are up: exit velocity and what Statcast calls "barrel rate" (a hard-hit ball at the optimal launch angle). He remains an aggressive swinger, and six games against the pitiful Orioles pitching staff certainly helped.

Rosario also has always been a streaky hitter. He hit .350 with 15 home runs in May and June last year, then hit .259 with four home runs in July and August. He hit 16 home runs in August and September 2017. I can see Rosario topping 30 home runs for the first time, but I'm not convinced that he has the consistency to get to 40.

Santana's overall batting line isn't anything special -- .284/.349/.470, six home runs -- and he strikes out a lot, so you might guess that he has been clutch with runners on base. He has! He's hitting .417 with runners in scoring position. To his credit, his overall strikeout rate is 26 percent, but it's just 9.5 percent with RISP, so he appears to be making a concerted effort to cut down on his swing in those situations.

Glasnow was a popular breakout candidate heading into the season after he pitched pretty well with Tampa Bay down the stretch after the trade with the Pirates, but I wasn't so sure about that. He had a 4.20 ERA with the Rays and did start throwing more strikes, but he also allowed 10 home runs in 55⅔ innings and averaged just five innings per start.

Well, he's breaking out in a big way, and he's doing it basically with two pitches: an upper-90s fastball and a knee-breaking curveball. (He'll mix in a few changeups and sliders.) He has always had the big stuff but always made a mess of things with his inability to throw enough strikes. But now:

It's amazing what throwing strikes will do. I guess there's a chance the mechanics slip backward or something, but he looks like a Cy Young candidate.

The Gonzales bubble burst a little bit on Wednesday, as he had his first bad start and got knocked out in the second inning. Still, his ERA is a solid 3.28, and he has allowed just four home runs in 46⅔ innings. He might be even better if not for Seattle's league-worst defense, as his .313 BABIP against is a little high. His expected batting average allowed via Statcast data is .244; in reality, it's .273.

How new stars are taking over San Diego 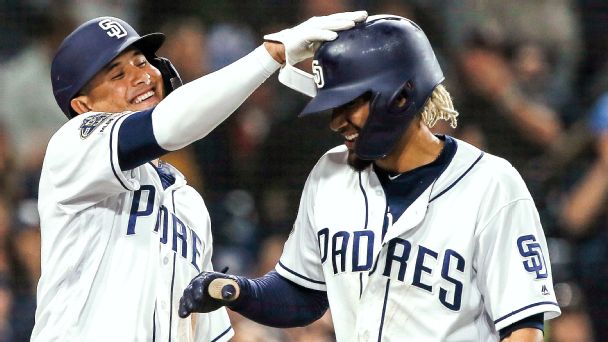 With a $300 million star and MLB's top prospect, San Diego is home to a team arriving ahead of schedule. Alden Gonzalez

His cutter induces some soft contact, which helps make up for a mediocre strikeout rate, and he's pitch-efficient, which helps him go deeper into games without getting to 100 pitches. Wins, of course, are somewhat team-dependent, and as the Mariners' offense cools down, he's going to find those wins harder to come by. I think he'll beat last year's 4.00 ERA, even with that atrocious defense, but he is not going to beat last year's 13 wins.

Yates was dominant last season, and he's off to a great start, with one run in 16 innings (with 25 strikeouts). Here's all the evidence you need: While poking around some of the Statcast data, I saw that he has the third-lowest expected wOBA based on quality of contact. He doesn't light up the radar gun (93-94), but the fastball/splitter combo has worked in the past for pitchers who didn't throw 93 (think Koji Uehara). He's good.