Here's one of the great contradictions in baseball: Modern reliever usage, most of us would agree, has made the game more static, more anonymous, more dawdling -- generally speaking, more boring.

But most of the good stuff also happens once the relievers are in the game. That's when baseball's biological diversity is most apparent, when its strategic adaptation is most in play, when the guys with the weirdest backstories are on screen, and when half the pitchers have You Can't Predict Baseball tattooed on their necks. It's also, generally, when the outcome of the game you're watching is most likely to be determined.

Following the sport requires following the bullpens, so let's survey the first month of the 2019 season in relief work.

The state of the closer

On Valentine's Day three months ago, three rebuilding teams -- the Royals, Orioles and Marlins -- announced they wouldn't necessarily name a closer this season. Not long after that, the Braves said they might use a committee to close games; the Twins were being "coy" about whether they would; and the defending champion Red Sox entered the season without a named closer. In the first two weeks of April, six Mariners relievers, and four Rays relievers, already had saves.

This is an annual spring ritual, and it typically goes nowhere. For various reasons, a handful of teams early in the season don't want to label one guy as better than their other guys; couple it with the longtime feud between statheads and traditional closer roles, and there will be a few teams that look like they might spearhead a movement. But almost inevitably, within a few saves one pitcher is collecting all of them for his team's bullpen, and that's that. You don't see that guy in the seventh inning anymore. You don't see anybody else getting up in the ninth.

Still, there are a lot of front-office executives who want the traditional closer role to go away -- to be absorbed into the larger trends toward nonhierarchical roster flexibility -- so it's never quite safe to assume this won't be the year. Even though it's never the year.

But maybe this is the year! Two years ago, the Ringer's Ben Lindbergh looked at each team's saves leader through April, and found that those 30 leaders accounted for just 79 percent of all saves. That was the lowest share in at least a decade, but there was also plenty of reason to wonder if it was a fluke. For one thing, it was just a small dip -- the average over the previous decade had been 84 percent -- and it came immediately after a 2016 season in which the reverse was true (saves leaders accounted for a higher percentage than any year in a decade). In 2018, the figure through April was 81 percent, still on the historical low end but a tick back up.

This year's 30 team leaders, though, accumulated less than 73 percent of all saves through April, a much lower share than in even the previous lowest year. This year, 83 relievers recorded at least one save by the end of April; the previous high in the 2010s was just 64 (last year), and the average in the decade was 54.

Clearly, teams are distributing their saves to more pitchers, and giving their closers less monopoly on the ninth inning. Some teams, meanwhile, still haven't named "a" closer, almost a quarter of the way through the season.

Three competitive teams -- the Red Sox, Rays and Twins -- have given multiple saves to at least their two best relievers. While the Marlins and Orioles appear to have fallen into predictable ninth innings (with Sergio Romo and Mychal Givens, respectively), the Royals have distributed their five saves to four pitchers. The Mariners haven't had a save opportunity in a while, but their distribution appears to still be undefined.

Of course, it'd be crazy to think the bulk of saves wouldn't end up in the hands of the few dozen best relievers. But in the ideal scenario, by making the closer role less rigid, the very best relievers would be available for a lot of those ninth innings and also other things: four-out saves, six-out saves, seventh-inning jams, eighth innings against the heart of the order, whatever. There's nothing inherently good about a closer by committee, unless it means the best relievers (traditionally, the "closers") can also be used successfully and aggressively elsewhere.

The Book of Jobu 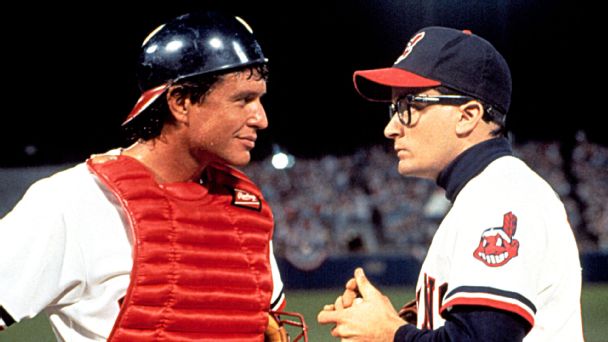 On its 30th anniversary, we look at how "Major League" predicted the future. Sam Miller »

In teams' first 30 games this year, there were 26 saves of four outs or more, not counting three-plus-inning saves. (Those usually come in blowouts, when a mop-up pitcher finishes the final three innings or more with a huge lead.) That's the most at this point in the season this decade -- as many as there were in the first 30 days of 2012, 2013 and 2014 combined. It's only a modest jump from last year, which was only a modest jump from the year before, which was only a modest jump from 2016, but put all of those modest jumps together and it starts to add up. The Brewers' Josh Hader is the pacesetter here -- he has three saves of two or more innings -- but 19 different pitchers on 17 different teams have at least one of these extended saves.

It is definitely too early to overreact. Most teams are still using a traditional closer, and most traditional closers are still pitching in the limited way closers do: Of the closers who've held their jobs all season long, about half have never pitched before the ninth inning this year. Ninety percent of saves have been three outs or fewer. And there is arguably nobody in baseball being used in the extreme (and extremely successful) way Hader was used last year, or Andrew Miller was in 2016 and 2017 -- part closer, part multi-inning fireman available from the fifth inning on. But there are signs that this time, maybe, some of these teams that pledged this spring to try something different in the ninth inning really meant it.

The state of bullpenning and opening

Fifteen, is that a lot? One answer is, relatively speaking, yes. At this point last year, there had been two. (The Rays didn't debut the opener until mid-May.) In most years before that, there were essentially none. So 15 is a lot more than that.

But it's only 15 games, out of more than 1,000 games started. Nine of the 15 have been by the Rays, and of the other 29 teams only the Angels (with three of these games) have seemed interested in using the strategy regularly for even a single spot in the rotation this year.

An update on 'Relievers Are Bad'

That was early. It's still early, but less early. Relievers still have a worse ERA than starters, by about 1.6 percent. That's less weird than it used to be, but still weird. A record 381 pitchers made at least one relief appearance in the first 30 games of this season, up from 350 last year.

Miami's Nick Anderson is 28, had never pitched in the majors before this year, and was traded by the Twins to the Marlins (for a minor leaguer) in November. He was a 32nd-round pick who spent three years in the independent Frontier League, twice with ERAs over 6.00.

He allowed five runs in his first outing in May.

The Blue Jays' Elvis Luciano turned 19 in spring training this year and skipped four levels of the minor leagues to make his big league debut. He's on the team only because of, essentially, a loophole in the Rule 5 draft that made him available to any team that would commit to keeping him in the majors all season.

The Blue Jays are trying to make that happen, and even if it's probably a disaster waiting to happen they haven't completely buried him at the end of the bench: Luciano has appeared 11 times and thrown 15 innings. He has walked 14 batters in those innings. He also has a 4.20 ERA, better than the league-average reliever.

The Blue Jays still have him.