Mike Trout is squarely in the passing-Hall-of-Famers-in-career-WAR-every-few-days period of his career. He is 27.

If I tell you that 27-year-old Mike Trout has more career WAR than, say, Roberto Alomar, you could hear it as an incredible tribute to Trout, but you could also hear it as a diminishment of Alomar -- and if we diminish Alomar, we diminish the power of the tribute. To really appreciate Trout, it helps to appreciate just how incredible the Hall of Famers he is passing were and to understand how it is plausible that Trout is already actually more valuable than they were.

Trout started May with 66.7 career WAR. With another fantastic month -- he hit .275/.427/.604, ended May leading the American League in WAR and raised his career mark to an even 68.0 -- he passed three more Hall of Famers. In Trout's honor, we will consider those three.

How good Alomar was:

1. The winner of 10 Gold Gloves at second base -- the most ever at the position -- Alomar "all but invented and popularized" the way many infielders play today, Buster Olney wrote in 2009. During his peak in the 1990s, Alomar was most famous for two moves: He shoveled "throws" straight out of his glove, either to his first baseman or to his shortstop covering second base; and he made jump throws, those leaping, twisting heaves when he had to throw against his momentum. "Alomar altered the landscape of what was possible for infielders," Olney wrote. "Some longtime scouts say they can't remember anybody playing in this style until Alomar came along."

2. In 50 years, Alomar is going to be one of the all-time "you just had to see him" players of the era. The hyperbole his contemporaries used when speaking about him -- if it was hyperbole -- was awestruck, even then: Alomar was "as gifted a player as you'll ever see," former Blue Jays GM Gord Ash said. Alomar was one of two players in the game, along with Barry Bonds, "who can do whatever he wants to do at any time," Tony Gwynn said. Tony La Russa called him one of the smartest players in the game, and Rafael Palmeiro said he was so smart he made every infielder playing with him better. "I can't believe anybody was better at second base than Alomar," a scout told Sports Illustrated in 1996.

3. Only 17 players were better at age 20, by WAR, and no second baseman was ever better at that age. And then, for a decade and a half, Alomar stayed at that level, always an All-Star, always fantastic, for four different franchises. He produced at least 2 WAR in each of his first 14 seasons, one of only seven players ever to do that. Were it not for the players' strike in 1994, he would most likely have been above 3 WAR in each of those 14 seasons, and only three other players (Jeff Bagwell, Barry Bonds, Frank Robinson) have ever done that. In all that time, it was hard to even say what his peak was -- his best seasons came at 33, 31 and 24 -- but if I could rewatch any stretch of Roberto Alomar, it might be the second half of 1993: He hit .348/.430/.534 after the All-Star break, then stole eight bases in 12 postseason games and hit .480 in the World Series.

How Trout is plausibly better, already: You had to see Alomar. You really had to see him. Because the defensive superlatives, advanced metrics say, were more about style than substance. His WAR says he was just an average defender (no shame there) for most of his career and then fell off significantly in his mid-30s. If you can't believe this, that's OK; in that case, Trout isn't plausibly better already.

But if you do believe it, then we get here: Alomar was the 18th-best 20-year-old ever, but Trout was the best ever. And Alomar produced at least 2 WAR in each of his first 14 seasons, but Trout has produced (other than during his abbreviated call-up at 19) at least 6 WAR for each of his first seven and is on pace to easily make it an eighth straight season this year. Alomar had a fantastic .300/.371/.443 line in his career; Trout has only had two months with an OPS that low. What if you took Hall of Famer Roberto Alomar and tripled his home runs? That's the Mike Trout story. Alomar's best season, by WAR, would be Trout's seventh best.

How good Banks was:

1. Banks once went 22 months -- from May 1957 through August 1960, nearly four full seasons -- without an OPS below .800. That's really good. But stacked against his peers at the position at the time, it makes for a staggering contrast. The second-best offensive shortstop in baseball at the time was probably Dick Groat, and his OPS during those four seasons was .738. Banks hit 176 homers over those full years, and they represented 43 percent of all the home runs hit by all the National League shortstops. Banks was to shortstops almost what Shohei Ohtani is to hitting pitchers: just a different category altogether. 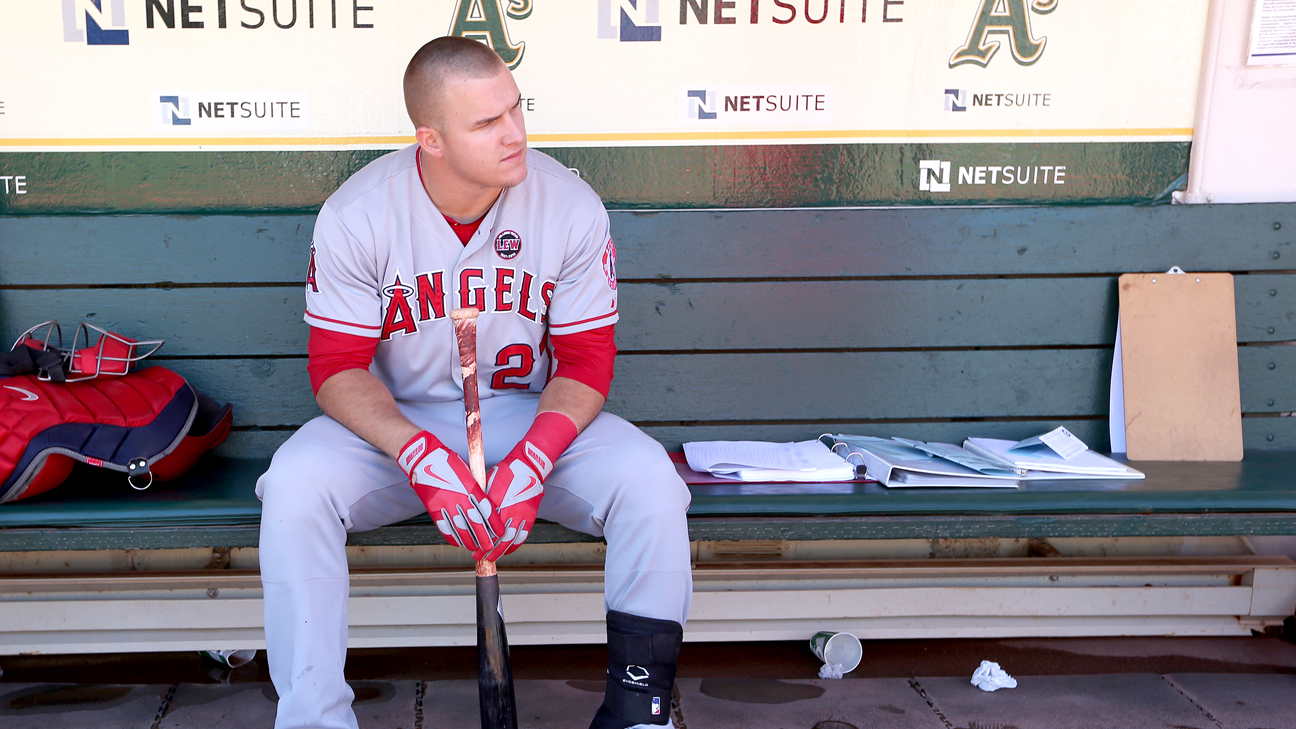 E:60 provides a rare, in-depth look into the life and legend of Mike Trout. Stream E:60

2. Before Alex Rodriguez came along, the top five home run seasons in history by shortstops were all by Ernie Banks.

3. The key thing with Banks, and for which he probably doesn't get enough credit -- especially in light of the second half of his career -- is how good he was defensively. The Gold Glove award didn't show up until midway through his career, but he did win one at shortstop, and he did deserve it. (The year before he won the award, in fact, he set major league shortstop records with a .985 fielding percentage and just 12 errors.) He did all this while playing every game every year, leading the NL in games played six of his first seven full seasons, crushing home runs and fielding every grounder long after the Cubs had fallen out of the race yet again.

How Trout is plausibly better, already: After the 1961 season, a year after Banks won his Gold Glove, the Cubs decided they had too many shortstops and started moving him around. He was awkward in the outfield (and hurt his knee crashing into a brick wall) and ended up at first base, where he spent the second decade of his career. The standards for offense at first base are much higher than they are for a shortstop, but beyond that, Banks just wasn't really the same player after the switch. He was just an average defensive first baseman, and he hit just .260/.308/.450 there. (He had hit .291/.355/.560 as a shortstop.) He was still able to contribute as a home run hitter, a team leader and the guy who (in 1969) came up with Let's Play Two, but his career WAR barely budged after he turned 31. His best season, by WAR, would be Trout's third best.

How good Clarke was:

1. When Bill James ranked Clarke 22nd among left fielders in his Historical Baseball Abstract, this was the capsule justifying Clarke's ranking:

Clarke was a player who lived by his wits, not that he didn't run well and hit all right. In one story, Rube Waddell, the simple-minded pitcher, was warned before the game not to let Clarke distract him from his pitching. Clarke, from the third base box, tried every kind of abuse he could imagine, without effect, until he switched suddenly into Rube's best friend. "Why don't you come out to my ranch in Kansas after the season, George?" Clarke asked. "I've got a pup out there you can train, and you can have him if he takes a fancy to you." "They all do," replied Waddell. "He's as good as mine." The next inning ... Rube was still thinking about the dog -- and the Pirates scored five runs.

2. If I'm reading his SABR bio correctly, he made the majors about five years after he started playing the game. "With the possible exception of Cobb and John McGraw, baseball never knew a sturdier competitor than Clarke."

3. It's weird to just glance at the Baseball-Reference.com page of somebody who debuted in 1894 and quit, more or less, in 1911. It's like trying to feel around in the dark while wearing oven mitts. There was no MVP award during his career, so there are no MVP results going down the right side of his page. There was no All-Star Game so no All-Star appearances, nor Gold Gloves. There are no intentional walks to signify a player was feared or was the best hitter in his lineup. No caught stealings, so who knows what to make of his stolen base totals. No real sense of what the style of play was like in those precise years -- was nine home runs a lot? Was four? Or how, in those decades of play, those styles were changing dramatically. Fred Clarke was a left fielder who once made 45 errors in a season and was probably the best defensive left fielder of his day. What even was that game?